For the first time in the ten years that I have lived in Devon, this summer there have been swifts roosting under the roof of my house. Three pairs, I think. Imagine those small white eggs - up there. After a while, tiny cries from under the slates in the evenings. Soft scuffling in the ceiling above my desk. Then one evening we see an adult bird peel off from the shrieking hunting party to deliver food - the high-speed flight directly at the wall, the last-minute throwing back of its wings and head, and forward of its body, an air-brake to stall its momentum in the last few feet before the wall; and then the sudden plunging disappearance into the tiniest of gaps in the building. All of this in a flash. What a choreography. It looks like an outrageous parking manoeuvre in a black feathery sports car into an imperceptibly minute garage at 70 mph. We set up chairs on the grass below to watch these flashing disappearances and re-appearances: far better than TV (although an episode of The World's Ugliest Pets or Can Fat Teens Hunt? is weirdly tempting).

When the fledglings first leave the nest, they may not touch the earth again for several years ...

Imagine that initial drop-dive into the air, never having experienced the world 'out there' before. Take nothing with you. Just fall into the air, and within a micro-second somehow know how to fly. Imagine.

The common swift (apus apus). Every May I look forward to the arrival of the swifts from Africa, and when they finally appear I feel honoured, wide-eyed, lifted up - and at the same time clumsy, a gravity-bound blob. Hours spent in the evenings watching their intoxicating fly-pasts, neck straining in the dusk. Reckless energy, precision flying, joyous screams. Speed, intensity and exactitude. A swift is a genius at being a swift. It drinks and eats and mates and sometimes sleeps on the wing. It builds nests from feathers and fragments of dry grasses in the air, glueing them together in layers with its spit. It harvests insects like aerial plankton. It drifts and spirals effortlessly at unimaginable heights (up to 10,000 feet), then roars through the upper reaches of 'our world' like a tiny jet. Their experience of the topography of rooftops, telegraph poles, aerials and trees is so utterly different from any human sense of this village. How do they slow down perception to take in the mass of information coming at them? What is the function of their cries - territorial expression? in-flight communication and orientation? echolocation in relation to the complexity of the architectures they pass through? sonic blasts to stun or somehow confuse their prey? And what do they make of us humans on the ground, staring dumb-struck and bewildered at the sky, our eyes always too slow to see much more than the blur of their passage? Every year I'm deflated and humbled when they leave on their extraordinary journey.

Swifts remain deeply mysterious to us; there’s such a huge amount we don’t know about them. We do know the broad shape of their epic migratory odysseys to and from Southern Africa, above holiday destinations and chronic war zones and banks of gunmen and through dusty thermals, but we know almost nothing of the particulars of this magnetic trail. We know that they move clockwise around low-pressure systems in huge arcs of up to 1,200 miles. In England, they fly towards the unstable air at the rear of a depression, into the insect-rich, warm rising air as the front departs. Young birds roost on the wing, circling at high altitude through the night until dawn. It is thought that they don't touch ground to roost until their 4th year, remaining in flight throughout their early lives. We know that they can fly enormous distances, an estimated average of 500 miles a day; so a 20-year old swift will have flown more than 3.5 million miles ...

They are only here in England for about 16 weeks a year; and they have become an emblem of summer. ‘They’ve made it again, which means the globe’s still working’ (Ted Hughes).

Our most common encounter is as witnesses to their wild, high-speed displays and their screaming passes (part of what ornithologists call 'social screaming-parties'). That black sickle, sky-trawling flight silhouette that looks, in Edward Thomas’s words in his poem 'Haymaking', ‘as if the bow had flown off with the arrow’ …

"And here they are, here they are again
Erupting across yard stones
Shrapnel-scatter terror ...
They swat past, hard-fletched,
Veer on the hard air, toss up over the roof,
And are gone again …
Their lunatic limber scramming frenzy
And their whirling blades sparkle out into blue – not ours any more” (Ted Hughes, ‘Swifts’) 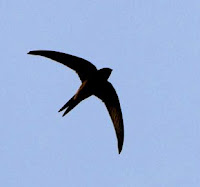 And now it seems the young birds have left the loft of the house. They must have set off four or five days ago and we never saw them go. Too slow. I look for them in the sky, and listen. Lots of jackdaws and housemartins, but not a sign of the swifts. It's too early, surely, they're too young, too small, too fragile to leave - and it's not even the end of July. Did they somehow pick up a whiff of the change in the weather, days before the storm clouds rolled in? How did they conceive of what lies ahead? How could they conceive of it? How did they know when, and where, to go?