‘The work of hope: notes on Daniel Hit By A Train'

‘Health to you, and don’t forget that flowers, like hope, are harvested’
Subcommandante Marcos, Our Word is Our Weapon (2001)

For this new collaboratively devised work by Lone Twin Theatre, Daniel Hit By A Train, the second in a trilogy of narrative-based performances directed by Gregg Whelan and Gary Winters with the company of five performers, once again we started with material that seemed a little surprising for artists who have so often articulated their commitment to optimism and practices of hope. While the first performance Alice Bell (2006) was triggered in large part by the group’s process of sharing stories of displacement, separation and loss, for Daniel Hit By A Train we drew on a little-known 19th-century London memorial to people who lost their lives attempting to save others. 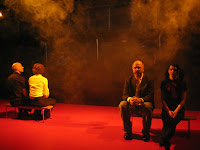 The ‘Watts Memorial of Heroic Deeds’, in Postman’s Park in the City of London, contains 53 plaques recording acts of impulsive bravery; and these became the focus of our improvisations, the lens through which we looked for forms, languages and rhythms. Taken together, the plaques comprise a catalogue of small disasters in the everyday, with momentous implications for the protagonists. Each plaque contains the bare bones of a story and of a collapsed, elliptical life: a name, a brief description of an action, a date. Some have the stark economy of an expressionist woodcut, for example: ‘THOMAS SIMPSON, DIED OF EXHAUSTION AFTER SAVING MANY LIVES FROM THE BREAKING ICE AT HIGHGATE POND, JAN 25 1885’. Others are small songs of impetuous selflessness; a few are disarmingly comic. Each of these cryptic fragments endeavours to remember the forgotten and to honour the attempt to intervene. And perhaps that’s one link with hope, and with Lone Twin’s work; they have consistently tried to honour the attempt.

Collectively these texts constitute a list, a form that Lone Twin has mined repeatedly and inventively over the past 11 years. The list as conjunction without continuity, as provisional and partial map hinting at lives and worlds, a kind of ruptured and unfinishable historiography that traces the contours and feels of lives and worlds. The list as resonant debris of the everyday, residual particles of the storm from paradise as we edge backwards into the future, like the ‘angel of history’. The Postman’s Park texts are in some ways reminiscent of other cumulative, serial texts that deal with everyday catastrophes – the anarchist Félix Fénéon’s remarkable Novels in Three Lines, for example, or the snatches of Berliners’ thoughts overheard by the angels in Wim Wenders/Peter Handke’s Wings of Desire. There are connections too with Andy Warhol’s obsessive engagement with the iconography and instruments of mortality in his Death and Disaster series. Perhaps above all I am reminded of a much-discussed passage in Charles Dickens’s Our Mutual Friend, a book awash with drownings, near-drownings and savings from the murky waters of the Thames. A much disliked character, Riderhood, is plucked unconscious from the river, then laid out in a nearby pub. “No one has the least regard for the man”, Dickens wrote, “with them all, he has been the object of avoidance, suspicion and aversion: but the spark of life within him is curiously separable from himself now, and they have a deep interest in it, probably because it is life, and they are living and must die”. In this way, Dickens suggests the mysterious allure of the ‘Life’ in life - life itself, beyond the particular individual – and his perception generates a complex, grained hope.

Lone Twin Theatre’s approach, however, combines a compassionate regard for the bottom-line human predicaments in these tragic stories, with a recognition that the most telling forms of respect and re-membering are often irreverent. True seriousness admits laughter and 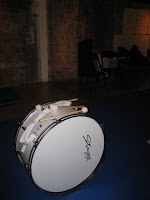 contradiction, and the task is to track the ‘Life’ in life to its lair, even in death. As a company, we have found some background stimulus in this regard in the forms and irreverent idioms of the medieval mystery play, the ‘dance-of-death’, the carnival procession, music hall, the village play, and other structures of popular community event. Memory in such contexts is the domain of hopeful and playful re-invention, rather than melancholy; irreverence is a sign of creative curiosity and experimental re-working. The rehearsing of 53 deaths here both admits to the fragility and contingency of human life, and celebrates our capacity to create multiple, temporary and provisional lives and worlds, and to share stories about them. So, theatre itself as a practice of hope.

In The Principle of Hope (1959), Ernst Bloch suggested that: ‘The work of hope requires people who throw themselves actively into what is becoming, to which they themselves belong’. What is the nature of the impulse to act at the moment of catastrophic accident? What drives someone into the fire, the path of the train or runaway horse, the sinking ship, the toxic pit, the sea/canal/pond/lake/river? What is at play in this instinctive self-forgetting? The triggers for action remain unknowable here. This list’s reiteration of selfless, active intervention and failure suggests something fundamental is at work here, another ‘story’ we hadn’t bargained for - and I’m not referring to some clumsily Freudian realisation of a suppressed ‘death drive’: quite the opposite. Some people seem to experience an unconscious compassion in the face of vulnerability and distress, a recognition that overrides conscious self-preservation. There is hopefulness at the heart of this recognition, in the attentive openness to the ‘becoming to which they belong’ (and Bloch’s phrase might well characterise Lone Twin’s body of work as a duo, as well as the ensemble work of Lone Twin Theatre). Such hopefulness is not betrayed by contingency and failure. For in the work of hope something of life is affirmed even in the dying - as it is in theatre, that most mortal of forms, forever hovering at the cusp of appearance and disappearance.

In her book Hope in the Dark (2005), Rebecca Solnit outlines her own pedagogy of hope, with hope conceived proactively, as an ‘act of defiance’: “Hopefulness is risky, since it is after all a form of trust, trust in the unknown and the possible, even in discontinuity. To be hopeful is to take on a different persona, one that risks disappointment, betrayal …Hope is not about what we expect. It is an embrace of the essential unknowability of the world, of the breaks with the present, the surprises … Expect to be astonished, expect that we don’t know. And this is grounds to act”. Solnit’s credo is one that might be applied to Lone Twin Theatre’s two performances thus far, both the single narrative arc of Alice Bell and the proliferative accumulation of stories in Daniel Hit By A Train. For here is a social practice that seeks, playfully and defiantly, to rub up against the unknowable and the impossible, the mortality of things and their ghosts, in search of sparks of life and other unforeseeable surprises. And always, at the very least, to honour the attempt. 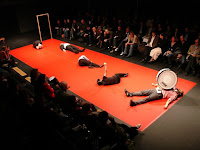