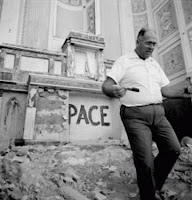 I've been reading about Danilo Dolci, the remarkable Italian activist and pacifist sometimes referred to as 'Sicily's Gandhi', and his work in western Sicily from the 1950s.

In Fire Under the Ashes (1965), an early biography, James McNeish describes Dolci's state of mind when he was called up for military service in 1951. At the barracks in Siena, he refused pointblank to do 'anything soldierly', only consenting to fire drill and gymnastics: 'No shooting, no bayonet practice'.

And he filled in the regulation questionnaire as follows:

PATERNITY: God
NUMBER OF BROTHERS: About a billion
NUMBER OF SISTERS: Ditto
PROFESSION: I'm learning to be consumed

A few years later, during one of his many hunger strikes (on this occasion to try to force political initiatives to fund a dam to help local peasants), he was asked by one of the local women: 'Child, why do you starve yourself like this?' His reply: 'Exactness and truth melt, and destroy evil'.

In the late 1950s, Dolci made a speech in Palermo: 'I believe that men will collaborate better as their thoughts, with the help of scientific analysis, are shorn of all rhetoric, superstition, complexes, dogmas of all kinds. Reality is complex. To understand it men have tried Christianity, liberalism, Gandhism, socialism. There's some truth in all these solutions, we're all mendicants of truth'.
Posted by david williams at 16:15 No comments: