so un holy (the farm shop) 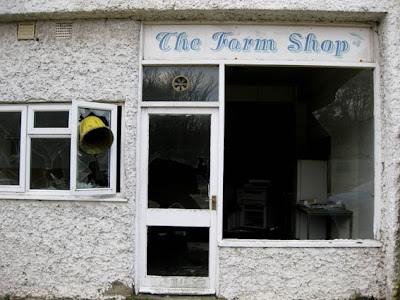 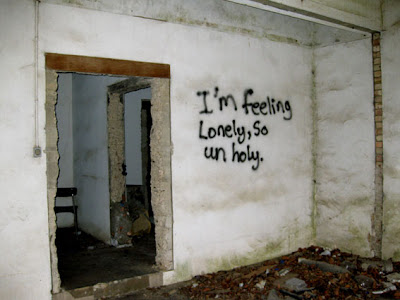 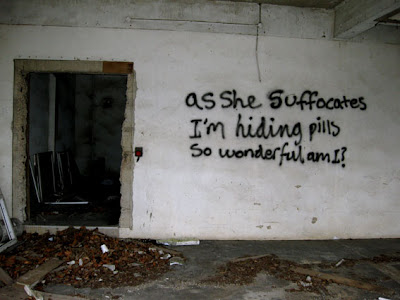 Trashed farm shop, with graffiti inspired by Portishead and I Haunt Wizards (Gnomzxx), in the village of Northrepps, Norfolk, January 2011. Photos by Sue Palmer

Posted by david williams at 18:04 No comments:


'Real names didn't mean anything to these guys. They didn't introduce by last names. I knew guys that had been hanging out together for five or ten years and did not know each other's last names. Nobody cares. You were introduced by a first name or a nickname. If you don't volunteer somebody's last name, nobody'll ask you. That's just the code. The feeling is, if you wanted me to know a name, you would have told me' - Joe Pistone (AKA 'Donnie Brasco').

The recent arrest in the New York region and in Sicily of more than 120 reputed Mafiosi from the five big families - Gambino, Colombo, Genovese, Bonanno, Luchese, as well as deCavalcante, di Maggio, Mannino, Inzerillo - brings to light some new 'made men' nicknames.

As a kind of addendum to an earlier post about Mafia names ('Little Charles the Cat Eater', 16 October 2008) - and with a nod at recent news that undercover British policeman Mark Kennedy's nickname among the environmentalists he infiltrated for 7 years was 'Flash' - the list below is drawn from last week's mass federal indictments in the US, in the wake of the FBI operation named 'Mafia Takedown'.

Meanwhile, I've been reading sociologist Diego Gambetta's fascinating Codes Of The Underworld: How Criminals Communicate (Princeton University Press, 2009), which devotes a chapter to nicknames. There's a great section about derogatory Sicilian nicknames, triggered by the fact that the Sicilian word for nickname - 'nciuri - means 'abuse'. Gambetta writes, for example, about a fishmonger known as Gioiellere ('The Jeweller') because his merchandise was said to be as expensive as diamonds.

Posted by david williams at 17:51 No comments:

the words that maketh ...


Four links to rather different kinds of material doing the rounds at the moment: all of them about language's constitutive power - what words do - and in particular the relations between language and violence.

They can be approached in any order.

Keith Olbermann on US television, in the wake of the shooting of Gabrielle Giffords - in a long forthright speech to camera, he dismisses the role of violence in political rhetoric within democratic processes: see here 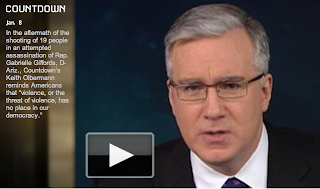 Martin Chulov in The Guardian (19 December 2010) with the extraordinary story of the Q'uran handwritten by a commissioned calligrapher using 27 litres of Saddam Hussein's blood over a period of two years in the late 1990s, and what on earth to do with it: see here 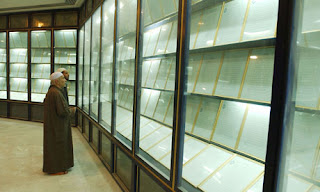 And finally, gently corrosive and hilarious guerrilla interventions in the streets of London by Charlie Veitch and the Love Police, megaphones in hand: 'Everything you read in the mainstream media is 100% true ...'

p.s. Here's Seamus Murphy on the making of the films for Polly Harvey's Let England Shake:

The album is a dense world of Polly's vision, but what interested me most was exploring the eccentricity and enigma of England. The present exists in a complicated relationship with the past and England's island status, and her relationship to her land, geography and tradition is fundamental to the country's psyche. Contemporary England springs from colonial adventures, military ambitions and industrial prowess. It is also shaded by fading power and its military role in modern geopolitics. To open myself up to a country I live in but rarely shoot, I took a road journey around England. I approached it as I would a foreign country, traveling wide-eyed with minimal equipment — light and alone. I documented life first-hand in classical reportage style, using available light and real-life situations, this time with sound and pictures. I normally have the still silent image as my universe. I photographed, directed and produced the films myself, and worked with editor Sebastian Gollek in Berlin to complete the project. The ballroom scene from Blackpool is one of my favorites; it has what I hope for in any project, to find the extraordinary in the ordinary and to be ambiguous enough to allow personal interpretation. I am not trying to deliver a message. Just showing what I saw, how I saw it and, sometimes, how I would like it to be.

For a pre-release stream of the entire album, see here.

Thanks to my friends Pete Harrison and Tim Etchells for a couple of these links, culled from their own web pages.
Posted by david williams at 15:19 No comments:

I first met David Bradby almost 35 years ago, as a first-year student at the University of Kent in 1976. Throughout my undergraduate course in French and Drama, David was my core tutor, teaching in both areas of the joint degree (and in their overlap). As a teacher, David was the most energized of enthusiasts, passionate about French culture, reading, and theatre as a social, political and aesthetic tool for thinking into and re-fashioning aspects of life. His ability to make ideas and practices available and exciting without diminishing their intellectual complexities was genuinely remarkable. Alongside a handful of other inspiring young lecturers, David opened my mind and changed my life. I still remember his playfully performative lectures and interactive seminar discussions about texts by Aragon, Sartre, Camus, de Beauvoir, Céline, Sarraute, Robbe-Grillet and Duras, and my wide-eyed pleasure at David’s accounts of Beckett and the Théâtre du Soleil. Then there were the trips he organised to Paris, taking a small gang of us to performances, drifts to the Buttes-Chaumont and other Surrealist sites, couscous in Belleville, and sorties with a wildly unpredictable young performer from the Théâtre du Campagnol whose flat we all shared.

For us as students, in addition to being massively impressed by his impeccable French and the relish with which he launched into it, David was intellectually challenging, illuminating, hilarious (at times mischievously so, eyes and smile a-twinkle), and consistently the most buoyant and invitational of encouragers. In particular, in those luxurious days of the lengthy one-to-one tutorial conversation around one’s own essays, he was rigorously attentive to the detail of thought and its articulation, and extraordinarily generous – lending books and journals, suggesting other materials and people one might pursue, making connections to one’s own performances as a student, and so on. Like the very best teachers, he invited us to listen closely to our own emergent energies and enthusiasms, and provided stimulus and courage for their further unfolding into a proactive engagement with ideas, practices, forms, people, and contexts. He was, quite simply, the best teacher I have ever had.

One of the qualities I most respected and enjoyed, particularly in his role as supervisor of my postgraduate research on Brook, was David’s wonderfully refreshing ability to deflate pomposity in the most generative and enabling of ways, never hurtfully (and I imagine David having a chuckle at my flounderings with this text). Somehow he was sensitively attuned to what I was up for in terms of critical feedback, and how best to pitch it and draw my attention to my own excesses or blind spots. One small example: in an early draft chapter, David pointed out a particularly ridiculous purple prose section I had written, an instance of a sort of bombastic verbal pebble-dashing that, in truth, meant very little. In the margin he wrote: ‘Who do you think you are – Melvyn Bragg?’ Reading this was like receiving the Zen master’s whack on the back of the head with the frying pan, only much funnier and entirely painless. I laughed and returned to the text with a new clarity and momentum.

Another related quality lay in David’s skills as a close-reader of diverse texts - in particular for me early on, French fiction. Through his articulate attention to the work that language does and the composition of texts (their architectures, weaves, motifs and ‘rhymes’; the implications of their ‘shapes’, etc.), David instilled in his students of French literature a sensitivity to the relations between textual forms and their possible/ multiple significations. As I told David when I last met him in Norfolk a few months ago, it was only much later on that I came to realize that this readerly ‘training’ had been invaluable to me for many years when flipped over into a quite different writerly context: that of collaborating as a dramaturg with theatre and dance practitioners (i.e. devising and dramaturgy as compositional practices of écriture scénique).

I feel immensely privileged to have been able to sustain a dialogue with David since those early years in Canterbury. For he has been an evolving continuity throughout my adult life: as undergraduate tutor, postgraduate supervisor, collaborator, mentor and long-term friend. As the emails to the SCUDD list in the wake of the announcement of David’s death attest, I was just one of many who benefited from David’s support, generosity and wisdom. It’s clear that, in the most open of ways, he was a great enabler and connector, facilitating countless opportunities for people in their professional and personal development. He gave so many of us big breaks in our lives - suggesting possible publication sites, engineering introductions, proposing projects and collaborations, supporting job applications by young scholars early on in their careers, and so on. And in reality there are lots of us who quite simply wouldn’t have been able to do what we’re doing today were it not for David.

In this apparently joyous and wholly a-territorial commitment to helping others - as in the quality of his scholarship, and his valuing of practice as a mode of enquiry – David will remain a model and challenge to us all in the years to come. His unflagging intellectual curiosity and momentum were always informed and contoured by deeply felt values: an unshakeable sense of responsibility to social justice, collegiality and exchange; a profound kindness, courteousness and warm-heartedness; and a sense of the very real pleasures, wonders and sometimes difficulties of living a life in relation to others. Although David is irreplaceable, a great person who will be sorely missed by those who were lucky enough to have known him, perhaps that’s one central component of the legacy he leaves his former students, colleagues and friends. An ongoing and unfinishable invitation to thoughtfulness, kindness, openness, dialogue, at every level … 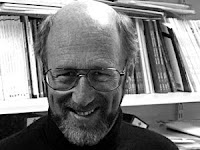 This text was written at the invitation of Caridad Svich, as part of a forthcoming issue of Contemporary Theatre Review, with tributes to David Bradby by former colleagues and friends including Maria Delgado, Dan Rebellato, Carl Lavery, Alan Read and others. I reproduce it here in the wake of David's funeral, on a freezing Saturday in north Norfolk, for David's family and many friends.

The photograph of David is by Joel Anderson.