"It only remains to speak of the desserts, something for which the City is famous. The cassata is a symbol of this reputation. But in its triumph of triglycerides and colours baroquely assembled, the cassata merely represents that with the City-dwellers wish to display of themselves. The equivalent to the traditional cart, a mass of ornaments and plumes.

As a general rule, the cassata is an old-fashioned sweet that is only bought as a present, to discharge an obligation, to make a payment in kind for some professional service. The same holds true for the buccellato, a repulsive variant on the strudel; it is given as a present at Christmas, a tiny bit of it is eaten and the rest goes into the dustbin before Epiphany.

This is because on the Island pastries, almost all of them of Arab inspiration, are very high in calories. They might well represent a nutritional experiment for astronauts, the way they address the need to contain the maximum nutritive value in the minimum bulk. A slice of cassata is the equivalent of a full meal.

The same is true of cannoli (cream horns) and other local specialities - line them all up and they make a whole nursery rhyme of assorted sugars adapted to the various times of year and the requirements of the calendar: melon ice, blancmange, martorana fruit, lamb-shaped meringues, kubbaita, honeycake, candied chestnuts, puma, 'ncilippati, sugar babies, mustazzola, cuccia (made with wheat flour, milk, sugar and cinnamon), minne de vergine, 'patate', sfinci di San Giuseppe, keys of St Peter, Sacred Hearts, Turks' heads, sammartinelli, reginelle and lastly the latest fantastic invention from a pastry cook in Via Colonna Rotta: the torta Setteveli, a chocolate confection destined to outlast the vagaries of time and taste.

The requirement for lightness envisaged by modern life leaves us to predict the extinction, or the preservation in a museum, of many of these sweet specialities. This fate has recently overtaken the 'Triumph of Greed', a high calorie bombe of green pistachio, compared with which the cassata is dieters' food. The last people to make it were the nuns in the Convent of the Virgins, at the back of the Teatro Biondo, and then only to order. A City legend claims that the milk used for the ricotta was produced by the nuns personally. Today the weight and elaboration of the 'Triumph of Greed' is still remembered, but even this memory will have been lost in a few years' time." 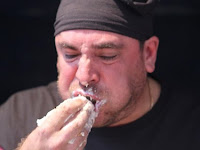 Posted by david williams at 18:45 No comments: 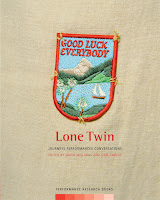