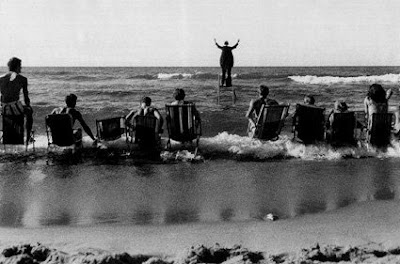 My dad has taken to sending me cuttings from the newspaper: invariably from the Times or the Telegraph, and usually obituaries of artists, reviews of art and performances he thinks I might like, and stuff about the mafia, Italian politics, crime writers etc.

A few weeks ago he sent me a lengthy rubbishing of Yoko Ono's exhibition at the Baltic. Today I received a piece cut from the Telegraph, entitled: 'My shocking encounter with a large naked lady - in a cage', by a journalist called Rupert Christiansen. It begins: "I have only to hear, or even read, the name of Tadeusz Kantor to feel a shudder down my spine ...", and continues in similar vein with a description of sorts of a Kantor event in Edinburgh some years ago that evidently appalled him. Purportedly the article is a preview of a retrospective exhibition of Kantor's work at the University of East Anglia's Sainsbury Centre, although its core purpose seems to be to tell us that Mr Christiansen "won't be attending, for fear of reviving my Kantorian trauma".

In the end, inevitably the text tells one a fair amount about its author and his particular perspectives on contemporary art, and very little about Kantor.

At the top of the cutting, my dad has written in biro: 'Have you met this nutter?!'

I wonder quite which nutter he's referring to. 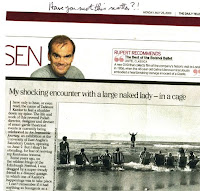 For details of the Sainsbury Centre's Kantor exhibition, ' An Impossible Journey', see here

For the Cricoteka ('Centre for the Documentation of the Art of Tadeusz Kantor') website documenting Kantor's work, see here

For Rupert Christiansen's 'article' in the Daily Telegraph (25 May 2009), see here 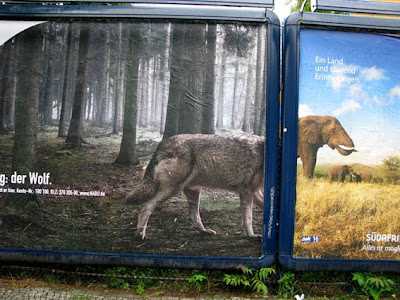 Posted by david williams at 18:07 No comments:

In Berlin for a few days to assess a performance made by Dartington students in Kreuzberg. On a wet afternoon, the director of the theatre takes me out across the River Spree to Treptower Park for a walk with her dog. We make our way through the park to the Soviet Memorial (Sowjetische Ehrenmal) to Russian troops killed in the carnage of the Battle of Berlin in 1945; 5,000 of the approx. 80,000 soldiers who died in Berlin are buried here.

In the slanting rain, past a huge sculpture of a grieving woman, the Motherland, then through the gap between two vast triangles of red granite - like stylised flag 'curtains' - to the sunken park that contains the Red Army soldier's mass graves. A series of 16 stone cube sarcophagi bear sculpted frescoes on their flanks, and quotations from Stalin (with German translations) at their ends: one sarcophagus for each of the Soviet republics.

The entire configuration leads towards a towering statue on top of a crypt or grave-like structure built from marble scavenged from Hitler's Reich Chancellery; about 40 feet high, this epic piece of Soviet symbolism created by the sculptor Yevgeny Vuchetich portrays a heroically idealised Russian soldier protectively cradling a small girl, the blade of his enormous sword cutting deep into a trampled swastika at his feet.

The entire memorial area is deserted, and its desolate emptiness amplifies its gigantism.

This is an instance of ideology's performative scenography, and it is extraordinarily potent as an affective spatial configuration. It leads one's eyes on a carefully constructed narrative trajectory to its focal points, while at the same time diminishing and humbling the living human body with its monumental scale. An awe-some and manipulative architecture within which the ideological extremes of communism and fascism come full circle and coincide in their aesthetics.

As part of a series of serial images in this blog, below are some of the sculpted friezes with their weathered and reductive two-dimensional versions of history's messy complexities. Historiography as monochromatic propagandist cartoon, yet these images are none the less effective and beautifully crafted for their absurd simplifications of the horrors of lived war-time experiences. 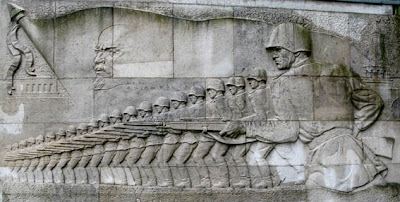 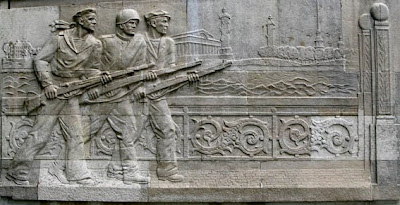 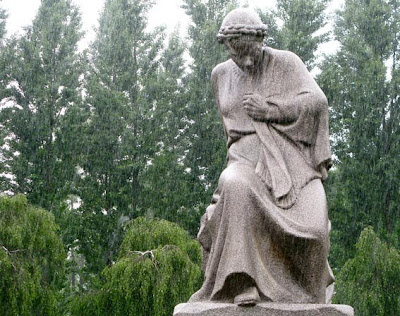 Posted by david williams at 15:05 No comments: