song for the decade 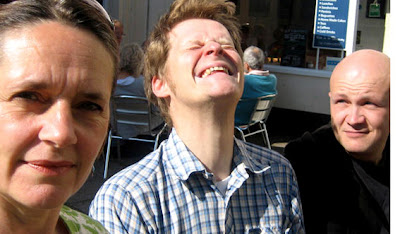 On its final evening, the festival culminates in appropriately celebratory and boisterous fashion in the main hall of the Kulttuuriareena youth centre, with a one-off performance of a single six-minute song written for and performed by a group of people from the city of Kuopio. The project proposition to mark the tenth anniversary of ANTI was ‘one week, one band, one song, one gig’. British artists Sue Palmer, Joff Winterhart and Simon Roberts (above), in collaboration with the Finnish musician-composer DaveForestfield, set out to gather one person aged from within each decade from one to a hundred - someone under ten, a teenager, someone in their twenties, in their thirties, and so on - and to assemble a ten-strong band. Forestfield drew on existing musical contacts in the city to provide a rhythm section from local r’n’b musicians as well as a well-known jazz clarinettist in his mid-seventies. Sue and Joff found other band members through chance encounters on the street, in a community centre and elsewhere, including a sixteen-year-old vocalist met while buying milk in a local corner shop. 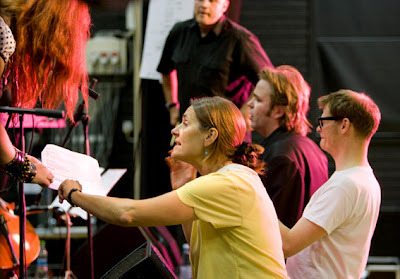 For Sue and Joff, such encounters with strangers were conceived to be as much a part of the ‘work’ as the song itself. They spent five days on the streets of Kuopio asking people whether they played a musical instrument, using this initial point of contact both as a mechanism for invitations to join the band and to generate material about Kuopio for the writing of the song. In the moment of performance of the song itself, a hilarious punk-pop reflection on ten years of ANTI, the band members’ pleasurable, energised engagement is palpable, realising some of the artists’ core concerns in this participative, inter-generational undertaking. In addition, a range of less visible connections and alliances are reaffirmed in the civic gathering around the song’s performance; for a significant number of those others encountered en route return to witness the performance as spectators, whooping and hollering as part of a broader temporary community celebrating ANTI, the band, the song, and new friendships enabled by unforeseen meetings with strangers. 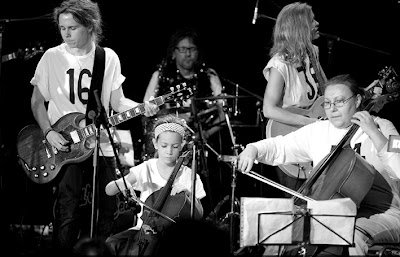 Photo by Pekka Mäkinen 2011
Posted by david williams at 23:59 No comments: