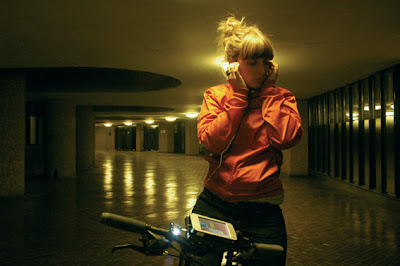 After a short briefing at the Festival Centre at Kummisetä, I set off into the mid-evening darkness on an unfamiliar bike along the streets, alleys and pathways of Kuopio, a city wholly unknown to me. Guided by the screen of a handheld computer console (Nokia N800) mounted on the handlebars, I listen to Ju Row Farr’s quiet instructions and questions through earphones. The task is to find ‘hiding places’ not yet occupied by others, to leave recorded verbal responses to trigger questions, and to access the audio traces that previous cyclists have left. So a choice of four possible modes for this game of hide and seek: ride, stop, listen, speak/record. During this solitary drift in search of virtual companions, in which my shifting position is located through WiFi hotspots, the onscreen imagery reveals places where other flâneur-cyclists have ‘hidden’: a porch, a car park, a clump of trees, the entrance to a college, a bus stop, a park bench. Swallows flit across the screen until an alert signals arrival at a location as yet unoccupied.

As rider, one’s focus shifts continuously: an outward negotiation of traffic, people (many dog walkers at this time of night), track surfaces, and of the spectral presences rooted invisibly in particular places, many of them deserted; and an inward trajectory inviting personal association, memory, imagination, reflection and their articulation. I am struck by the sense of vulnerability, gradually supplanted by a growing confidence and pleasure, in the anomaly of dismounting in the dark to listen in silence to an unknown voice whispering in one’s ear - or of speaking out loud on one’s own into a tiny microphone in the earphone lead, knowing that this sonic trace is now deposited to linger here invisibly, accessible only to subsequent networked cyclists pausing in this place.

Gradually, different orders of reality proliferate and blur, and a layered mapping of places, voices and presences starts to ghost and re-write the actual. Empty spaces become inhabited and peopled, sometimes mysteriously (a secret or promise delivered in Finnish remains entirely secret to me), sometimes surprisingly or comfortingly; and the fleeting company of a teeming virtual community of participant-author-strangers both reveals itself and remains withheld, unknowable. After an hour, my embodied trajectory has constructed a detailed web or palimpsest of the public and the private, the palpably literal and the imagined, the intimate and the distanced. I am happily imbricated in an interactive, dis/orienting chorale of confessional secrets, desires and fictions, as both witness and contributor to a work-in-progress archive: an unfinished register of the whispers of the world in a here that is both now and past, elsew/here and to come. 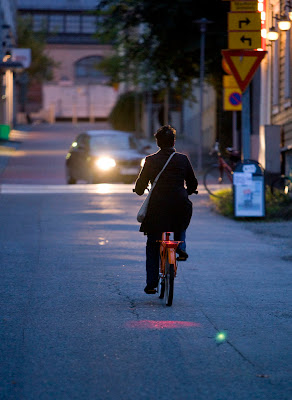