on the way to something else

It's late on Boxing Day, and I'm reading Thomas Pynchon's unnerving and hilarious magnum opus of channeled paranoia, Gravity's Rainbow - it's a section about a Boxing Day evening in another household somewhere in wartime England:

Inside the bowl, the two goldfish are making a Pisces-sign, head-to-tail and very still. Penelope sits and peers into their world. There is a little sunken galleon, a china diver in a diving suit, pretty stones and shells she and her sisters have brought back from the sea. Aunt Jessica and Uncle Roger are out in the kitchen, hugging and kissing. Elizabeth is teasing Clare in the hallway. Their mother is in the W.C. Sooty the cat sleeps in a chair, a black thundercloud on the way to something else, who happens right now to look like a cat. It's Boxing Day. The evening's very still. The last rocket bomb was an hour ago, somewhere south. Claire got a golliwog, Penelope a sweater, Elizabeth a frock that Penelope will grow into.

A page or so later, cut to Roger and Jessica in the kitchen, and Roger's fears of her leaving him for Jeremy:

Oh, he feels a raving fit coming on - how the bloody hell can he survive without her? She is the British warm that protects his stooping shoulders, and the wintering sparrow he holds inside his hands. She is his deepest innocence in spaces of bough and hay before wishes were given a separate name to warn that they might not come true ... 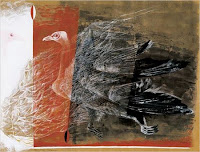 You go from dream to dream inside me. You have passage to my last shabby corner, and there, among the debris, you've found life. I'm no longer sure which of all the words, images, dreams or ghosts are "yours" and which are "mine". It's past sorting out.

We're both being someone new now, someone incredible ...

Posted by david williams at 23:50 No comments: