‘Deliver my soul from the sword: my darling from the power of the dog’ (Psalms xxii, 16) 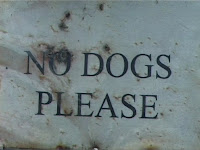 The Spanish title of the Mexican film Amores Perros translates as ‘lousy love affairs’ or more literally, ‘dog loves’ (Smith 2003: 9): ‘amor es perros’, ‘love is dogs’. In English-speaking countries internationally, where the film’s representations of dog fighting were controversial, it was released with the subtitle ‘Love’s a bitch’. Set in Mexico City, the film interweaves three narratives of love, desire, betrayal and loss, each of its three ‘chapters’ connected by an explosive car crash that implicates the central characters. In each episode, extreme situations are fueled by aberrant, destructive (‘animal’) behaviour, and violence simply serves to generate violence.

The working title of Guillermo Arriago Jordán’s original script was ‘Black Dog/White Dog’ (‘Perro negro/perro blanco’, quoted in Smith 2003: 32), and the tripartite narrative structure is informed by a complex web of doublings, in particular between rich and poor, and human and animal. This somewhat Manichean structure (which owes a great deal to television melodrama) is undercut by the ambiguous moral status of the characters – both human and animal - and the interpenetration of narratives, with some formal repetition of the same sequence from differing perspectives: the car crash, in particular. Although the meanings of events become unstable and proliferative, nonetheless a particular moralistic vision resides, a poetic justice of ‘pride before a fall’ and of violence revisiting its perpetrators and ‘biting them back’.

A core component in the construction of this contemporary morality tale of troubled mexicanidad lies in its representation of dogs. For they are centrally involved in all three episodes, and numerous parallels are established between human protagonists and their canine companions. All of them are imbricated in dog-eat-dog economic systems and their attendant anomie and violence. All of their identities are fragile and damaged, and they transform and unravel in the reiterated narrative arc of an enforced reversal of status (existential, moral, economic, and so on).

The first dog we encounter is the ambivalent Cofi, a black mongrel with more than a hint of Rottweiler: a devoted pet, a vicious killer, and, as an indomitable fighter, a meal ticket for Octavio (Gael García). He exploits the dog’s ferocious fighting abilities for financial gain before Cofi is shot during an illegal fight in an abandoned swimming pool by the aggrieved owner of his opponent. In the film’s opening scene, a high-speed chase sequence that culminates in the first of four perspectives on the car crash, Octavio’s friend Jorge desperately tends to the wounded dog in the back seat of Octavio’s speeding car with a group of gun-toting gangsters in pursuit.

Then there is Richi, the white poodle of model Valeria (Goya Toledo), the beautiful mistress of unfaithful, married advertising executive Daniel. Richi is utterly infantilised by Valeria who confers on him the surrogate child role that Deleuze and Guattari disdainfully dismissed as that of ‘the Oedipal family animal, a mere poodle’ (Deleuze & Guattari 1987: 250). There are evident metaphorical echoes in the fates of the model and her pampered lapdog as both of them fall dramatically from ‘grace’. Valeria’s demise is prefigured in her initial, innocuous, high-heeled trip on a hole in the shiny parquet floor of the new ‘dream home’ apartment Daniel has bought for her. In the wake of her car crash and subsequent surgery, eventually a gangrenous leg is amputated, and she is callously abandoned by her advertising company as the model-of-choice for a perfume called ‘Enchant’. Then with the swift and self-destructive collapse of her relationship with Daniel, she falls out of the world into devastated isolation as an invalid. Similarly Richi the poodle disappears into the hole in the floorboards, a ‘wound’ in the polished and orderly surface that has now spread, like Valeria’s gangrene. In turn, the dog falls into an ‘underworld’ of darkness, disorientation, horror and abjection. His scuffling subterranean whimpers as he tries to escape the rats proliferating just below the surface parallel Valeria’s psychic state, her slide into dismembered inarticulacy in a black hole of despair, buried alive with no possibility of escape. In Arriaga’s script, although not in the finished film, Valeria has terminated a pregnancy fathered by Daniel, and the loss of her ickle poodle represents another child, another ‘limb’ lost.

Finally, an itinerant loner, hitman and former guerrilla El Chivo (‘The Goat’: Emilio Echevarría) moves through the city with his entourage of stray dogs, a makeshift ‘family’ of mongrels including Flor (‘Flower’), Frijol (‘Bean’) and Gringuita: his ‘babies’. For much of the film, his attentive and generous co-existence with this ragged assortment of dogs sits in stark opposition to the dispassionate brutality of his work as a contract killer, and their interdependent companionship as outsiders lends frail dignity to Roger Grenier’s perception that: ‘A pet is a protection against life’s insults, a defence against the world, the somewhat vain conviction of being truly loved, a way of being both less alone and more alone’ (Grenier 2000: 23).

The fourth and final version of the car crash is seen from El Chivo’s perspective, and it is the only scene in the film in which the central characters from all three narratives coincide (or ‘collide’). It is also the trigger for a proliferation of parallels between narratives. Octavio is dragged bleeding and broken from the wreck of his car, leaving a trail of blood on the ground like so many of the dogs we have seen hauled from the dog fights. While his friend Jorge lies bloodied and dead in the front seat, Valeria screams and smears blood on her car window as her shattered body flails to break free from its entrapment in her shattered car. These most vulnerable, animal moments of ‘bare life’ are staged in public. The dog Cofi is dumped on the street with his open gun-shot wounds, then retrieved by El Chivo who carries him home and nurses him back to health: an echo of Daniel caring for the crippled Valeria. Finally El Chivo’s entire ‘family’ of dogs is slaughtered by Cofi, a horrifying massacre of the innocents that constitutes a traumatic turning point for the Lear-like vagrant: a transitional moment of reckoning en route to some sort of redemption. Ultimately he spares Cofi, renounces his life as a contract killer, and at the end of the film walks away with the loping dog into a parched, grey, featureless wasteland, an old man and his dog setting off towards a symbolic desert and an uncertain future beyond the city.

In a documentary supplement to the DVD about the making of Amores Perros, director Alejandro González Iñárritu reaffirms the metaphorical parallels and moralities enacted in the film’s narratives: ‘In this film, love and relationships with dogs are very deep. Dogs slowly resemble their owners, all owners look like their dogs and vice versa, and here dogs redeem humans, as in El Chivo’s case. There is a grand lesson in that sense’ (‘Behind the Scenes’, Amores Perros DVD 2001). He also discusses the controversial dog fighting sequences, an entirely masculine domain in the film, a theatre of harrowing, excessive machismo in which human beings fight vicariously through their canine stand-ins, then literally with each other. Each encounter is like a car crash in miniature, its impact substantially heightened by Martín Hernández’s soundtrack which interweaves ambient traffic noises, dog barks, and music. In his insistence on the humane nature of the treatment of the dogs in the filming of the fight sequences, González Iñárritu foregrounds the illusionist capacities of framing, shooting and editing, and the actual safety of those involved : ‘the same way I’d avoid hurting somebody in a car accident’ (quoted in Romney 2000). In this way, he forges a conscious connection between the dog fights and central car-crash. Perhaps inevitably, González Iñárritu tried to downplay the attention the fight sequences attracted internationally: ‘I wanted to make a film about Mexico City, where there are millions of dogs. The dogfight is a cruel reality. But more than the fights, we were interested in the relations between dogs and people’ (in Romney 2000).

As Smith points out in his monograph about Amores Perros (2003: 59 ff), critical responses varied enormously, reflecting national emphases and obsessions. So, for example, in dog-loving Britain, censors, critics and the RSPCA tended to focus centrally on the brutality of the dog fights, locating them as the purported ‘content’ of the film (a response that González Iñárritu was at pains to deny), thereby displacing the fictional instances of human suffering represented. There are contesting realities at play in the exchanges between the director and his British critics, who questioned the relationship between what is represented as ‘real’ and the reality of processes and actions on the film set; the bottom-line reality for them related to the apparent baiting or goading of live animals.

In the face of the initial misgivings of the British Board of Film Classification, González Iñárritu insisted it was all make-believe, simply an illusionist construction of the real: ‘the camera lies’, he reminded his knockers, ‘we used hand-held cameras to make it look a lot more dramatic. The dogs were just playing’ (quoted in Smith 2003: 60). In the recording of the fight sequences, animal combatants reportedly wore clear plastic gumshields to protect themselves and prevent them from hurting each other. Other dogs were sedated and made-up to ‘play dead’. The documentary supplement on the DVD includes a startling sequence that perhaps lends some support to the director’s play-ful perspective; two snarling dogs hurtle at each other in what seems to be unbridled, pent-up aggression, then as they meet one of them immediately mounts the other from behind and tries to have hurried, animated sex with it. Yet it’s hard to tell whether this is libidinous play or utter confusion on the dog’s part; it seems somewhat disoriented and fried by the heat of the situation.

Further ambiguities abound. According to González Iñárritu, the film’s dog trainers Larry Casanova and Ernesto Aparicio are ‘respected in animal welfare circles’ (Romney 2000), and used their own animals. However in the same interview he admits: ‘Thirty per cent of the people in the movie are real people from the dogfighting world, and we used some real fighting dogs. It’s shown the way they do it […] The people can be dangerous […] but I don’t judge them. For them it’s like bullfighting or going fishing – for them it’s natural, something you do on a Sunday’ (ibid). Furthermore, González Iñárritu admits that he was afraid of handling the dogs himself, for some of them were all too obviously dangerous: ‘These dogs are real motherfuckers’ (ibid). As opposed to make-believe motherfuckers, I guess. It seems he was not wholly convinced that all of the dogs on the film set were ‘just playing’ …