When I was 5 or 6, I watched my dad performing the role of Sir Thomas More in A Man for All Seasons. I thought he was brilliant. I lived richly. At the end of the play, after some sort of trial and some fine last words of which I have no memory beyond a kind of calm jaw-jutting defiance, my dad slowly dropped to his knees and placed his head on a block of wood; then a drum roll kicked in as a large man with a black hood raised an enormous axe … A still point in silence. Then, as the axe came down, sudden black out, a thud of metal on wood, and the sound of something rolling slowly across the stage … Oh no. My dad’s head had just been removed. That was the end of him.

I was distraught, outraged at the sudden horror and injustice of his demise. My mother tried to console me and shush me and wipe away my tears, but I wasn’t having any of it. Perversely, other people were turning round and smiling at me and my widowed mother. And my mother was laughing. It was very weird ... Minutes later, my dad reappeared for the curtain call, his head miraculously reconnected to his body. I was astonished, and gradually my sobbing gave way to relief and a wide-eyed incredulity. How did they do that? Later in the bar, I inspected my dad’s neck in great detail, but there was no trace of the axe’s passage. Honestly. You couldn’t even see the join. How did they do that?

‘In the realm of the naked eye nothing happens that does not have its beginning and its end. And yet nowhere can we find the place or the moment at which we can say, beyond a shadow of a doubt, that this is where it begins, or this is where it ends. For some of us, it has begun before the beginning, and for others of us it will go on happening after the end. Where to find it? Don’t look. Either it is here or it is not here. And whoever tries to find refuge in any one place, in any one moment, will never be where she thinks she is. In other words, say your goodbyes. It is never too late. It is always too late’ (Paul Auster, 'White Spaces', in Selected Poems, London: Faber & Faber, 1998, 83). 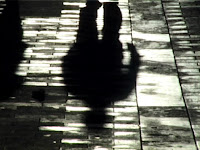 (Extract from 'how do you say goodbye? last songs': an invited presentation given at the symposium 'Goat Island: Lastness, raiding the archive, and pedagogical practices in performance', Nuffield Theatre, Lancaster University, 2008:
© David Williams)
Posted by david williams at 16:34