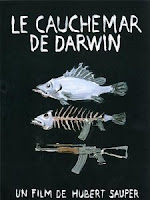 I have just watched a DVD of Hubert Sauper’s film, which details a genuinely horrifying web of connectivities, exchanges and inequities in a particular context of globalisation: on the shores of Lake Victoria in Tanzania. The lake has become an ecologically ‘dead’ environment due to the introduction of a non-native predator, the Nile perch, a voracious consumer of all other aquatic life: the legacy of a 'minor' scientific experiment gone awry (and a fiercely critical analogy for the brutal impact of rogue colonialism). Mammoth Russian Ilyushin planes, their pilots complicit in illegal international arms trade, roar in to deliver crates of munitions to be smuggled into war zones in Africa, before then taking white fish fillets to Europe for additional profits. One Russian pilot describes a job he’s about to undertake: delivering tanks to Angola, then on to Johannesburg to pick up a shipment of grapes to take back to Europe. He relays his friend’s words: ‘So the children of Angola receive guns for Christmas, while kids in Europe get grapes’. Wearily, he goes on: ‘”That’s business” … I would like all of the world’s children to be happy, but I don’t know how to do it … So many mothers …’

Meanwhile, as the film attests, entire lake-side communities are ravaged by HIV/AIDS, food shortages, the most abject poverty imaginable. In one place the grim by-product of the fish processing plants - stripped carcasses with only the eyeless heads intact – are sold to local people by the lorry-load, dumped in the mud, crawling with maggots. Young prostitutes, dependent on the pilots for work, smoke forlornly in deserted bars, then watch planes come and go across the water; in the course of the film, one of these young women is murdered. Street kids in ‘Fish Town’ (Mwanza) fight over handfuls of rice. Fish carcases are boiled by these kids to make glue for sniffing, to allow them to sleep as insentient as stones.

The film explores the terrible contradictions and consequences of one instance of a European exploitation of Africa’s ‘natural resources’, including its most vulnerable people, and details the emergence of a dysfunctional, toxic ‘eco-system’ on the shores of the lake. In Hubert Sauper’s words, “an ungodly globalized alliance on the shores of the world’s biggest tropical lake: an army of local fishermen, World bank agents, homeless children, African ministers, EU-commissioners, Tanzanian prostitutes and Russian pilots”. The ghosts of colonialism linger tenaciously in this most extreme arse end of international capitalism. This is globalisation’s ‘heart of darkness’, a ‘bare life’ reality which one might characterise by its ‘moral oblivion’, its impossible double-binds, its proliferative inequities and suffering, the blind-spots it encourages in those who 'benefit' in various ways. The ‘survival of the fittest’ here means those with resources, primarily the Europeans, and secondarily the short-term survivalist tactics of ordinary people with little real chance of self-reinvention and escape. The film records the shadow of entrepreneurial ‘success’, its disenfranchised, utterly unaccommodated ‘others’: what liberal capitalism denies and at the same time absolutely requires, its insidious 'underbelly'. Effectively a state of war is prolonged here by the machinations of rogue capitalism, perpetuating a relentless loop of poverty, disease, ecological disaster and conflict - so that in the end war itself is hoped for by some as a ‘job opportunity’, a potential source of money and food, a way out ...

After the film, I find further details about Lake Victoria and the pre-history of its ecological collapse in Verena Andermatt Conley's book Ecopolitics: The Environment in Poststructuralist Thought (London: Routledge, 1997). Conley writes:

"Lake Victoria [...] has fed millions of Africans for centuries on its diverse group of fish known as cichlids. Millions of Africans depended on the fish for their major source of protein. In the 1960s, the colonial administration of Uganda introduced the fast-growing Nile perch. Released into the lake, the perch ate all the cichlids and grew rapidly into marketable fish. One scientist likened the experiment to that of clear-cutting the rain forest and replacing it with fast-growing timbers. The cichlids fell from 80% to 2% of the fish in Lake Victoria within a decade. While countries around the lake now export 200,000 ton of Nile perch, its demand has driven prices beyond the means of tens of thousands of local people. Unlike cichlids, perch must be smoked, and which further diminishes the short supply of trees around the lake. Once again, the benefits of industrialization - that is, of export - have bypassed the poor. While a few Africans have grown wealthy, pressure put on the government by the European Community and the US to repay the debt have further impoverished the poor. In addition, the perch fishery is declining. The perch have eaten the cichlids and now have only each other to feed on. Cannibalism has become another link in the food chain, as adults feed on young fish. Millions of people are affected. Snails (schisotosoma) that transmit disease used to be eaten by cichlids. They are now developing undisturbed and threaten to spread disease. The loss of herbivorous cichlids has contributed to the spread of algae that such oxygen from the water and create hypoxic zones [...] Edward O. Wilson, author of The Diversity of Life (1992) [says that] never before has man in a single ill-advised step placed so many vertebrate species simultaneously at risk of extinction and also, in doing so, threatened a food source and a traditional way of life of riparian dwellers" (pp. 161-2). 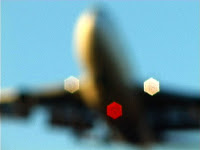