An overcast Saturday morning in October. At home in rural Devon, with a cup of tea in hand, a fire alight, today’s newspaper scattered on the carpet. A cat who sometimes visits unannounced for a game, a snack or a snooze licks her paws by the sports pages, then in a flash turns her head towards the window. Both of us inside, looking out. The garden. The apple trees losing their leaves. The edge of Dartmoor barely visible through the mist, like the back of a whale caught at the moment it breaches the surface. The sound of crows cutting across the muffled insistence of traffic in the distance, busy shouts over a steady grey current. A raven or is it a jackdaw, so black that it’s blue like Elvis’s hair, pecks into an apple, looks back at us, then wipes its beak on a branch. The blur of wings, then empty bouncing branch. After a moment of stillness the cat looks back down at the football headlines, seems to read for a moment. ‘Beckham right for England, says Wenger’. ‘McLaren era in danger of spinning out of control’. The murmur of the world out there.

Near the beginning of Uninvited Guests’ It is like it ought to be: a pastoral, the performers playfully construct a rural refuge: an imaginary spring in an imaginary village in an imaginary valley. A perfect (too perfect) English May is fabricated through a proliferatively layered soundscape of whinnies and moos and quacks and oinks and woofs; and a lyrical and abundant utopia materialises, outside of history. Here nature is ‘soft’ and ‘kind’, and there is no place for crows and ravens and the monstrous machinery of industry in this genteel bucolic fantasy. For we are in an idealised (and parodic) place of innocence, the ‘country’ - from the Latin contra, meaning ‘against’: the place that lies in opposition to the city, the (imagined) critical ‘other’ of urban chaos and anomie. All shout YES to the birds that sing, YES to the sky and clouds and sun. Later, as an approaching storm gathers momentum, Richard calls out from the top of a nearby hill, reporting back from the encroaching world he sees outside the valley. Like Walter Benjamin’s angel of history, he is confronted with fragmentation, the debris of a ‘storm in paradise’, the storm of ‘progress’. In Benjamin’s narrative, the winds of this storm blow the angel backwards into the future; here an apocalyptic whirlwind passes through the valley, and for a moment it is caught in the epicentre of the storm. From the garden of Eden to the Book of Revelations. Eventually light returns to the village, but this new dawn is no longer sentimental and idealised. Tempered by experience (of cruelty, chaos, contingency, modernity, mortality, history), weathered and fragile, the village has become more complex and contradictory. The lingering refrain of the final song - ‘it is like it ought to be, but it is not’ – suggests an uneasy tension between yearning for what’s ‘lost’ (the fiction of an imaginary innocence) and a desire for what ‘could be’ (an imperfect otherwise still to come, to be invented). The song itself rides on the ambiguities between lament and celebration, and bridges the axis between them through an acceptance of paradox. In turn, this is allied with a critical perception that what we lack is that which demands our present and future energies. In other words, rather than a naïve utopianism founded on nostalgia and escapist retreat, the performance stages another kind of utopianism - something perhaps closer to a measured, creative, play-ful collectivism that one might characterise as a practice of hope.

Viewed from a particular angle, the narrative trajectory of the performance resembles a myth or fable. For example, it tells a story of a Blakean innocence contoured and grained by experience; we witness a soul’s journey through a seasonal cycle whose winter is the tempestuous dis-illusion of a ‘night sea crossing’ en route to what Jung called ‘individuation’. The performance also speaks of the permeability of boundaries, territories and ‘islands’ - the valley, say, or England - as the ‘outside’ crashes in to become part of the ‘inside’ (where it always was anyway). In addition, it articulates the contradictions of history and post-modernity, and the impossibility of absolute withdrawal from their complex dynamics. In its forms and imagery, the performance draws on disparate British folk forms - ancient, emergent, re-invented, imagined – to ask what forms a contemporary community celebration might take. What might an English folk or pastoral theatre look like now, and what kinds of stories could it tell? What kinds of meetings and interactions with an audience might feed and reconfigure the event itself (the audience another conventional ‘outside’, like the weather, to be encouraged in here)? What are the relations between imagination, a yearning for celebration and an active critical intelligence?

The performance also references other cultural practices that seek to address loss and continuity, renewal and re-invention, the paradox of change as the only constant, the possibility

of economies of inter-connection and exchange. For example, the Joseph Beuys of How to explain pictures to a dead hare (1965), his head covered with honey and gold leaf as he cradled and stroked a dead animal and whispered in its ear. Or Jeremy Deller and Allan Kane’s Folk Archive (2005), with its inclusive revaluing of the vernacular and the ephemeral. Or Lone Twin’s playfully celebratory invitations to walk with them, dance with them, sing with them, in performances conceived as mechanisms for ‘meeting people’. All of these practices are social and political as well as aesthetic in their concerns. Like Uninvited Guests in this performance, they seek to explore and rehearse ways in which we might affirm the complexity of our lives in relation to others, while continuously re-imagining and reconfiguring our identities and traditions, and the stories we tell about ourselves in the light of this complexity.

Another raven, or is it a jackdaw, at the window. The cat slips outside. My tea is cold. It starts to rain. David Beckham smiles out at the world, ignoring the front page headline beside him: ‘Plot to hit UK with dirty bomb and exploding limo’. The murmur of the world in here.

In all of our valleys, it is like it ought to be, but it is not. 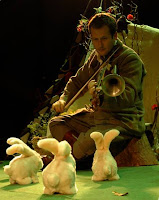 ('Songs of innocence and experience', originally published in tour programme for Uninvited Guests' It Is Like It Ought To Be: A Pastoral, 2006 - © David Williams. Photo © Uninvited Guests)
Posted by david williams at 15:17