In recent years, I have worked as a dramaturg with old friends Gregg Whelan, Gary Winters and their company Lone Twin Theatre, on the creation of a trilogy of performances. Two of those performances now exist: Alice Bell, which has toured extensively throughout Europe since its Brussels premiere in 2006, and Daniel Hit By A Train (2008), which premiered earlier this year in Vienna and will tour the UK in the autumn. The third and final part of the trilogy will be premiered in the autumn of 2009. The following two posts (23 and 24 July 2009) are programme notes written for the tours of Alice and Daniel: fragmentary maps of processes I still haven't fully digested, but am happy to linger with ...
______________________________________________

‘A falling together of accomplices’: Notes on the making of Alice Bell 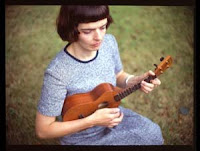 * A story is fashioned in the wake of events, this is central to how human beings synthesise the chaotic multiplicity of lived experience; an examined life is a life recounted, a ‘life-story’. And yet the telling itself can be an event in itself - the fashioning, staging and communicating of a world here now. This is what we dance around repeatedly and uncertainly, finding our way, then losing it again. ’How to get the real into the made-up? Ask me an easier one’ (Seamus Heaney).

* Looking back over Lone Twin’s performance work, it seems there are recurrent principles or propositions at play, and they have an unspoken matter for us in what we are trying to make here in Alice Bell. So, for example, in each Lone Twin performance something simple is made strange, unfamiliar or difficult, then worked through in order to reach a sense of accomplishment. Each work is an ‘act of folly’, and yet somehow hope-ful and joy-ful, a ‘labour of love’ as Barry Laing has described it. For every work is a structure to make contact with people and to seek their help. The invitation implicit in these practices of hope asks: walk with me, talk with me, dance with me, meet me, be my accomplice for a while, share this with me, it will help me. Love requires effort and an acceptance of vulnerability. Be here with me now. Maybe it will help you too. There is always the possibility of joy.

* I’ve been reading Richard Kearney’s On Stories (2002), and his articulation of an ethics of storytelling and of inter-subjective imagination is compelling in the face of those millennial

anti-humanists who declared the ‘end of narrative’ (as well as of history and ideology). ‘The story is not confined to the mind of its author alone’, he writes. ‘Nor is it confined to the mind of its reader. Nor indeed to the action of its narrated actors. Every story is a play of at least three persons (author/actor/addressee) whose outcome is never final. That is why narrative is an open-ended invitation to ethical and political responsiveness. Storytelling invites us to become not just agents of our own lives, but narrators and readers as well. It shows us that the untold life is not worth living. There will always be someone there to say, “tell me a story”, and someone there to respond. Were this not so, we would no longer be fully human’.

* Graffiti seen today on Berlin walls: ‘I’d rather laugh, all day’. And: ’My mother taught me well, so I rebel’. Also, alongside a stencilled banana: ‘One glass of water illuminates the world’.

* The politics and ethics of collaboration – everything is at stake in how we meet, listen, respond, how we are there with and for each other. How to live with others, loving something of their difference, their elsewhere? How to make the friction of difference part of the grain of a collective articulation? And how to invent the conditions for invention? How to invite people and forms and languages to come into conjunction, creating the time and space for them to co-exist? How to care for what we inject into the collective bloodstream, and to enable it to reverberate in ways that are more than the sum of its parts? How to be responsible for this story of love, transformation, betrayal and forgiveness, and to wear it on our sleeves with compassion and generosity rather than nudge-nudging and winking through the lens of a world-weary cynicism? 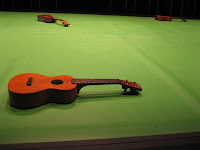 * Gathered around a laptop in a stairwell in Berlin, the only place we find to pick up a wi-fi signal on a Sunday afternoon, we watch online videos of the Gillian Welch/David Rawlings band, and of Bruce Springsteen with the E Street Band. These serve as points of reference in terms of investment, attitude, energy, presence. Something is palpably at stake in the work of it. As Gregg says, something is ‘crucial’, it’s not just a relaxed good time. Something has to be made to happen, and we recognise the engagement, the quality of attention and of listening. And we root for them, just as we do for Tim and Dawn in the final episode of The Office (another point of reference here). ‘You have to step it up out of the familiar’, Gregg says, ‘you have to step up to the plate’.

* In Michael Ondaatje’s In the Skin of a Lion, one of the central characters Patrick proposes a kind of dramaturgy of the band, where the interweavings of self and others within musical structures offer a model for dynamic, connective relations between the individual and the collective. Cornet, saxophone and drum ‘chased each other across solos and then suddenly fell together and rose within a chorus’. Patrick recognises how ‘each one of them was carried by the strength of something more than themselves’. Here the collaborative meeting place of the band is ‘perfect company, with an ending full of embraces after the solos had made everyone stronger, more delineated. His own life was no longer a single story but part of a mural, which was a falling together of accomplices … a wondrous night web’. This is a metaphorical mapping of possible inter-relations in the construction of both narratives and identities. Although we have long since left Ondaatje’s novel behind, nonetheless this musical ideal lingers on to ghost so much of what we seek as a company in this performance.

* In discussions about the speaking of texts Gregg and Gary talk of sentences as sculptural ‘objects’, each one an entity of a particular shape and weight to be placed alongside each other in a public space as if they were components of a ‘report’. Molly Haslund, who plays Alice Bell, describes her score as a performer as being made up of structures like karate ‘kata’, tasks of a particular form and rhythm to be embodied and fulfilled. I think of the poet Alice Oswald talking of each line in a poem as a stone, and of the poem as a ‘dry-stone wall’: a composite or aggregate entity, hand-made from found materials, within which each component has a certain self-sufficiency, a certain suchness, to be encountered and contemplated in relation to the whole. 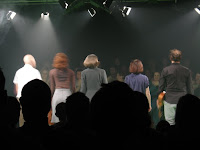 * Peter Brook once said that, when his international group first started performing in Paris in the mid-1970s, people often asked them if they were amateurs. Although the performers were slightly miffed, Brook was delighted. He was after a kind of sophisticated children’s theatre comprising diverse, legible, storytelling forms and performers whose differences flared into visibility. ‘Amateurs’ in the old sense of the word: lovers of stories coming together to meet in the telling, each of them implicated in making it take (a) place in the present. This relates to something at the heart of my pleasure in working with Gregg and Gary, and now with this new company; here too ‘naivety’ and the ‘amateur’ are qualities to be worked and affirmed and celebrated, and it’s often uncomfortable in terms of my own received ideas. It’s like hanging out with two disarmingly smart (and hilarious) kids whose perceptions unsettle and surprise, and invite me into elsewhere and otherwise. An encouragement to think and re-think through shifting position and unexpected contradiction, rather than the surface rearranging of prejudices that so often passes for thinking. 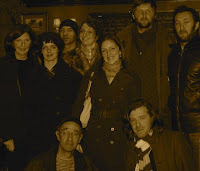