Walking down the hill through the middle of Totnes today, I encountered a stalled lorry blocking the road. It had obviously wheezed its way up most of the hill, and expired. The trailer read ASSORTED GLASS. As I passed by, I noticed a stream of milk pouring out of a gap under its rear doors, then trickling into the gutter. Gallons of it. A river of split milk coursing through Totnes. Like a long liquid finger tracing a luminous line through the traffic to the River Dart. 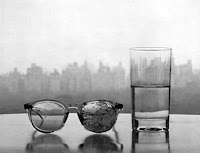 black-and-white
I have a photograph in front of me, taken from the interior of an unknown room in New York.

Through the window, the downtown city skyline is a faded grey blur in the middle distance, afternoon shadows there and not there. Could be a forest. Could be a water stain. Could be a mirage.

On the windowsill inside the room, much more imposing than the fugitive city, a glass of water, half empty or half full: a lens that quietly distorts the spectres in the distance.

Beside it, a pair of glasses balanced on the frame and arms, staring unseeing towards the viewer. The left-hand lens offers a perfectly focused miniature of the window sill’s rim and the skyline beyond, a tiny framed world. The right-hand lens is splashed with a dark liquid, an impenetrable blur like spilt paint. Or blood. An obstacle to seeing. One eye maimed, the left eye.

The photograph, called ‘Season of Glass’, was taken by Yoko Ono. The glasses were worn by John Lennon when he was shot. So. New York. Central Park. The Dakota Building. December 1980.

The memory of glass.
The glass of memory.


into sand
As fragile as a dragonfly’s wings, a reflection in water, a promise. As brittle as a web of caramel, a pencil tip, a confidence. As transparent as the blue soup of the sky, as silence. Can be fashioned through fire into any shape and size and colour: a tiny crimson chimera, an imposing gold wave, a shimmering periwinkle veil. Can be used to contain, to frame, to enlighten, to focus, to build, to decorate, to stimulate, to protect, to obstruct, to warn, to pierce, to cut. Can be broken by dropping, throwing, crushing, colliding, the shock of water too hot, water too cold, polishing, touching, the clumsy fingers of forgetting. If left for long enough, will eventually break down into particles of sand.

the floors were mirrors that reflected the sky

outside everything was less shiney, slightly larger and the right way up

it would take her a while to get used to it