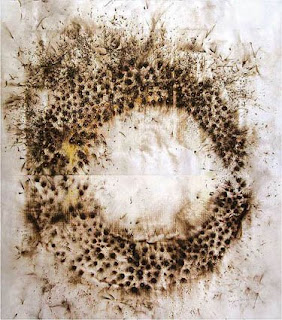 Over the past fifteen years or so, Chinese-born conceptual artist Cai Guo-Qiang, currently based in New York, has generated a series of over 30 works collectively entitled ‘Projects for Extraterrestrials’. Most of these projects involve a generative tension between creation and destruction in the Big Bang of gunpowder – an ephemeral event of material transformation (gunpowder is a Chinese invention, its Chinese characters signify ‘fire-medicine’). All of these projects are intended to be viewed from an ‘extraterrestrial’ vantage point – with a defamiliarising ‘outsider’s eyes’ on political, cultural, philosophical structures and divisions, and possible connections.

One of the best known of these works is ‘Project no. 10: Project to Extend the Great Wall of China by 10,000 metres’ (1993), in which the detonation of 10 kms of gunpowder and fuses at dusk at the Western extremity of the Great Wall in the Gobi Desert produced ‘a wall of fire and light running through the empty desert’ (Cai 2000: 140) – remember the Great Wall of China is supposedly the only man-made structure visible from the moon.

Another is ‘Project no. 26: The Century with Mushroom Clouds’ (1996), a photographic work in which small mushroom-clouds were released from hand-held gunpowder devices at the Nevada nuclear test site, at the location of Robert Smithson’s Spiral Jetty in Salt Lake, Utah (constructed at the same time as nuclear tests were being conducted relatively nearby), and beside Manhattan.

At the same time Cai has documented his projects, and created autonomous, small-scale work of enormous subtlety and fragility, through his ‘gunpowder drawings’: intricate constellations of only partially controlled scorch-marks on Chinese paper produced by placing and firing gunpowder.

While many of the ‘Projects for Extraterrestrials’ have been materially actualised, a number of the bigger-scale works remain ‘unfinished’ or virtual as propositions, scores, like Yoko Ono’s instructional pieces (and Cai cites the unfinished and unfinishable nature of Walter de Maria’s monumental Land Art work, The Lightning Field, as a core stimulus: a space of potentiality for interconnection) .

For example, ‘Project no. 15: Milky Way Drawing’, proposes a radical displacement of perspective and scale: ‘At the bottom of the Grand Canyon, 10,000 fireworks are detonated simultaneously with an audience viewing the scene from above, like extraterrestrials viewing the earth from space. The Grand Canyon is transformed into a kind of Milky Way’ (ibid: 142).

‘Project for Extraterrestrials no. 6: Bigfoot’s Footprints’ imagines a border zone being traversed by a vast, anomalous creature from ‘elsewhere’, the performance comprising the traces of its invisible, explosive, deterritorialising passage:

‘200 Bigfoot footprints will be made by pouring paper pulp into a 2-metre long footprint-shaped mould. Gunpowder will be laid out in these footprints, which will be placed on the border between two countries for a distance of 2,000 metres and connected by gunpowder fuses. With a 20-second series of explosions, the footfalls of Bigfoot will stomp over the border and disappear into the beyond […] Obtaining concurrent visas for the two countries where the project will be executed will be an integral part of the performance’ (ibid: 96).