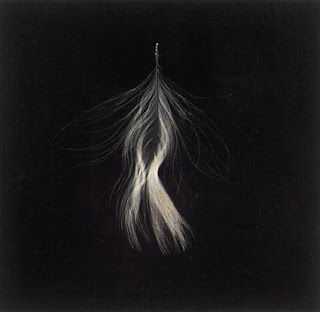 Almost all of British artist Cornelia Parker’s work might be considered through the lenses of ‘sky’ in the ways I am struggling to focus them in related texts here:

- processes of flux and transformation, the generative displacements of dérive and détournement;
- connectivity, becoming, unfinishedness in an expanded field of practices;
- the everyday as molecular, dynamic and nomadising rather than molar, monumental or static;
- a dramaturgy of emergence, ellipsis and dissolution, of flying and falling;
- the ‘fall-out’ of objects and their ‘negatives’ or shadows, and the invitation to read indexical traces of an absent action and to project meanings;
- the repeated return to practices of release in relation to the received, the naturalised, the inert, the fixed – like weather, sometimes combative, explosive, sometimes a protracted, gradual opening, a making porous;
- the triggering and unfolding of a multiplicity of associations from everyday concrete materials (and there is a clear link here with Bachelard’s writings on ‘material imagination’);
- and a critical play in the reciprocal relations and inter-ferences between micro and macro, between material change and ideational shifts, between history, memory, desire, belief and fiction – to borrow the title of one of Parker’s best known works, an engagement with ‘the maybe’ …

I think of her photographs of the sky above the Imperial War Museum in London, using the camera of Hoess, the commandant of Auschwitz, part of a series called ‘Avoided Object’. 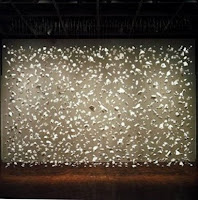 Her suspensions, exploded views of ‘cartoon deaths’ of the domestic and the everyday. ‘Cold Dark Matter’: the explosion of a garden shed. ‘Neither From nor Towards’: beachcombed and sea-worn bricks from the fall of a house over the white cliffs of Dover. ‘Mass: Colder Darker Matter’: the charcoal remains of a church struck by lightning. ‘The Edge of England’: lumps of chalk that have fallen from Beachy Head on the south coast of England. ‘The Slipper that Defied Gravity’: a photograph of a slipper that flew through the air in the Enfield poltergeist case in 1977-8.

I think of ‘Wedding Ring Drawing’: 2 gold wedding rings melted down and extruded to form a single loop of fragile, twisted gold thread ‘the circumference of a living room’, displayed with its coils enclosed like a lock of hair. I think of ‘Exhaled Blanket’: dust, fibres and a feather from Freud’s couch, trapped in a glass slide then ‘projected’.

Then I think of Parker’s meteorite series: ‘Shirt burnt by a meteorite’ - a man’s white shirt on a coathanger, with a scorch mark from a heated fragment of meteorite. ‘Hat burnt by a meteorite’. ‘Meteorite lands on St Paul’s Cathedral’: a suggestion of divine retribution through a scorched map, the meteorite’s scale massively amplified by its absence and trace. ‘Meteorite lands in the middle of nowhere’, the comic tabloid title of a series of scorchings of American 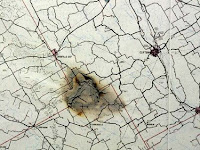 I think of her manufacture of meteorite showers by placing fragments of iron meteorites in fireworks let off in Birmingham above a major public building, the Bullring – so that parts of a meteorite that originally fell in Natan, China, in 1516, were returned to the sky 484 years later, to fall this time over the middle of England.

Most recently, Parker has been trying to collaborate with NASA on returning a meteorite back into space: inter-ference in the received mythology and metaphors and their trajectories - a reversal of gravity, and in this case the disappearance of the object altogether.

For further information on Cornelia Parker's work, via the Frith Street Gallery website, see here
Posted by david williams at 19:23