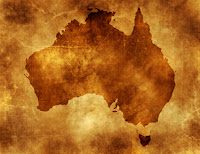 A long day of meetings during which, at times, inevitably my attention drifted. Exhaustion rather than boredom took me elsew/here, into the refuge of daydream. At one point, desert memories unfolded in the overcast Surrey afternoon - rather different 'meetings' - in particular, during one hot afternoon in February 1985, driving yee-haa on an ochre dirt road north of Coober Pedy on the way towards Alice Springs, kicking up billowing clouds of dust. Then a blow-out, skid, judder to a halt, engine cut, sudden silence: the second puncture of the journey, no more spare tires. Oh shit. Within half an hour or so, P hitches a ride with a passing truck; R and I sit in the car on the side of the track with all of the doors open, seats angled back, shades not quite up to the glare off the bonnet. It is unbelievably hot and still. Not even a fly. 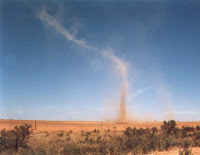 After a while, off to one side we watch a willy willy move langorously across the desert scrub, then wind its way towards us: a dust devil tilting and flexing like a tree in light wind, a spindly beige Giacometti figure leaning slowly one way and then the other. It is beautiful, and oddly funny; and we are hypnotised by it, transfixed - not even moving when it becomes apparent that it is heading straight at us. I am struck by the fact that this particulate whirlpool is revolving anti-clockwise. With a sudden roar and sand-blast sting, it passes right through the centre of the car, in through one door, out the other - right through us - whip-snap-ripping clothing and plastic bags and a hissing newspaper and a map and my hat, which fly up and out in a vortex of grit and dust like a great co(s)mic spin dryer before being deposited with apparent care over bushes and sand and road in a wide arc of perfectly spaced debris. The dust settles. Without a word we sit in the car covered in a fine layer of crystalline red, astonished, watching this tiny tornado wander off and finally, mysteriously, dematerialise.

In the rear view mirror, way in the distance, I see the rippled dust cloud of an approaching vehicle. We get out to watch its approach, shaking the sand out of our shorts and hair. Then more wide-eyed astonishment as a startling electric pink Holden ute flares into view: a grinning aboriginal driver with his foot flat down on the accelerator, two boys with him on the front seat, a group of women and kids standing on the flatbed, riding it like pony trick riders or surfers. We wave excitedly. They slow for a moment as they pass us, shouting, waving, laughing fit to bust a gut. Clearly we are the funniest thing they've seen for quite a while. Then they too disappear in a fleeting conjuror's fog, like a glorious rose space ship trailing clouds of glory, and the air is full of dancing ochre ...