(Calexico, ‘Quattro’)
‘We take a handful of sand from the endless landscape of awareness around us and call that handful of sand the world’ (Robert M Pirsig, Zen and the art of motorcycle maintenance, New York: Bantam, 1981, p, 6)

"American cars invariably carry the names of animals, or aggression and, if possible, a combination of the two: Impala, Thunderbird, Stingray, Mustang, Firebird, Charger, Corvette. In Albuquerque I hire a beast, a powder-blue Ford Mustang, and slipping a cassette into the stereo drive out along the interstate into the New Mexico desert.

The desert seduces us with the idea that we can start out over again, begin from zero: a myth dear to the hygienic rationality of pure reason and not completely absent from the demonic aestheticism of Nietzschean thought. But it can also suggest the idea of the infinite, the infinite language of Jewish thinking where, unlike the rational finality of Greek logos, we are always dealing with the question of what will be: an infinite future that conceals its origins, where the inscription of sense never concludes; for writing “is not a mirror. To write is to confront an unknown face’ (Edmond Jabès).

In the end we recognize that there is no possibility of going back, of starting over again. All we can do is confront ourselves and our histories. In the clear light of the desert, where our actions are overexposed, where, among the bits and pieces of our existence, time and space dissolve into one another and the wind blowing up from the past uncovers patterns in the deposits of our lives, we find ourselves in a landscape where there is no interpretation seemingly powerful enough to present itself as the unique truth.

The metaphor of the desert – a privileged topology for the nomadic sentiments of modern thought – can also become the place where we get lost, where our existence is swallowed up and cancelled. For the moment, the only truth on which we can rely is the immediate contact between the asphalt and the wheels of our car as we move between towns, motels, TV screens and billboards, elaborating local “maps that matter”, travelling down the provisional road we construct between what has already occurred and the possible …" 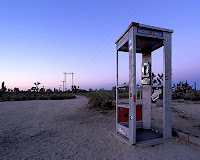 '"In the Mojave Desert, on the border of Nevada and California stands a phone booth. The glass is shattered and the frame has six bullet holes". Each day, there are over one hundred phone calls from every single continent, most often wrong numbers ... "Over the past few years, the aluminum phone booth, which is owned by Pacific Bell, has become the great switchboard of the world".

It is the focalisation point of the multiple solitude of the invisible community inhabiting the limbs of virtual space. Sometimes, as if by miracle, someone answers: "I am here", and the unknown caller replies: "I'm glad you're there, that you answered".

For driving music, see here: a video of Quattro by Tucson residents Calexico

For an earlier post about driving to work elsew/here, through the deserts of West London, see here
Posted by david williams at 20:43