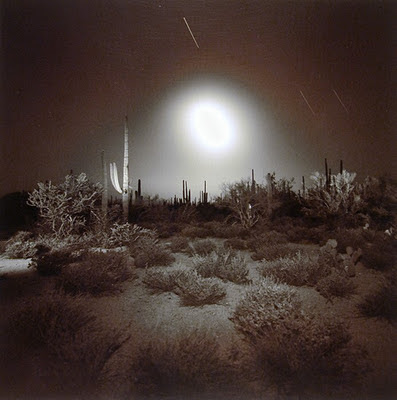 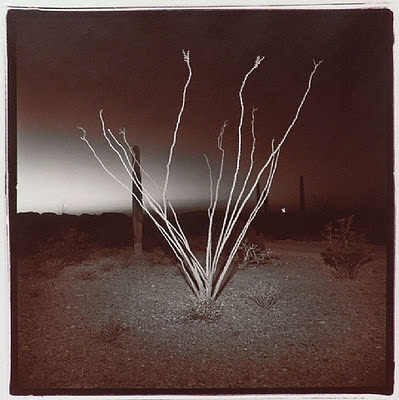 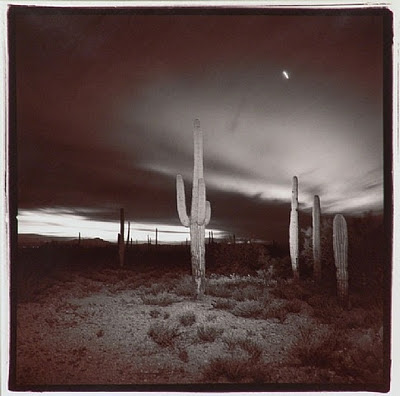 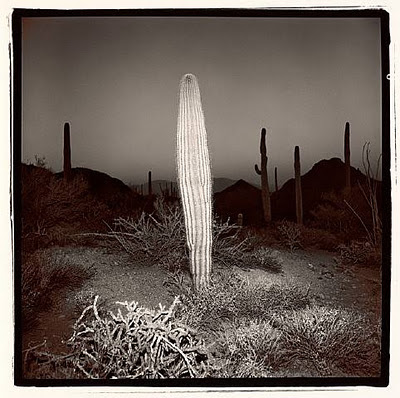 'Whatever else a photograph may be about, it is always about time' (Richard Misrach)

John Paul Caponigro: There was one thing that you said that I found very poetic. You said, when we were talking about photographing at night, "It just lead me to it. I learned that there’s a new language of working photographically at night; I just fell in love with the language." The notion of a language of night is beautiful. Tell me more about it.

Robert Misrach: Well, thanks very much. I can only go back to when I worked at night, earlier in my career, very early. I found it really liberating just to be able to work at night because there hadn’t been that much done in the history of photography. You know Brassai had worked at night, and there’s been individual photographs done at night, but there’s just so many other things photographed so thoroughly, it was hard to get away from that. It’s a trap in a way. Early on, working at night, there were so many things I didn’t know. Mistakes I made would lead to understanding new things. I guess the language evolved out of that ...

JPC: It struck me that photographing the desert and photographing the night have similarities, both seem like spaces that when first approached can seem empty and yet when you spend time with them you realize how full they are.

RM: Right, that’s very good. I was working exclusively at night and it’s only recently that I’ve come back to working at night again. But, as part of the Cantos, the way I’m approaching it now is conceptually much different.

RM: What’s different now is that I’ve become interested, in the last couple Cantos, with language and the way it shapes the way we see things. I’m working on a book right now. There’s a series of skies where I’ll pick a place on a map, like a Rand McNally map, and go to that place and photograph the sky. What’s in the photograph is not clouds, there’s no horizon line. There’s nothing in there. It’s really atmosphere, light. My idea was that the photographs become a rorschachs. What gives it its conceptual meaning is the name of the place. Each of the places is keyed by where I took it.

The night skies is a follow up on that in what I call the series 'Heavenly Bodies'. What I’m implying is the way that the night skies, the stars and the planets, have been named, is actually very Eurocentric. It’s based on Arabic language and Greek naming and mythology. All these different things that have been imposed on the American Southwest. Even though on one hand it’s sort of innocent, just a classification system, a naming system, it actually has a lot of bearing on how we understand ideas, sort of imperialist ideas about how one culture can lay its system over another – again relatively innocently but actually having a huge impact. Along with the skies which are based on place names, the Heavenly Bodies are based on constellation, star and planet names. What I’m doing is still looks very much like night photographs of the sky, it’s pretty straight forward in that sense. And yet, now with foregrounding the names and the language we use to describe those, at least the way Eurocentric culture does, it adds another element to the Cantos.

What I have done with the Desert Cantos is that each has a different strategy or approach to making images. Sometimes they’re very traditional. Others give you different ways to think about the overall picture, which for me has been the desert for these twenty years.

JPC: I’m looking at Crimes and Splendors, it looks like there were eighteen Cantos at the time of publication. (In numerical order – 'The Terrain', 'The Event I', 'The Flood', 'The Fires', 'The War (Bravo 20)', 'The Pit', 'Desert Seas', 'The Event II', 'The Secret', 'The Test Site', 'The Playboys', 'Clouds (Non-Equivalents)', 'The Inhabitants', 'The Visitors', 'The Salt Flats', 'The Paintings', 'Deserts', 'Skies', 'Las Vegas' and several 'Prologues'). Are there any other themes that you’ve found since the publication of this book?

RM: Well at the time of the book there were 18 plus what I call the metaprologue. Since then there have been a number of new Cantos; the 'Heavenly Bodies' for instance is the 21st Canto. And I’ve been doing the 22nd Canto – 'Night Clouds'. The 19th Canto is 'Las Vegas'. The 19th and 20th I’m still working on and I haven’t published any of those yet. The 21st and 22nd I’ve actually been publishing recently and will be doing a book on just those.

JPC: Your work seems multi-perspectival, it’s almost as if a cubist got a hold of the theme rather the form. And I wondered if you felt that has a scattering influence.

RM: I think that’s a really, really good analogy. One of the things that was really influential early on was Ezra Pound’s Cantos, one poem he worked on for 50 years. It’s epic. I had a great deal of difficulty understanding it. One of the problems was you’d be reading along in English and he would move to a Chinese ideogram or French--he actually used seven different languages in a given poem. And for somebody who’s not fluent in different languages it has the impact of rupturing your way of understanding something. It was very purposeful on his part to put these obstacles of language in there so that you become conscious of the whole system. You don’t get a neat narrative or a neat poem. Once you run into these obstacles of language you have to stop and think about other things. So, for me, in putting The Playboys or The Paintings or these language things in with these more conventional landscapes they inform each other. It does scatter, it does rupture, the way cubist paintings would. Each gives you a different way to approach something and sheds light on everything else.

JPC: Right. In a sense, less authoritarian and perhaps a little more true to our experience of life, which these days is none too cohesive.

RM: Our experience with knowledge, the way we know things, is not that neat. It doesn’t fit into a grand narrative, the way we’ve been taught to read. Things just don’t work that way any more. [...]

JPC: I find the desert fascinating. It’s a very fragile environment. It also points to our fragility. We’re codependent with the land and when the land is so fragile we too are fragile. Many people see the desert as a place of death. When I first moved from Connecticut to New Mexico it was a pretty barren place to me. But I learned to walk out there and instinctively avoid the cactus, look for the lizards, watch the night hawks. You become accustomed to a different rhythm.

RM: Yeah. When I was kid growing up the desert horrified me. I used to go skiing and we’d drive through the desert. You don’t want the car to break down. You don’t want to stop. You don’t want to get out. You don’t want to do anything. Once you fall in love with it, that’s it. The light, the space, the solitude, the silence. Oh my god. It’s a really powerful place to be. You’re with yourself. But the problem is because people characterize the desert as a waste land that’s why military corporations like to dump their toxics out there, because they consider a place like Nevada a "national sacrifice area." Because it’s a waste land. It’s ugly. It’s barren. And yet it is a remarkable place.

Extracts from an interview with Richard Misrach by John Paul Caponigro, first published in View Camera magazine, September-October 1998; for an online version of the full interview, see here

For an earlier post related to night in England ('nightfall'), see here
Posted by david williams at 07:42