'Between the earth and that sky I felt erased, blotted out' (Willa Cather)

'Nobody knew what to call it. It was not a rain cloud. Nor was it a cloud holding ice pellets. It was not a twister. It was thick like coarse animal hair; it was alive. People close to it described a feeling of being in a blizzard - a black blizzard, they called it - with an edge like steel wool ... 'Did you see the color of that monster? Black as the inside of a dog' ... 'The earth is on the move'. 'Why?' 'Look what they done to the grass. Look at the land: wrong side up' ...

The rains disappeared - not just for a season but for years on end. With no sod to hold the earth in place, the soil calcified and started to blow. Dust clouds boiled up, ten thousand feet or ore in the sky, and rolled like moving mountains - a force of their own. When the dust fell, it penetrated everything: hair, nose, throat, kitchen, bedroom, well. A scoop shovel was needed just to clean the house in the morning. The eeriest thing was the darkness. People tied themselves to ropes before going to a barn just a few hundred feet away, like a walk in space, tethered to the life support centre. Chickens roosted in mid-afternoon ... 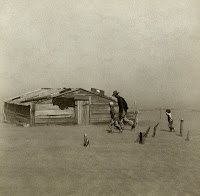 Many in the East did not believe the initial accounts of predatory dust until a storm in May 1934 carried the wind blown shards of the Great Plains over much of the nation. In Chicago, twelve million tons of dust fell. New York, Washington, even ships at sea, three hundred miles off the Atlantic coast - were blanketed in brown.

Cattle went blind and suffocated. When farmers cut them open, they found stomachs stuffed with fine sand. Horses ran madly against the storms. Children coughed and gagged, dying of something the doctors called "dust pneumonia". In desperation, some families gave away their children. The instinctive act of hugging a loved one or shaking someone's hand could knock two people down, for the static electricity from the dusters was so strong ...

On the skin, the dust was like a nail file, a grit strong enough to hurt. People rubbed Vaseline in their nostrils as a filter. The Red Cross handed out respiratory masks to schools. Families put wet towels beneath their doors and covered their windows with bed sheets, fresh-dampened nightly. The sheets turned a muddy brown ...

A Sunday in mid-April 1935 dawned quiet, windless, and bright. In the afternoon, the sky went purple - as if it were sick - and the temperature plunged. People looked northwest and saw a ragged-topped formation on the move, covering the horizon. The air crackled with electricity. Snap. Snap. Snap. Birds screeched and dashed for cover. As the black wall approached, car radios clicked off, overwhelmed by the static. Ignitions shorted out. Waves of sand, like ocean water rising over a ship's prow, swept over roads. Cars went into ditches. A train derailed ...

'It was like I was caught in a whirlpool. All of a sudden it got completely dark. I couldn't see a thing'.

That was Black Sunday, April 14 1935, day of the worst duster of them all. The storm carried twice as much dirt as was dug out of the earth to create the Panama Canal. The canal took seven years to dig; the storm lasted a single afternoon. More than 300,000 tons of Great Plains topsoil was airborne that day ...

At its peak, the Dust Bowl covered one hundred million acres ... '

For driving music on this day of the summer solstice, see here: Gillian Welch & David Rawlings, 'April the 14th (Part 1)' - a song that weaves together disparate events that happened on 14 April, 'ruination day': the assassination of Lincoln, the sinking of the Titanic, Black Sunday
Posted by david williams at 10:42