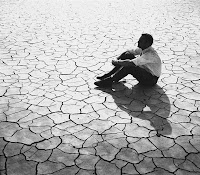 Miss Atomic: "Good evening, pagans, Vegans, insomniacs, gorgeous lizards, hospitality peddlers, sweethearts, assassins. Grab your drink, baby, we're gonna be here for a while. We are desert people. We make our homes in impossibility. We hallucinate regularly. We might have magic lamps, or we may be the type, myself included, to play the genies ..." (The Team, Mission Drift, London: Oberon Books, 2013)
______________________

Over three weeks in the summer of 2013, I uploaded daily posts here as a remote contributor to SHUTTLE: mobile desert performance, at the invitation of Mick Douglas, and as part of his Performing Mobilities Network. For the project website, with further details of those involved and a map of the itinerary – an anti-clockwise loop from Tucson to Tucson, via Utah and California - see here. Other contexts are outlined briefly below.

At this stage I didn’t know what of this would emerge in coming days, in posts uploaded on the hoof in the gaps between my ongoing work commitments here - and quite what it would amount to. Hopefully traces of a virtual, associational journey in parallel, a slight re-directing of the geometry of attention that allows for passages between the close-at-hand and the faraway, the actual and the possible …

Maybe think of them as a bunch of balloons released in to the air. Although most of them might well drift off forever into the sky, the odd one might just be held on to and bob along with you for a while.

Thanks again for sharing the SHUTTLE details, and for your kind invitation. 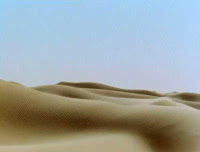 For a virtual contribution/ participation, I'd like to propose something along the following lines: on each of the 21 days of the Shuttle project, 17 June – 7 July, I will post something online – some resources, perspectives, materials related in particular to deserts. These may include propositions or questions, found texts and my own writing, images, sounds/songs, reconstructions, etc. So – traces of a parallel 3-week journey of accompaniment during which my attention here, for a section of each day, will be given over to your group, the route, imaginings of landscapes there, traces of environments here. Cumulatively, therefore, an archive of 21 posts, comprising small invitations and gifts from afar that hope to encourage the possibility of further conceptual and imaginal links, leaks, flows. Associational ripples, modest frictions, 'winds' from elsew/here.

Daily materials would be posted on my blog site skywritings by midnight UK time, each one entitled SHUTTLE and numbered accordingly (day 1 etc.). Along the way, Sue Palmer may contribute some materials about desert flora.

A collection of international artists, designers, performance makers and researchers journey through the deserts of the American south-west performing an exploration of the aesthetic, political, cultural and environmental resonances of desert ecologies. As a temporary travelling community interested in movement, environment, and performance, the project crew intend to generate new creative practices and works that shuttle between registers of knowing and unknowing by exploring performances of mobility.

In a journey through seminal land art works, ancient settlements, desert conditions, and transit spaces, SHUTTLE will perform daily processes of creating ephemeral conditions and generating encounters. An initial landing event and a subsequent returns event in Tucson, Arizona, welcome public interaction – including collecting offerings from Tucson residents for SHUTTLE to carry forth. SHUTTLE presents an interval at the Performance Studies International ‘Now Then’ Conference (PSi 19) at Stanford University in Palo Alto, and will inform the development of PSi21 ‘Fluid States’ globally distributed events planned for 2015, in particular the Australian project ‘Movement Forms of an Island Continent’.

Grzegorz Brzozowski is a director and script writer working on a PhD at University of Warsaw researching modern festival communities through the lens of anthropology of performance and sociology of religion.

Mick Douglas is an artist making socially-engaged art and performance, senior lecturer at RMIT University, Melbourne, and initiator of journey-based projects that explore the performance of mobilities.

Fiona Harrisson is a landscape architect, horticulturist and senior lecturer at RMIT University, Melbourne, exploring the role that citizens’ relation to landscape plays in the crisis of our times.

Didier Morelli is an interdisciplinary performer and artist investigating the body as a site for change, exchange, identity and belonging. He is an MFA student at Simon Fraser University in Vancouver.

James Oliver is an artist-researcher and Graduate Research Coordinator at the Centre for Cultural Partnerships of Melbourne University developing performative methodologies of practice-as-research.

Sam Trubridge is a performance designer, artist, scholar and artistic director with New Zealand company The Playground who is currently researching nomadic philosophies and practices.

Unknown Persons may be given passage during the course of SHUTTLE.

Beth Weinstein is an architect and Associate Professor at the University of Arizona working between architectural and choreographic practices, and research of American Southwest land art and water issues.
_________________________

SHUTTLE remote crew (artists on board in other locations)

‘The Sustained Doodling Project’: researching the challenges of art in space through a creative collaboration between SHUTTLE and Melbourne artist Annalea Beattie. 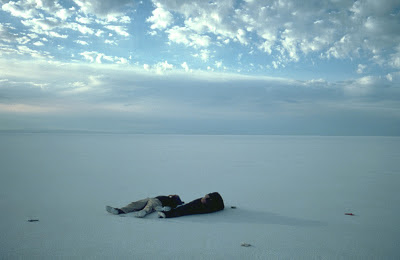 Photos, from the top: David Lean during the filming of Lawrence of Arabia (1962); still from Werner Herzog's Fata Morgana (1971); still from Gus Van Sant's Gerry (2002). 'The Desert of Culture' cartoon by Biff (The Guardian)