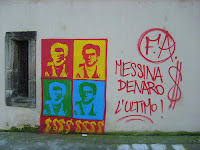 The following text is from a recent Italian news article, as 'translated' by Google, about purported collusion between Raffaele Lombardo, the current President of the region of Sicily, and the mafia. The former Christian Democrat and MEP was elected in 2008 with over 68% of regional votes. He took office after President Salvatore Cuffaro (nicknamed Vasa Vasa, 'Kiss Kiss'), another former Christian Democrat, currently serving a 7-year sentence for aiding and abetting Cosa Nostra.

"I did not expect this news-went-but certainly, if someone was waiting for" and added: "On this story I will write a book." Prosecutors say there were contacts between Lombardo and Cosa Nostra mafia. The existence of direct relationships between the boss of Calatagirone, Rosario Di Dio, and Raffaele Lombardo emerge from wiretaps and statements of cooperating witnesses. God refers to an accomplice who Lombardo time ago he would go to him. "At half past one at night came, and was two and a half hours from me here. From one and a half to four in the morning. He ate seven cigarettes." He added that Lombardo had been received through your farmer "three bags full of facsimile" inviting him to engage in elections. 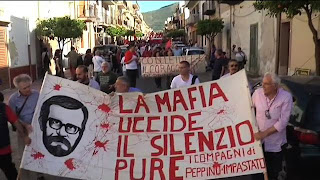 Photograph at top: graffiti on the back wall of Palermo's cathedral, 2008
Photo at bottom: from events in memory of Peppino Impastato in Cinisi, May 2012
Posted by david williams at 21:32