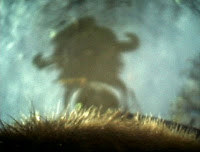 'To look at [animals in dreams] from an underworld perspective means to regard them as carriers of soul, perhaps totem carriers of our own free soul or death soul, there to help us see in the dark. To find out who they are and what they are doing there in the dream, we must first of all watch the image and pay less attention to our own reactions to it' (James Hillman).

My first class in a new job in a new university on the edges of the city. Six hours in a studio exploring the topic of animals. We talk of animal encounters, fears, dreams. I tell the students about Joseph Beuys and the coyote, Marcus Coates' Dawn Chorus, Val Plumwood's crocodile attack in Australia, James Hillman's Dream Animals. They talk about cats and bugs and worms and arachnophobia, dog attacks, collisions with deers on the roads.

We look at some of Sam Easterson's short films about animal locomotion, in which he attaches tiny video cameras to the heads of wolves, bison, armadillos, sheep etc. We watch an episode of Creature Comforts about the circus, and our discussion hovers around the pros and cons of anthropomorphism.

Later, after a warm-up and some impromptu collective barking, I ask the students to work in small groups to make an animal appear in the studio.

During a short break I drink a coffee and smoke on a bench amongst trees at the back of the theatre building, about 40 metres from the thundering A road into central London. As I sit there immobile, thinking about the class, a young male deer approaches, limping badly. With its brown coat mottled with white spots, and its short antlers, it looks like an adolescent fallow buck - dama dama.

On its left rear haunch it has the grey scar tissue of a serious wound, a car accident or attack of some sort. It doesn't see me, and hobbles to within 5 or 6 metres, its left side towards me. It sniffs the air, and lowers its head to eat the grass. I can hear it chewing evenly, like a pony. Ruminant. It has extraordinarily beautiful eyes - much older than its body somehow - and a velvet top lip beneath its moist black nose.

Two terriers in a neighbouring garden have heard something and bark incessantly behind the fence; the deer ignores them completely, it's been here before and knows they can't get out.

With wide eyes and shallow breath I watch it closely, wanting its peacefulness in this rural/urban context to continue uninterrupted by fear. It munches the grass for a while, shakes its head, then turns its head to look me in the eye for a full 10 seconds without seeming to see me for anything like what I am, before walking off towards the trees, its head bobbing up and down as it limps. Then it's gone, and the traffic moves on relentlessly.

I go back into the studio wondering quite how we have conjured up this visitation, and what else the students will bring into appearance.

***
Some hours later, mid evening in a suburban London street. I sit in my car making a phone call, and a fox ambles up the road, thick tail horizontal, and stops beside my car. It sits in the road, scratches, watches, its ears focused on a point up ahead like antennae. It doesn't see me at all. When it stands up to move off up the road, I see that it has a limp in its right rear leg. It disappears silently, as discreet as a cat, a shadow blending into the shadows in someone's front garden.

Postscript - two weeks later: Another week, another class. After watching a longish section of Werner Herzog's Grizzly Man, we pause for a break after Herzog has listened to the sounds of Timothy Treadwell and his girlfriend being killed by the bear.

Outside the door of the studio, some of the students find a dying pigeon. They come and tell me, and I go outside with them. A pigeon on the stones of the courtyard, a couple of yards from the door, with the back of its head severely and inexplicably damaged - shot away, or sliced somehow, or perhaps torn open by a bird of prey. It is silent and barely moving, thick red blood stiffening on its feathers. It's close to death, but we don't know what to do. T and I stand there shocked but unable to act: 'I can't do this', T says, 'I'm too much of a pussy'.

J quietly says he can 'dispatch' it, he knows how to do it. I pick it up in a ball of paper, and take it to a concrete kerb by a skip. J places it on the lip of the kerb, and calmly but decisively steps on its head. Crushes it. The body spasms. J says it's normal, the death throes, it's what they always do. He places the body in the skip, and wipes his shoe on the tarmac.


Photo at top: still from a Sam Easterson video - a bison's reflection of itself in water as it drinks
Posted by david williams at 20:10