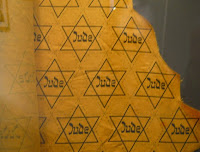 I spent most of yesterday at the Arnolfini Gallery in Bristol, watching a screening of Claude Lanzmann's astonishing film Shoah (1985). Dan Gretton had invited me to help him introduce the film, with Alan Boldon. It was being shown as part of Platform's 2-month long residency at the Arnolfini, C Words: carbon, climate, capital, culture, and in conjunction with Dan’s performance lecture next week (and forthcoming book), Desk Killer.

11 years in the making, and 9 1/2 hours long, Shoah is a profoundly unsettling and challenging document, a kind of limit text that seeks to confront and engage with the unrepresentable. I had seen it before over 3 days in Melbourne in the mid-1990s, as part of the preparation for training as an interviewer for the Shoah Foundation's international oral history project, a coordinated gathering of testimonies from survivors from around the world (now archived in Israel and the USA). This first viewing was interspersed with lengthy discussions with survivors, members of the Polish Jewish community in Melbourne; these remarkable, buoyantly alive women had been children in Auschwitz.

Yesterday's second viewing in Bristol took place over a single day, with 3 short breaks: starting at 2.00 p.m., finishing at about 12.45 the following morning. Inevitably, an immersive and gruelling experience, so much of its detail forgotten and now reawakened. Afterwards we lurched out into the night; on the quays on the other side of the water, clubs and bars pumping. And I remembered those women in Melbourne: the fire and compassion in their eyes, the palpable life-force they exuded, their astonishing clarity, generosity and gentleness.

First, a quotation from a 1985 interview with Claude Lanzmann, published in Cahiers du Cinéma:

So, a film created under the sign of, and in the face of, a double impossibility – the absence and unnameability generated by what Maurice Blanchot called ‘the utter-burn of History’. As the editors of Cahiers du Cinéma suggest, ‘the film is made entirely of words & gestures around a kind of blind spot that is the absence of the images it speaks about’. Lanzmann insists it is a ‘work of art’: an ‘originary event’ constructed with ‘traces of traces’.

A note on the title: ‘Shoah’ is a recurrent term in the Hebrew Bible, used to refer to the ravages of natural disasters: earthquakes, floods, and so on ('acts of God'). By mid-1940s, it had become a central term in pre-state (and later Israeli) public discourse about these catastrophic events for the European Jewish diaspora. By extension, it means ‘catastrophe’, ‘destruction’, ‘annihilation’. Initially it was chosen by Lanzmann not knowing Hebrew, not understanding its full meanings: he described it as ‘a brief opaque utterance, an impenetrable word, as unsmashable as an atomic nucleus … another way of not naming it’ (the events and the film).

Compare the term 'Shoah' with the theological implications of the term ‘Holocaust’, in relation to which Lanzmann was dismissive: derived from the Septuagint, the Greek version of the Hebrew Bible, 'Holocaust' means ‘burnt offering’, and suggests sacrificial offerings, a ritual inevitability.

A second quotation from Lanzmann: ‘A film on the Holocaust has to set out from the principle of the rejection of memory, the refusal to commemorate. The worst moral and artistic crime that can be committed in producing a work dedicated to the Holocaust is to consider the Holocaust as past. Either the Holocaust is a legend or it is present; in no case is it a memory’.

Lanzmann proposes a particular model of memory in his film: through micro-histories rooted in precise facts – where? what? when? who? how? to whom? (not why?) - and places. For this is a profoundly topographical film, with its insistent return to the scenes of these crimes, which Lanzmann, with reference to Pierre Nora, calls ‘non-sites of memory’: Treblinka, Belzec, Sobibor, Auschwitz-Birkenau.

Lanzmann believed that the brutality and violence of these facts in these places might have been weakened by the simplistically causal/linear narratives constructed by many historians. As one writer on the film, Leon Wieseltier, puts it, Lanzmann seems to have wanted to spare his witnesses ‘from the perfections of narrative’. And in his film the disjunctive plurality and weave of the witnesses' voicings, speakings, are more important and productive than any simplistic, seductive, reductive narrative arc.

One of Lanzmann's core concerns was to restore a sense of the immediacy of the Shoah for contemporary viewers, to make the past present, to make it 'take (a) place' with its horrors, complexities, ironies uninsulated: in other words, to presence its un/imaginable absences vividly. For example, Jan Karski's account of the last days of the Warsaw Ghetto; or the Czech Filip Müller on the hellish predicament of those Jews coerced to work within the Sonderkommando units in the ‘undressing rooms’, gas chambers and crematoria of Auschwitz - Müller survived 5 liquidations of the Sonderkommando.

Those interviewed are often asked to re-experience situations rather than to narrate memories. Many of them play out their roles in the relevant or related sites; performed versions of what happened are re-staged to take place once again in the site of trauma, thereby reintroducing the past into the present. Simon Srebnik, for example, one of only 2 survivors from Chelmno, returns to the Polish village; or Abraham Bomba, former barber for women in the Treblinka gas chambers, cuts a man’s hair in a salon in Tel Aviv; or Henrik Gawkowski, the Polish train driver of transports to Treblinka, once again in an engine rolling up to the station sign for Treblinka.

This return/re-enactment is an ambiguous technique Werner Herzog has used repeatedly, in Little Dieter or Wings of Heaven, for example; it’s a kind of Brechtian technique of reconstructive theatricality, or perhaps a psychoanalytic revisiting of the site of trauma, an acting out as a way to reactivate and work through. At times in Herzog, as here in Lanzmann's film, the ethics of the director's coercive pursuit or insistence are troubling to say the least. In Lanzmann's film, the camera zooms unapologetically to extreme close-up when masks crack and unbridled painful emotion is exposed.

Notice also how the revisited spaces themselves are called to ‘testify’ through their absences. They are surveyed slowly to disclose what remains and what has disappeared, such attenuated images often accompanied by the voices of those who suffered there, voices that ‘excavate’ archaeologically (a metaphor Lanzmann uses). In these sequences there is a recurrent discrepancy or friction between deceptive ordinariness/tranquillity in the present and former horrors – often in a silence that registers a terrible silencing. This disjunction requires reconciling in the spectator/witness in the present. (Lanzmann’s initial title for the film was Site and Speech, which points to the radical economy of means employed in the film: just ‘places, voices, faces’ (Simone de Beauvoir) - although in the end Lanzmann abandoned this title as ‘too abstract’).

Lanzmann’s focus here is on the systematic transport and machinery (bureaucratic, administrative, logistical etc.) of the murder of millions of Jews from early 1942, in particular in the ‘Operation Reinhardt’ death-camps at Belzec, Sobibor, Treblinka, and then at Auschwitz-Birkenau. There is no attempt here to provide a ‘complete’ history, despite the thoroughly researched historical framework underlying the film (and Lanzmann's indebtedness to the historian Raul Hilberg, one of very few interviewees here not directly implicated).

Necessarily there are all sorts of omissions. For example, there's almost nothing here about Jewish resistance, nor how most of the interviewees escaped death, nor collaborations in deportations by Western European governments. Nothing at all about ‘Operation Barbarossa’ when nearly a million Jews were murdered by the German Einstazgruppen in Eastern Poland, the Ukraine and other western Soviet States.

Perhaps most conspicuously, the film contains no archival film clips or photographs of the camps, victims, survivors – a total absence of any direct historical images of the film's principal subject (surely very rare in documentary). Lanzmann, marked by Adorno’s misgivings about the recycling of such images, felt they were inadequate, misleading; he dismissed them as ‘images without imagination’, an unsavoury, even pornographic spectacle.

Lanzmann was very clear about what he viewed as the limits of representation. He believed this past could only be accessed and animated now through a requirement for a focused effort of listening, learning, engaging imaginatively from the particularities and partialities of the details of 1st hand accounts. He saw documentary mimesis/reproduction as a hindrance to this other kind of ‘re-membering’ (anamnesis) that he was after – and this is at the very centre of the film’s ethical dimension. Lanzmann proposes a highly structured meditation on or moral enquiry into this genocide, awakening in the imagination the lived physical/carnal experience of its very processes of destruction: the intricate machinery designed to render subjects into dehumanised objects, in what Franz Suchomel (the secretly filmed former SS Unterstürmfuhrer at Treblinka) calls the ‘industrial production-line of death’.

The structure of the film provides a dense network of first-hand experiences of and perspectives on these systems, and particular roles within them. No one talks about the ‘Holocaust’ as global abstraction. There is only the concrete lived (and partial) experiences of witnesses to one aspect. Cumulatively the film elaborates a mosaic of perspectives, presented non-chronologically. And ultimately cyclically – we end where we began: with the destruction of the Warsaw Ghetto after the uprising, as described by Simha Rottem, and the transports from the ghetto to Treblinka.

Through the film's complex architecture, Lanzmann was aiming at what he called ‘an incarnation, a resurrection’, with these fragments designed to make of ‘the whole process of the film … a philosophical one’. And ultimately a profoundly unsettling and demanding one for spectators, who are witnesses to those ‘bearing witness from inside the very burning of the witness’ (Shoshana Felman). The film’s structure and its length ask of us particular qualities of commitment, attention, listening, compassionate imagination and reflection, and the work of an integrative re-membering here now.