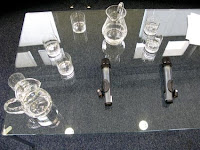 Just back from Warsaw, where I had been invited to give a presentation about being a dramaturg at a conference of practitioners and academics from Poland, Germany, Britain and elsewhere. Some lovely people, and the odd exquisite presentation, particularly one by the German dramaturg Dunje Funke about a sited project in Neukoln, Berlin - alongside quite a lot of the usual nose-down reading of the dense writerly thing that was never-meant-to-be-spoken-aloud, with the listener's predicament (as Gary Winters recently described his experience of another conference) like that of someone 'hitting the ground running, bang in the middle of someone else's research'. The sprinting simultaneous translators were impressively game, with only the occasional linguistic oddity: e.g. lengthy discussion of the celebrated 'herbal scene of Ophelia' in Hamlet. The opening session of the conference was rather disconcertingly entitled 'Dramaturg: man or fish' - as if those were the only two options.

On the way there, at Luton Airport, standing behind two young Polish women and their English friends in the check-in queue. The women were explaining why it was time to go home now, once and for all, enough's enough. After three years of really trying to make a go of it, it had become oh so clear that England was actually 'shit'. They were delighted to be leaving.

I didn't see much of Warsaw, most of my time there was spent either at the conference in the Goethe Institute, or walking to and from the hotel. Past the American Embassy, with huge concrete crash-barriers at its entrance, a lot of security. Past towering statues of earnest men in huge lead-like coats with impressively droopy moustaches, looking ponderous. Past an enormous Charles de Gaulle, stepping out in slightly dandy-ish fashion in his uniform. 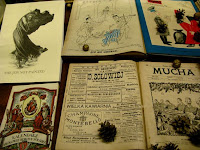 Past some very eccentric antiquarian bookshops, their window displays offering surreal conjunctions of materials that reminded me of images encountered during the Parisian drifts of Breton or Aragon. I spent one evening wandering around the 'old city': a reconstruction from old photographs and paintings of that section of the city that was utterly destroyed and levelled by retreating Germans and advancing Russians 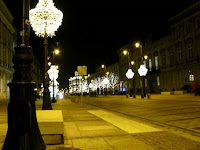 at the end of World War 2. A peculiar place: beautiful, in an uncanny and almost deserted way, the patina of its long pre-history erased, like an architect's scale model of the urban shapes that once housed memory with all traces of the embodied memories themselves cauterised in the utter-burn of history. A replica reinstated without the weathering of centuries of time and people.

Its theatrical artifice reminded me of a passage from Isabel Fonseca's Bury Me Standing: The Gypsies and their Journey (1996): 'The "Old Town" is a cobble-stoned reconstruction of Ye Olde Warsawe, an impeccable Baroque theme park completed in the 1970s. The sense of a stage set, perhaps again to be struck by terrible historical forces: this is the flavour of the unease one feels here, where the names of streets are still changing, and where, in the Ghetto, the foundations of buildings are cracking open. The rubble of the past is actually pressing through, and you stand there staring, as if waiting for a pair of trembling hands to emerge from a crevasse. Perhaps those who rebuilt the area, razed after the Uprising, didn't want to bury or sweep away the past. (Though not much fuss is made over survivor sensitivities: for example, Orbis, the state-owned travel agency, chose as its headquarters the very spot where the buses left the Ghetto for Treblinka)' (198-9).

*****
As part of my presentation about working as a dramaturg in contemporary performance, I referred to the ongoing collaboration with Lone Twin Theatre. I had asked Gregg & Gary beforehand if they could tell me what it is they thought I was, or could, or should be doing with them. In an email called 'job description' (7.1.2009) Gregg sent me the following, which I read in full at the conference:

David Williams has asked us for a job description. David has worked with Lone Twin Theatre as dramaturg since 2005. His request suggests that for the last 4 years David hasn’t totally understood what it is he’s been doing. Indeed had any of you the pleasure of witnessing David at ‘work’ you may have come to a similar conclusion. However the request has been made, and in the spirit that one is never too old to learn something new, David, here it is in 5 points:

1. As dramaturg to Lone Twin Theatre you will have spent some years in the company of Gregg Whelan and Gary Winters slowly earning their trust and respect. You will have extensive experience of their practice and have seen a great number of their performances. Although you hold said ‘practice’ and said ‘performances’ in high esteem, this won’t stop you entering the dressing room post-performance and asking in a quiet, unrushed, supportive tone: ‘what the fuck was that?’

2. You will have the ability to see things that aren’t there. After perhaps two hours of a group exercise in which for all involved very little has been achieved, save the need for a lie down, you will raise your head from your small black notepad and suggest in a quiet, unrushed, supportive tone: ‘it’s there, something is there, I can’t say what is, but it’s there, something is there’. You will remain unmoved when asked to ‘be quiet David, we’re trying to sleep’

3. You will believe, with all of your heart, in everything that happens in a room between eight people.

4. You will embark on a journey, taking on an idea, finding its form, its shape, what it is that’s funny about it and what it is that’s sad about it. You will care for it. You will know each part of it. You will be familiar with its texture, its type, its mode. You will know how it rests, how it plays and how it works. You will hold the idea in your head, in your hands, in your legs. You will ask, towards the end of the process in a quiet, unrushed, supportive tone: ‘perhaps this is the one I should be in? I really understand this one, I think I’m perfect for it, you know, I really feel this one, I could do this one’. You will be unmoved when asked to ‘be quiet David, we’re trying to sleep’

5. You will believe, with all of your heart, in everything that happens in a room between eight people.
Posted by david williams at 17:02