day draws near
another one
do what you can
(Czeslaw Milosz, 'On Angels')

For the first time in my life this week, at the age of 51, I built a snowman. A childhood spent in a hot country, where snow looked like a sort of Liberace-style decorative flourish used to adorn some films and postcards, means that snow still remains unfamiliar as an event and a material. Stacks of it outside, so now's my chance to explore it, I thought. Creative play en route to work: I work in an art college, for crissakes, so why not. Yes!

I had no idea how to construct the figure. It wasn't until afterwards that someone mentioned the cumulative snowball-rolling trick, one for the body, a smaller one for the head. So I rammed snow into a square bucket, tipped it out in 'bricks' and gradually built vertically, patting the sides to compact the snow into a rock-hard icey structure. When it had become an even spherical pillar a little over 5 foot high, I realised it had no suggestion of head; so I began to chisel eyes, nose, mouth, jawline carefully with my fingers. It was only then that I realised I'd constructed - to all intents & purposes - a huge ice cock with the outline of a face. Oh.

I was just smoothing off the edges, rubbing the surface of its sides to an even finish and thinking how I might transform cock into something a bit more humanoid in shape, when I realised the postman was behind me watching me with a worried expression. Okay, yes, it didn't look good: middle-aged man rubbing his hands up and down ice cock sculpture in his garden. Like some rather pathetic act of sympathetic magic, or an arcane Devon pagan ritual, perhaps an attempt to reignite my 'manly ardour'. I grinned and waved cheerily at the posty, aware of how unexpected this image must have looked from the outside; instantly I could see this scene from his perspective, and of course it made me laugh. Posty, eyes on stalks and more than a little perturbed, was not laughing; he had something of the look of Herbert Lom in the Peter Sellers Pink Panther films. After a few seconds of staring he dropped the mail on the doorstep and fled. Oh. Oh well.

Okay, all it needs now, I thought, is a little final decoration and the transformation will be complete. Two bits of gravel from the driveway for eyes, a black cap on the top, and a Torquay United scarf for a splash of colour, and to at least suggest the possibility of neck & shoulders where there were none. Perfect. Lovely job.

Oh no ... The face looks kind of like a square-jawed version of me. I've sculpted a self-portrait as half-man/half-cock. Blimey. I'm not sure that's quite what I had in mind. Or is my perception of 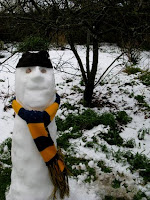 it just the fruit of my mind? Is it actually quite weird, or am I just thinking about this in a weird way? And do I care? Mmm ...

Anyway, after some further minor tinkering I convinced myself it looked sort of snowman-esque if still slightly anomalous. There it is: my first snow personage creature thing. Couple of photos, then off to work.

When I got home, large footprints through the snow led to what were by now the remains of the snowman. Body kicked over, trampled. The head, with scarf & cap, gone. I thought briefly about taking a cast of the foot prints, wondered if it had been an enraged Plymouth Argyle fan or a deranged postman - then set off to see if I could find the scarf & cap; I figured the assailant would have dumped them somewhere nearby. No sign of them in the street, in the bins etc., and nobody in the village centre in a yellow-and-blue scarf, so I headed home a little forlorn. Had what I had made provoked this? On the way past the public gents toilet, I paused for a moment, imagined various lurid scenarios, then went in. In the cubicle, jammed into the toilet bowl , was the head - scarf & cap intact. Head first. I pulled it out, and took it home - put the scarf & cap in the washing machine - and re-attached head and body. A little final tidying and tinkering, including an extending of the grin on the face and a reinsertion of eyes, and there it was again, only this time stripped bare, a little bit bent off-centre spinally, and a distinctly manic expression.

Images of the unhinged postman tearing off the head with a roar and running wild-eyed to the gents. I hoped whoever it was now calm, feet up, watching Noel Edmunds with eyes softened into a central-heating cuppa tea & jaffa cake glaze. 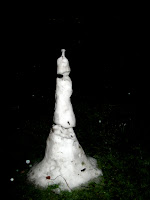 Overnight it rained heavily. At one point I went outside to look and the head had partially dissolved, leaving a luminous white stalagmite on the grass. It looked ancient and brilliant and mysterious.

By the next morning all that as left was a foot-high dome of ice, like a tiny ice-age burial mound.
Posted by david williams at 18:18