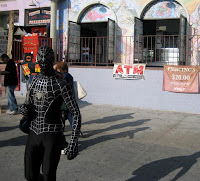 And time gets somewhat muddled here
But no matter, no matter
Here come the events all tumbling down
(Nick Cave, ‘The Witness Song’)

Breakfast in a Californian motel. At the self-service counters, an unfamiliar array of food including a metal trough of despondent-looking burgers, fried potatoes, a variety of bagels, cheese sauce from a machine that looks like the base of a vacuum cleaner, and a griddle for making waffles as big as a Frisbee next to a bowl of ‘raspberry syrup’. Never eat anything bigger than your head.

Tim pours himself a whopping glass of the waffle mixture thinking it’s some kind of lassi. 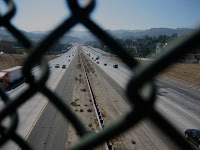 In today’s local paper, the Daily News, a story about the new ‘Civic Musical Road’, a quarter-mile stretch north of Los Angeles. Its asphalt is grooved to play Rossini’s ‘William Tell Overture’ when you drive along it in a Honda Civic at 55 mph, the local speed limit. It’s engineered precisely for the Civic’s wheel base and tires. No mention of what it sounds like when played by a big fuck-off SUV cruising at 80. Local residents aren’t impressed; at a distance, they say, the road produces a high-pitched rhythmed drone that keeps them awake at night, and that all in all it’s far from ‘civic’. Other ‘singing roads’ have been built in South Korea, Japan and Holland, I read. I wonder what songs they sing … 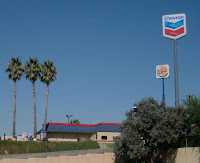 Elsewhere in the same paper, alongside a story entitled MEGACHURCHES EVOLVE WHILE CONTINUING TO GROW and an ad for a cemetery plot for sale in the Hollywood Hills (‘“Eternal Love” section, lot 5322, $3200’): “Heaven is no longer viewed as an exclusive place by many Americans, according to a new survey from Baylor University. When researchers polled US adults about who – and how many – will get into heaven, 54 percent of respondents said that at least half of average Americans will make it through the Pearly Gates. But 29 percent said they had no opinion about the fate of the average American, a figure that mirrored those who thought ‘half or more’ of non-religious people would make it into heaven”. 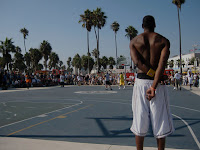 On the TV, Sarah Palin on the campaign trail wading brashly into an approximate pronunciation of the words Ahmedinejad and nookular; OJ’s trial in Las Vegas; mysterious stop-start ball games, and Ryder Cup golf; endless ads in which competing products are dissed in order to persuade ‘the average American’, ours is so much better than yours (this also seems to be the model for much of the political campaigning pre-election) … Meanwhile, always and everywhere, a wash of FM music radio. There’ll be no justice if the Eagles make it to Heaven. 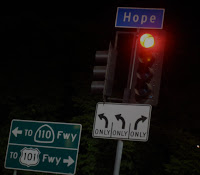 'All the silence of San Narciso - the calm surface of the motel pool, the contemplative contours of residential streets like rakings in the sand of a Japanese garden - had not allowed her to think as leisurely as this freeway madness' (Thomas Pynchon, The Crying of Lot 49)

Places pointed out to me by a South American cab driver as he drives down into LA from the hills - in one section there are seven lanes of freeway in both directions: - That’s the San Fernando valley, ‘the valley, as in valley girls. That’s where I live. It’s the 4X capital of the world’. - That’s where Arnie Scharzenegger fell off his Harley. (‘Didn’t even have a license, man. Dyou know what we call him? Asshole. Cos he can’t pronounce asshole’). - Over that way’s where Rodney King was beaten by the cops. - That’s the Hollywood Forever Cemetery (‘Busby Berkeley’). - That’s ‘the famous Capitol Records’. - That’s where River Phoenix died (‘you heard about that?’). - And this is ‘the heart of what we call Hollyweird’. - That’s ‘the famous Pink’s Hot Dogs’. - ‘Hey hey what have we here? And this is where the Hispanics play soccer in the street’. 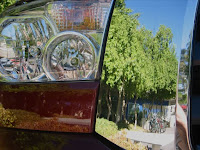 I’m astonished by the degree to which my conception of the look, feel and physical topography of LA is constituted by film, TV and fiction. Film in particular has colonised my imagination, and I look through its lenses. I ‘know’ so much of this city, somehow I recognise it and yet I’ve never been here before. Even the names of suburbs and streets trigger all sorts of stuff: Venice Beach, Santa Monica, Pasadena, Compton, Pomona, Ventura, Wilshire Boulevard, Sunset Boulevard, Cielo Drive. Everywhere the ghosts of Raymond Chandler and Philip Marlowe, The Big Sleep, The Postman Always Rings Twice, Billy Wilder’s Sunset Boulevard, Farewell My Lovely, Polanski’s Chinatown, David Lynch’s Mulholland Drive and Lost Highway, Crash, Magnolia,

And my god it’s vast, this city, an apparently infinite sprawl of almost 500 square miles in a beach-side desert bowl on the Pacific Plate beside an unstable fault line, the San Andreas, running through the ‘Pacific Ring of Fire’. 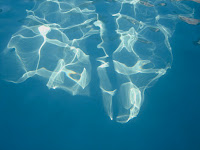 On the third day of the LA riots in 1992, in the wake of the initial acquittal of the four LAPD officers charged with ‘excessive force’ in their brutal treatment of Rodney King, King himself went on TV to say: ‘People, I just want to say, you know, can we all get along? Can we get along? Can we stop making it, making it horrible for the older people and the kids? ... It’s just not right. It’s not right. It’s not, it’s not going to change anything. We’ll, we’ll get our justice .... Please, we can get along here. We all can get along. I mean, we’re all stuck here for a while. Let’s try to work it out. Let’s try to beat it. Let’s try to beat it. Let’s try to work it out’.

Somewhere I read that one of LA’s many sister cities is Lusaka, Zambia, where I spent the first 13 years of my life. This surreal connection completely baffles me. I can make no sense of it at all. 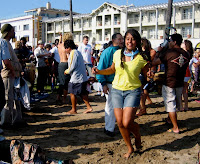 I met a beautiful, gentle man with bitten finger-nails who had looked after Kathy Acker during her last months of life. I met a dog with bright blue eyes who posed for a photo. I saw a road sign that said HOPE above a red traffic light. I saw a silver metal-clad building, its outline against the night sky like sails, like waves - or maybe more like hefty nuns in a brawl, using buckets as weapons. I met a fiery old man, his eyes rimmed with thick black makeup running down into his beard, carrying a 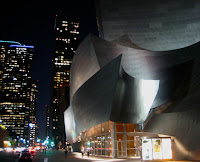 cardboard hand-written sign: HOMELESS VIETNAM VET 69 70. I saw signed photos of Bill Clinton and of Bush Snr buying donuts in the same donut shop, shaking the hand of the rather generously proportioned Mr Donut; it seemed both ex-presidents had written ‘Thankyou for great donuts’, but, on closer inspection, I realised both were signed identically by the donut man himself (were the ex-pres’s in fact delivering donuts, spending their retirement days baking?) I saw a huge man with spider web tattoos all over his hyper-pumped arms, cradling a Chihuahua in a diamante collar. I heard about a college course called ‘GYST’ (Getting Your Shit Together). I saw the uncannily empty and manicured streets of 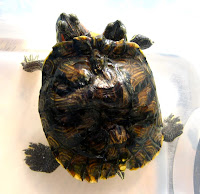 Beverly Hills. Outside the 'freak show' in a seaside suburb like Paignton on acid, I saw a turtle with two heads and a dog with five legs. I saw a mobile phone transmitter disguised as a palm tree. I saw graffiti where SHAG ME had been crossed out and replaced with FUCK THE BRITS! I watched a dazzling basketball slam-dunk in a beachside game: an inverted man hanging from the basket’s frame, upside down & shouting for a full minute, while the crowd went wild around him. I read about ‘naked short selling’, and watched the stock markets crash on TV. I saw a barrel of a man up to his chest in a swimming pool, bourbon & coke in one hand, cigarette in the other, gesticulating & flicking ash dismissively as he did deals on a mobile phone 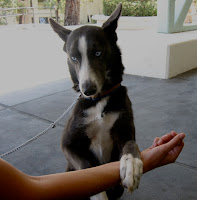 Somehow I never saw the HOLLYWOOD sign. But I did see Nick Cave at his shamanic sharpest in the Hollywood Bowl, with the Bad Seeds ablaze, and it all made perfect sense for a couple of hours or so.


Like Pynchon's San Narciso, so many bits of Los Angeles felt like 'an incident among our climatic records of dreams and what dreams became among our accumulated daylight, a moment's squall-line or tornado's touchdown among the higher, more continental solemnities - storm-systems of group suffering and need, prevailing winds of affluence'. It 'had no boundaries. No one knew yet how to draw them' (The Crying of Lot 49). 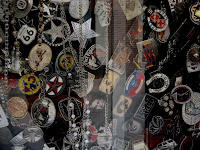 On take-off out of LAX on a plane called ‘Mystic Maiden’, with the sun low over the Pacific, we flew out over the beach and the ocean, turned left on a wide arc south of Palos Verdes, Long Beach and Seal Beach, then inland between Santa Ana and Irvine. Due west past Palm Springs, over the Joshua Tree, across the state line and into Arizona. As darkness fell over the desert, past the twinkling lights of Phoenix and Tucson; much of the sky now blue-black, like Elvis’s hair. Then, with only the horizon alight, a luminous apricot strip way behind us, we flew into New Mexico.

I couldn’t drag my eyes away from the window.

By Roswell it was night. 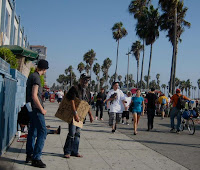