the body is a scar of the mind 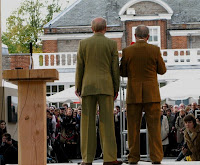 I spent the weekend in London at a 2-day Manifesto Marathon event at the Serpentine Gallery. Over 50 presentations, curated by Hans Ulrich Obrist, were given in Frank Gehry's agora-like

pavilion outside the gallery in Hyde Park. Despite the cold in this glass-roofed wind tunnel, which by late on Sunday had turned the event into a muffled scarf'n'gloves durational epic, there were some very stimulating contributions and interventions. 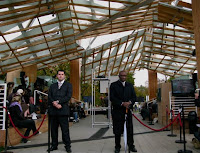 Highlights for me, in no particular order, included: Nicolas Bourriaud, talking about the polyglot 'time-specific flightlines' of an 'alter-modernity'; Gilbert & George ('The Laws of Sculptors: Ten Commandments for Ourselves'), G&G giving the perfect economical performance of G&G; Marina Abramovic ('An Artist's Life'), 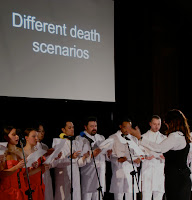 conducted by Abramovic as a kind of reiterative chorale for a large group; Agnès Varda, in full costume as a dancing potato; a hilariously provocative Adam Pendleton, with an Amire Baraka inflected prowl called 'Black Dada' that included the phrases: 'aah, the white people; we ate you'; and the curiously impressive sneer, 'shalalalalala, man: fuck you, motherfuckers'.

My friends in SpRoUt, with an elegantly formal choreography of placards and beautifully crafted texts about multiplicity, with occasional banjo accompaniment; Charles Jencks & Tino Sehgal, both of whom separately interrogated the very notion of the manifesto in the 21st century - Jencks in particular with great wit in terms of its impossibility today without irony, and the need for a 'critical modernism' within which anger, laughter and serenity are conjoined; 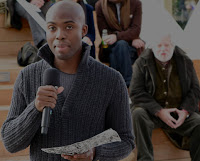 Jimmie Durham ('for the first time in history, we now have the chance & responsibility to meet each other' - the stillness of his gaze over his shoulder as a trio of birds chirruped past); Jonas Mekas, showing exquisite slides of strips of film, the projector's carousel miked up as hypnotic minimalist soundtrack.

The architect Claude Parent, playfully/seriously proposing a new architecture for Paris and London after their disappearance beneath the flood waters; Ben Vautier, staging a large 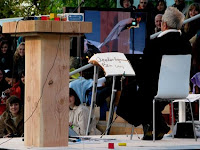 number of Fluxus-related scores; a collaborator of Rem Koolhaas whose name I missed, calling for a renaissance of functionality and simplicity, 'a new type of modernism' in the face of the 'icon-excess' of cities such as Dubai, its skyline a copy-filled 'representation of cultural greed'.

The ever present Gustav Metzger, apparently immune to 'auto-destruction' himself, contextualising this current event through slides of earlier manifestos from the

20th-century avant garde, as part of what Obrist characterised as 'an urgent resistance to forgetting'; Vivienne Westwood, who looked fantastic in haughty Elisabeth Ist mode, although she rather drifted on a bit in her looong text proposing a notion of a

trans-historical 'objective' self; Mark Wallinger, with an extremely funny and astute text, somewhat compromised by its being filtered through his deeply uneasy monotonal reading; as well as Richard Wentworth ('Da Do Ron Ron'), Karl Homqvist (You Blew Up My House'), Mark Titchner, Jean-Jacques-Lebel, and the extraordinarily intellectually energised 91-year-old historian Eric Hobsbawn. 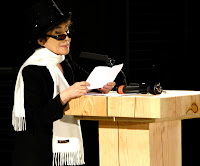 Yoko Ono was a large part of my reason for being there - she's one of the great heroes - and in the end she stole the show. It would be all too easy to dismiss her intervention as naively idealistic - and to parody it cynically - but as always her proposition was deceptive in its apparent simplicity. It generated challenging thoughts in terms of the nature of resistances to the event of encounter; in particular here her invitational pedagogy of the imagination hovered around economies of the social/relational. I take her play-fulness seriously, for she creates 'restless spaces' (to borrow Jane Rendell's words), spaces that ask questions of our relations with each other and with the world, and gesture at possible futures. In this context in London, her 'onochord' involved us learning a simple 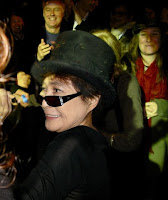 morse-like call & response of torches flashing the words 'I love you', the 'onochord' video, a brief video of details within a photograph of her with John Lennon, then an invitation to a free-for-all dance with Yoko, immediately met by 50 or so running jumping people (including me). Music suddenly pumping, with a tiny buoyant Yoko, huge grin on her face, going for it in the middle of the crowd. A frenzy of camera flashes and bobbing bodies. In a matter of minutes, she transformed the formal separations inscribed in the chilly thorougfare of Gehry's structure into a little vortex of energy, fleeting encounters and exchanges. Her beautiful groove with Jonas Mekas. She took people's hands and danced with them. Some people hugged her in the melee. At one point she took my hand and looked me square in the eye. I couldn't stop grinning. Everyone was grinning. And 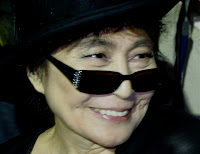 that was it; she was off into the night, in her top-hat and white scarf, shades still perched on the end of her nose, leaving us with the words: 'The body is a scar of the mind'. Blimey. Now that's enough of a manifesto for me to be going on with ...

On the way back to the train station on Sunday, I popped in to a Shell garage shop on the Bayswater Road, looking for some short-term sugary fuel for my flagging scar of the mind - and bumped into Ian Wright, classy ex-football player and impassioned, one-eyed TV pundit. You know, Wrighty: Sean's dad. In worryingly oafish fashion, and for reasons that remain mysterious and probably not worth disinterring, I said with a little too much enthusiasm: 'Ian Wright! You're a legend, man!' (I very nearly said 'leg end', like I used to say to my brother as a kid in mock football commentaries when we knocked a ball around; but at least I managed to edit that one). Ian laughed and waved cheerily as he headed out the door to his glimmering silver BMW at a jog, patting his pockets for his keys. All you need on a Sunday, jesus, a nutter down the garage. What was I thinking? I blame it on the combination of declarative manifesto overload, cold bones, Mars bar and surprise. And maybe a slightly misplaced re-emergence of Yoko's universal love, and of her suggestion that we 'keep sending the message / to the end of the year / and beyond': 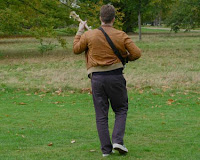 from ships
from the top of the mountains
from buildings
using whole buildings
in town squares
from the sky
to the sky
(Yoko Ono, 'onochord', 20o8).

As he drove off, Wrighty paused for moment in the forecourt to flash his headlights in the familiar rhythm. I - love - you, he signalled. Then he was gone in a silvery blur. 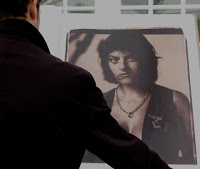 Photographs (from top): Gilbert and George; the original book version of Vivienne Westwood's manifesto; bouncers outside the Gehry pavilion, Mark Titchner in the background; Marina Abramovic and collaborators; one of the SpRoUts (Hannah); Adam Pendleton, with Jean-Jacques Lebel seated in the background; Ben Vautier; Mark Titchner; part of the glass roof in the Gehry pavilion; Yoko Ono x 3; one of the Sams from SpRoUt; Tracey Emin in the original book version of Vivienne Westwood's manifesto. All photos © David Williams
Posted by david williams at 16:17