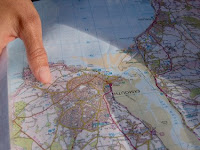 To mark the ending of Donna Shilling and Tim Vize-Martin's walk from London to Dartington (see my earlier post from 27 August here), they asked me to say a few words while they laid out objects and traces from the walk: their route maps, sticks, compass, water bottles, and other items from their rucksacks. The following text is a version of what was said. More than 100 people had gathered to greet them, and to launch the Dartington MA show. An hour or so earlier, about 50 others walked with them up the hill from Totnes, visiting various sites at the college in silence before finally stopping in the evening sunshine behind Lower Close; they were guided by Augusto Corrieri and Pete Harrison, and included Mary Bartlett, Joe Richards, Simon Murray, Alan Boldon, Tracey Warr, Emilyn Claid, Paul Clarke, Sue Palmer, Claire Donovan, 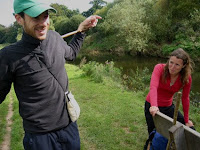 Bob Whalley, Misri Dey, Teresa Grimaldi, Klaus Kruse, Mary Southcott, Vicky Major, Emma Bush, and Giles Brokenshaw. En route through the college we encountered elusive fragments of ongoing work being rehearsed and other processes: Andy sitting with an electric guitar and amp in a storeroom doorway, plectrum poised; Ellen's moving shadow projected on to the wall of a studio; the sound of a piano on the breeze by the music studios; familiar black & white cows drifting and munching in the fields. Life goes on, apparently oblivious to the knowledge that soon we will all be gone from here. The layerings of present and past(s) at every turn, as we looped through buildings and courtyards and fields on a perfect late summer's evening ...

So, 222 miles in 21 days, from London to Dartington. The mirror image in reverse of a walk Donna first made in 2001 as part of a remarkable 3rd year project. En route this time, Donna and Tim have been joined by a number others, to accompany them on sections of the walk and to share conversation: thoughts about Dartington, memories, associations, anecdotes, perceptions of its pasts and possible futures. These co-walkers have included former and current staff and students, as well as others with a close association with the college. And now many of you here on this last leg from Totnes …

In some ways, the closing of a loop, an ending of a cycle. A slow, embodied and mindful return for Donna to a very different Dartington, itself, as we all know, about to migrate in some

unknowable form or other a little further south-west. And an almost-ending of Tim’s MA. A gathering before a dispersal. A farewell. But the walk itself has also been – and remains - an invitation to new meetings, exchanges, reflections into the future about location, context, community, change as the only real constant, about ‘home’, displacement, new beginnings, and at its heart, focused questions about what is important. Perhaps above all it invites us to inhabit something of the paradox of change: hold on tightly, let go lightly.

When Goat Island were here a year or so ago, as part of their last tour of their last piece The Lastmaker, they talked with us about endings and about how one might go about managing one’s endings. The Goats said: “As a company, we came to the conclusion that it was time to come to a conclusion … We needed to take control of our ending before our ending took control of us. We considered the possible endings we did not want to define us, endings of burnout, internal conflict, self-repetition, or diminished quality. We wanted to reject these, and to reject the notion of their inevitability. Thus we decided to approach our ending as we have tried to 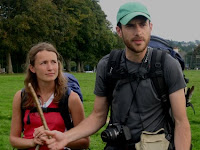 approach all our changes: creatively”. At that time many of us at Dartington felt we had no ownership of our 'ending' here, it didn’t belong to us and it was both disorienting and painful. After a while we started to look for ways to approach this ending creatively. Donna and Tim’s walk is a brilliant example of one such creative approach; and as an event it resonates strongly with Dartington’s longstanding engagement in acts of walking as a reflective, creative and performative practice.

Earlier this week, Sue Palmer and I joined Tim & Donna for one leg of the walk, 11.5 miles, much of it on the 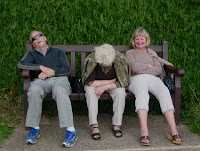 coastal path, from Sidmouth to Starcross; near the end of the day Josie Sutcliffe joined us on the esplanade in Exmouth. Many things came up for me on this peripatetic day of walking and reflecting and talking in the sunshine. In particular, a focused sense of some of those colleagues and students who have been closest to what’s really important about Dartington for me: as possibility, as open invitation, as human encounter, as continuous and sometimes precarious unfolding. Some of them are here today. Some aren’t, 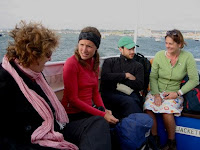 but in other ways of course they always are. And secondly, some clearer perceptions about what I have valued most and still do: perhaps in particular, the ways in which sometimes here at Dartington teaching has become so much more than some dumb claim to possession of knowledge to be conveyed – at those times it has been about not knowing, about experiencing, being present and attentive and open to the

extraordinary and often unpredictable creative possibilities of other human beings. In the best of times I have been utterly inspired by the engagement of some students, completely blown away by the quality of their work: unsettled, knocked over, rearranged, lifted up. It has changed me. What could be better than a teacher wide-eyed and joyous at something really taking place, and at the knowledge that after all he knows bugger all, and is only just beginning …?

So, I want to thank you, my teachers, my friends – 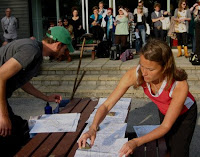 Donna and Tim, Augusto, Pete ... You are beautiful. You practice hope, it’s a thing you do with imagination, attention, and grace. And as Patti Smith once wrote, the air – this air - is filled with the moves of you. Our conversations will go on and on, I know.

In a moment I will invite you all to share a cup of tea and a home-baked Persighetti scone, and to talk, with Donna and Tim and with each other. But before that, some final words from the Goats, on the work of ending: 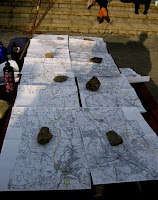 “There is much to do: the work of ending. At the moment we find it difficult to imagine work more rewarding than that. Isn’t it, after all, the work of our lives? ... We will try to live up to the words we have spoken to you today: to keep our promises, to be the people we said we were, to stage what we know in the stillest hour of the night to be true, to remind ourselves of the impossible, the historical, to choreograph a dance to repair the world, to say, “We have become human again””.

(For further details on Donna and Tim's walk, see the 'walking to dartington' blog here).
Posted by david williams at 15:59