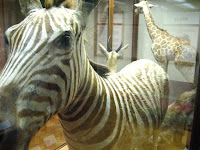 a flying and falling list
List. n. A border; a boundary (obs.); a destination (Shake.). A catalogue, roll or enumeration. Desire; inclination; choice; heeling over.

The nomadic horseback warriors of Scythians, Mongols, Tartars and Huns. The centrality of horses to the Islamic prophet Mohammed’s Jihad. The ‘wind-drinkers’ of the crusades. The fifteen horses Cortés took to the New World in 1519. The ‘iron horse’. The Suffragette Derby Day suicide. The twenty ponies who accompanied Scott on his ill-fated expedition to the South Pole in 1911. The estimated 375,000 British horses killed in the First World War. The game of buzkashi played by Afghan tribesmen. The padded mounts of picadors in the corrida. Red Rum opening shopping centres.

The Italian trainer Grisone, author of one of the 16th century’s most influential equestrian treatises, Gli Ordini di Cavalcare, who recommended persuading a ‘nappy’ horse to go forward by tying flaming straw, a live cat or a hedgehog beneath the horses’s tail. The ‘Horse Latitudes’ and the Gulfo de Yeguas (‘Gulf of Mares’), areas of the Atlantic Ocean so named because of the numbers of horses who died and were thrown overboard during early crossings from Europe to the New World. The apocryphal terror of the Aztecs when one of Pizarro’s riders fell from his horse; it is said the Aztecs had believed rider and horse to comprise one indivisible creature.

The four horsemen of the apocalypse in the Book of Revelation: conquest, war, pestilence and death. 'And I heard, as it were, the noise of thunder. One of the four beasts saying: "Come and see". And I saw. And behold a white horse' (Johnny Cash, When the Man Comes Around).

Théodore Géricault’s death from a horse fall. The flogged horses who (appear to have) triggered psychological crises in Nietzsche and Little Hans. King and Queen, turn of the century ‘diving horses’ who performed 10 metre, head-first drops into a lake at Captain Boynton’s 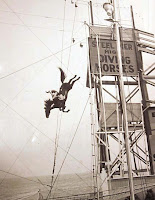 Coney Island ‘pleasure grounds’. Jerry Brown, Cocaine, Kilroy: three of Hollywood’s best-known ‘falling horses’, all winners of the Craven Award for ‘humanely trained’ animal stunt performers. The dead white horse suspended from the raised Leningrad bridge, then dropped into the river, in Eisenstein’s October. The horse who s/tumbles down a flight of stairs in Tarkovsky’s Andrey Rublev. Maurizio Cattelan’s dead chestnut horse spinning slowly above the heads of gallery-goers, its spine arched unnaturally around the harness support under its midriff - like those horses shipped live from England to the abattoirs of France, for human consumption.

The direct descent of all thoroughbreds in the modern world from one of four Arab stallions brought to England in the early part of the 18th century: the Darley, Byerley, Godolphin and Helmsley Arabians.

The New Zealand stallion Sir Tristram’s ritual burial, with his tail pointing to the rising sun. The continuing struggle over Phar Lap’s remains. The disappearance of Shergar. The White Horse of Uffington. The silver brumby.