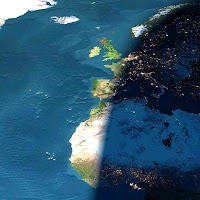 SOMEONE SITS AT A TABLE, PLAYING WITH MATCHES, SEEING HOW LONG THEY BURN. A TV MONITOR GLOWS BLUE, ITS COLOUR CAUGHT IN A GLASS OF WATER ON THE TABLE.

Have you ever seen Derek Jarman’s film Blue, which he made not long before he died? It is what it says it is – blue – a blue screen, as formal and ascetic as an Yves Klein monochrome; and some voices, talking about war and death and the shadow of a doubt and the colour blue. The film takes place as much in your head as it does on screen. 'Imagine the unrepresentable', it invites, 'it is an infinite possibility'. On the soundtrack, we hear fragments of the diary Jarman wrote while undergoing treatment for HIV-AIDS in a London hospital: stroppy, lamenting, funny. ‘The Buddha instructs me to walk away from illness. But he wasn’t attached to a drip …’ he says. He returns again and again to the experience of encroaching blindness. He describes ‘the shattering bright-light of the eye-specialist’s camera that leaves an empty sky-blue after-image … darkness made visible’…

In a book about colour, and light, John Berger wrote that, “Blue is sad, blue is memory and nostalgia, but blue is also affrontery and impudence. Blue is prize. No public one. Intimate prize. Blue says, outrageously and absurdly: I am yours, or you are mine! And no other colour can judge us. Charlie Parker became Bird because he knew about Blue…” (I send you this cadmium red).

The naked eye can see a candle in the dark 14 miles away.

In One-Way Street, in a section entitled ‘Arc Lamp’, Walter Benjamin wrote just one sentence: ‘The only way of knowing a person is to love that person without hope’. Elsewhere in the same book, he writes: ‘Separation penetrates the disappearing person like a pigment and steeps him in gentle radiance’.

The French word for a sunflower is ‘tournesol’; it turns towards the sun ...

There is a phenomenon that occurs in the mountains when a climber’s shadow falls on clouds because the sun is in a low position behind the climber. In the right conditions, coloured rings are seen around the shadow. This phenomenon is called the ‘Brockenspekter’: Brocken being the name of the mountain where the effect was first recorded. A similar effect occurs in aeroplanes when the sun projects a shadow of the plane on to the side of a cloud, where it is framed by a bright circular rainbow. This effect is called a ‘glory’.

Flying over Iran late one night last October on my way to England from Australia, I passed over the city of Isfahan – where exquisite carpets are made, where my father was made, it’s his birth place. I remembered that a flaw is built into the design of every Iranian carpet, for only Allah is perfect, then wondered what was the flaw implanted in my father, and whether it was hereditary – when from up here the city was laid out in twinkling perfection, a carpet constellation of lights in the desert night.

I meant to talk about light, and I seem to be talking about blindness and meteorology and origins and imperfection … The wheels fall off. Much clapping. Let’s start again.

If a green light and a red light are shone onto a surface at the same time, what colour do you think is produced? Yellow. If we add a third colour – blue – it will change again - and produce - white. White light. A mixture of colours, in particles and waves. Where two of these primary colours overlap, they produce a third colour which is called a ‘secondary’. There are three secondary colours: blue and green produce cyan; red and blue produce magenta; and of course red and green produce yellow. In various combinations, the primary colours – red, green, blue – can make almost any other colour. So for example a colour television picture is made up of tiny strips of red, green and blue light.

All visible things give off light, but they do it in two different ways. Some objects are light sources; in other words, they actually produce light. Some plants and animals can make their own light. Planktonic fish, for example, use self-generated lights to confuse enemies, find a mate, or lure food: their phosphorescence is typically blue-green.

If a torch is shone at a face, the face gives off light as well. But here the face is not a light source. It is simply reflecting the light that’s been made elsewhere.

When a ray of light hits a reflective surface, it is bounced back. The way in which it bounces back depends on whether the surface is flat, convex or concave, and whether it is still or moving.

Have you ever heard the story of Signora Anna Monaro, ‘the Luminous Woman of Pirano’? It was in newspapers all over the world in 1934, and has been much discussed since then. Over a period of several weeks Signora Monaro, a bed-bound asthma patient, emitted a radiant blue glow and flashes from her breasts as she slept. This bioluminescent phenomenon was witnessed by a number of doctors and medical specialists; it remains unexplained.

A number of toxicology textbooks discuss so-called “luminous wounds”, sometimes with reference to luminescent bacteria, sometimes relating this strange effect to biochemicals contained within bodily secretions. Luciferin and luciferase, and a substance called ATP (adenosine triphosphate) are normally kept apart in the body, but when they coincide they give off a low-level luminescence. The same process produces light in glow-worms and fireflies.

Luciferin. Luciferase. Lucifer, the light bringer (from ‘lux’, light, and ‘ferre’, to bring or to bear). ‘Helel ben Shahar’ in Hebrew: ‘the star of dawn’. The angel who fell to earth. Or was he pushed … 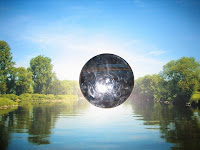 I became inexplicably electric after breaking my arm in February 1976. For two days my hair stood permanently on end, and whenever I touched people I shocked them with powerful discharges. TV sets and lights flickered in my presence, and watches stopped. I was so highly charged with static that I could light up bulbs simply by holding them. It worked with both screw-in and bayonet bulbs ....

I meant to talk about light, and I seem to be talking about anomalies, angels, freaks …

In general, light travels in straight lines. If light hits the surface of a mirror, it is reflected and leaves at the same angle. If something blocks beams of light, some rays are impeded, others carry on as before. This produces an area without light: a shadow.

In 1885, as a way of providing the city of Paris with permanent daylight, an architect and engineer called Sébillot proposed the construction of the ‘Colonne-Soleil’, an electrical sun tower 360 metres high. Sébillot imagined light penetrating into every house and apartment, as well as flooding all public spaces throughout the night. It seems that the tower was motivated in part by the civic authorities’ desire for surveillance, using light as a tool for maintaining public control: visibility as disciplinary mechanism, en-light-enment as order. Sébillot’s machine for erasing shadows was never built.

Over the past few years a Russian aerospace company called Space Regatta Consortium has been designing a giant mirror that it plans to launch into space to reflect sunlight down to Earth, appearing up to 10 times as bright as the full moon. Ultimately SRC’s goal is to launch up to 200 similar reflectors, only much bigger - each one up to 70 metres across – in order to bring bright sunlight to the Arctic and Northern Hemisphere cities during the dark days of winter: London, Brussels, Seattle, Kiev, Montreal …

Recent research suggests that half the population of the European Union, 80% of people in the USA, and a quarter of all people world-wide cannot see the night sky. Only 2% of Britain remains unaffected by so-called ‘sky glow’ or ‘light pollution’ - from security lights, floodlights, the 6.2 million street lamps turned on every night. And 55% of the present generation of British children cannot see the Milky Way, its light obliterated in the last mili-second of its journey. We are enveloped in a luminous fog that’s blinding us.

A PENCIL IS PUT INTO THE GLASS OF WATER

When light passes from one substance to another, it is bent, or ‘refracted’. When refraction occurs, an object seems to change shape, because the light rays bend as they leave the water and enter the glass and then the air. The amount of bending is very precise. In 1621 the Dutch mathematician and astronomer Willebrord Snell found that there was a characteristic ratio between a beam’s ‘angle of incidence’ (its angle before bending) and its ‘angle of refraction’ (its angle after bending). Snell’s law shows that every substance has a characteristic bending power – its ‘refractive index’. The more a substance bends light, the larger its refractive index. Water has a refractive index of 1.3, which indicates that light travels about 30% more slowly through water than through space.

In the far north and the far south, the night sky sometimes lights up with luminous curtains of coloured light known as ‘auroras’: the ‘Aurora Borealis’ or Northern Lights, and the ‘Aurora Australis’ or Southern Lights. These fluorescent lights appear when high-energy electrons from the sun, emitted most intensely during solar flares and carried in the form of ‘solar winds’, are funnelled in streams towards the North and South Poles by the Earth’s magnetic fields. There they collide with atoms of nitrogen and oxygen in the atmosphere, and flare into appearance. Colours range from pale green to combinations of red, green, yellow, blue, and violet. ‘Aurora’ is the Latin word for dawn.

The enormous influxes of electrons associated with aurorae cause rapid fluctuations in the Earth’s magnetic field that in turn may induce significant electrical currents in long conductors such as telephone wires and power lines. Sometimes, power supplies are affected, and communications disrupted. On the 13th of March 1989, for example, electromagnetically induced currents from an aurora that was visible throughout Northern Europe and North America caused a power blackout in the Quebec area.

When white light is shone through a glass of water containing a few drops of milk, blue light is scattered by the tiny particles in the water. Red light is not scattered, and just passes through. This effect is called Rayleigh scattering. It makes the liquid glow, and gives it a blueish tinge. Smoke sometimes has a blueish colour caused by Rayleigh scattering from tiny particles of ash.

“Blue is sad, blue is memory and nostalgia, but blue is also affrontery and impudence. Blue is prize. No public one. Intimate prize. Blue says, outrageously and absurdly: I am yours, or you are mine! And no other colour can judge us. Charlie Parker became Bird because he knew about Blue …” 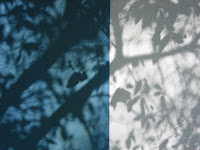