i hear these voices 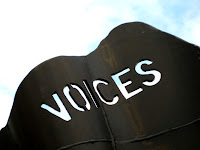 ' year after year
a pebble bank raised
by the waves of the sea
all the way to the North,
every stone a dead soul ...'
(WG Sebald, After Nature)


A bright Sunday morning in Aldeburgh, Suffolk, wandering along the shingle beach. Lots of dog walkers, the odd fisherman. The scale of the human figure in this place. 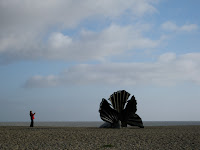 Located amongst the pebbles slightly north of the town is Maggi Hambling's 2003 sculpture Scallop - its stainless steel rim pierced with the words I HEAR THESE VOICES THAT WILL NOT BE DROWNED, a phrase from Benjamin Britten's Peter Grimes. Stencils cutting blue and white letters against the sky. The white dome of Sizewell shimmers in the distance. 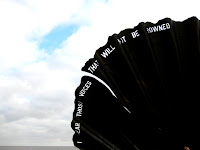 From varying angles and distances, the form of Hamblin's sculpture shifts. At different moments, the scallop shell flickers into another fleeting life as a seagull's wing, or the breaching of a whale's tail fin, or an outsized hand erupting from the beach and opening towards the sky, or the silhouette of a fishing boat, or an upturned coracle, or some drifting undersea plant, or a blackened wreck. At one point, Sue sees the turret of a submarine. 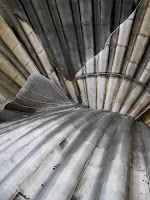 Close up, the corrugations of the shell resemble ripples on water, rhythmic wave structures, wind-sculpted patterns in sand, or perhaps sound waves, a kind of braille drone. On its sea side, the metal shell serves as a surface for sitting and staring out to sea. A contemplative throne from which to hear the voices that will not be drowned, carried on the wind. To ponder fragilities and durations, the mortality and transformations of forms.

The time of space. 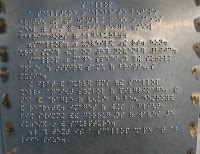 'Along the horizon
freighters cross over
into another age
measured by the ticking
of Geigers in the power station
at Sizewell, where slowly
the core of the metal
is destroyed'
(WG Sebald, After Nature).

Someone has left a bunch of fresh flowers in a small protected enclosure within the scallop.

Something of the steel's angles reminds me of the Sydney Opera House roofs, and Clive James' analogy with a gang of 'nuns in a loose ruck'. 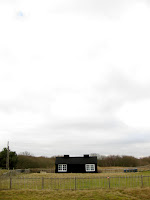 Perhaps inevitably, the elemental flatness, glare, exposure, shingle, and neighbouring nuclear power station are reminiscent of Dungeness. And a few hundred metres further north we come across a black tarred cottage rather like Jarman's (without the garden): a tiny sepulchral refuge in the face of the sea, the wind, the sky. Another place to contemplate le temps: time and weather, time's weathering.

*****
As we amble along the beach towards Sizewell, every footstep a tiny hissing avalanche, suddenly I remember Richard Long's Crossing Stones, the 1987 text work that records his coast-to-coast walk across Britain and back. From Aldeburgh to Aberystwyth in Ceredigion, West Wales - over 300 miles in 10 days. He carried with him a single pebble, which he left on the beach near Aber, before picking up another and taking it back a further 300 miles to deposit it here on the beach at Aldeburgh.

626 miles in 20 days in order to exchange two pebbles. 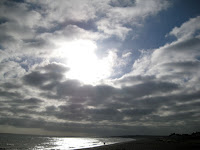 A Sisyphean act of displacement and transplant, a new assimilation on a new beach, both beaches moving incessantly with the tides. Remote stones and places brought into a new antipodal East/West relation, both pebbles crossing to the 'same' situation but utterly different. Separation/reparation. The space between - Long's long walk - now all but disappeared, his elliptical and self-effacing description its only trace. 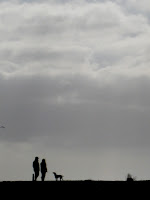 In two weeks time I'm going to Aberystwyth. Perhaps I'll take a pebble with me for the next two weeks - to London by car, to and from work, on the train to Wales - deposit it on the Cardigan bay beach, and then, maybe, one day return to Aldeburgh with a second stone from Aber. A sort of attenuated, indirect, lazy homage to Long's displacement, with a hint of its connective absurdity and none of its 'heroism'. 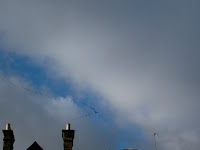 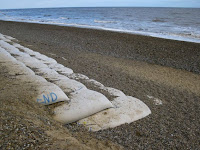 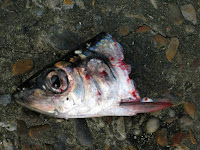