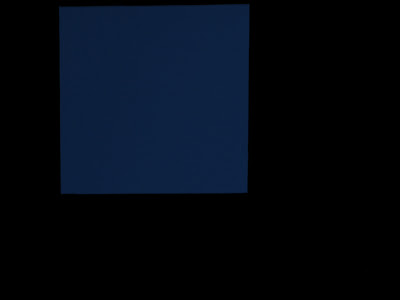 If you look straight up from within the roofless interior of St Michael's Tower on top of Glastonbury Tor, there is a perfectly framed 'skyspace', like a James Turrell installation. A minimalist art work of maximalist impact if approached slowly, as a site of durational process and the active perception of change.

At dusk, the shifts in the sky's luminance and colour are somehow distilled and amplified by the framing; and the sky's planar surface seems to be a material thing, a palpable, phenomenal entity hovering above you in the darkness of the interior.

The image above was taken on a clear evening in late December, the camera balanced on its back on my lap, shooting blind on a very slow exposure.

The sky's colour is created through the contents of the atmosphere, its chemical and particle composition, and the effect known as 'Rayleigh scattering': the interaction of light with air molecules and its elastic diffusion. 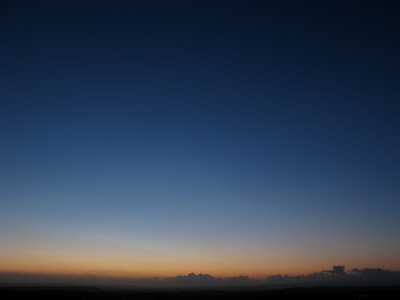 What would be the impact of differently constituted atmospheres on the perception of sky colour? In other words, what would we see if we stood on the surface of another planet and looked up? A mini Google trawl soon reveals how common such questions are, and generates some rather astonishing information about extraterrestrial skies:

It is thought that Jupiter's sky is a pale blue, Uranus's cyan, Neptune's azure. Saturn's is yellow.

Venus's atmosphere is so dense that one wouldn't be able to see the sun during the day, or the stars at night. Photographs taken by a Soviet probe suggests the sky on Venus is orange-red.

During the day on Mars, the sky is scarlet. Around dawn and dusk, it's a pinky rose, but blue around the sun.

Images taken from within Titan's thick atmosphere by the Huygens probe reveal its sky to be a pale tangerine. On the surface, it's a dark orange smog.

There is no atmosphere on the moon, so its sky is permanently black. Viewed from the surface of the moon, the sun is white. 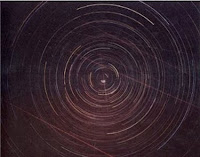