rhythm (that was then) 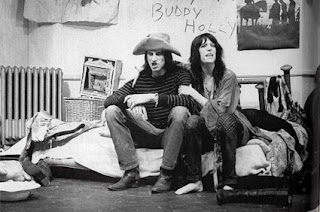 A hugely engaging conversation at a conference in Aberystwyth with Andrew Todd - architect, jazz drummer, writer, hilarious raconteur - in part spilling out of Andrew's plans to write a book about rhythm. I tell him about some of my drummer heroes: John Convertino (Calexico), Jaleel Bunton (TV on the Radio) etc. He talks jazzers. A few days later I send him a text by Sam Shepard, pasted below. Very Sam of the early 1970s: a kind of elliptical cartography of a particular 'America'. Sam was the drummer with the Holy Modal Rounders, on tour with Dylan's Rolling Thunder Review. He was also 'writer-in-residence' on that tour, producing the Rolling Thunder Review Logbook. In this book of fragments, Shepard's fascinated by the myth of 'Dylan', his personae:

'Tonight Dylan appears in a rubber Dylan mask he'd picked up on 42nd Street. The crowd is stupefied. A kind of panic-stricken hush falls over the place. "Has he had another accident? Plastic surgery?" Or is this some kind of mammoth hoax? An imposter! The voice sounds the same. If it is a replacement, he's doing a good job. He goes through three or four songs with the thing on, then reaches for the harmonica. He tries to play it through the mask but it won't work, so he rips it off and throws it back into the floodlights. There he is in the flesh and blood! The real thing! A face-lift supreme! It's a frightening act even if it's not calculated for those reasons. The audience is totally bewildered and still wondering if this is actually him or not'.

Anyway, here's Sam Shepard's text about rhythm, the one I sent on to Andrew: