'Jump, for God's sake,
Jump like your life depends on it'
(Sandra Beasley, Theories of Falling, 2008).

A few days ago, I left work around 6.30 in the evening to walk to the bus - about a mile through the darkness. Heavy cloud, no moon, and by the time I reached the entrance to the Dartington garden I could barely see anything. No torch, dammit. I knew there were granite steps a few feet ahead of me, 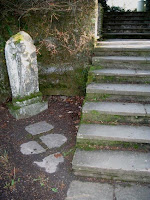 just above the Buddha statue, so I triggered my phone to try to light my way. Faffing about with the settings, I failed to find anything approximating the effect of a torch; instead, effectively I blinded myself temporarily. Seeing absolutely nothing at all now, I warily felt my way forward into the pitch black with my feet, and found the lip of the top step; I edged down step by step until I reached level ground. Then set off at a brisk pace into the night along the path I knew to be ahead of me. But I'd forgotten the stairs were divided into two flights by a small landing, and that there were still 7 steps to go. So I stepped into mid-air and dived into nothingness. For a split second I felt like some anoraky version of Yves Klein. Quite calm, just very wide-eyed, wide awake. Deceleration, expansion of a moment, then sudden rush back into the materiality of the present. With both arms outstretched I landed half on the path, the right side of my body sliding through the muddy earth of the

empty flower bed right in front of the Buddha. My body was soft, relaxed, and my hands took much of the impact, so I didn't really hurt myself. I stood up quickly, checked my computer was still in my rucksack, brushed some muddy smears off my coat and trousers, slowed my heart with a couple of big breaths, then looked round for the Buddha. I couldn't see a thing but I knew he was right there, feet away, knew he'd seen me fly and fall and crash. I figured he'd have found it mildly amusing, and I smiled before turning away and setting off again towards the bus. I felt a bit of a plonker, but was somewhat impressed by my 51-year-old body's 'intelligence', the speed and effortlessness with which 'my' instinctive emergency responses kicked in. Nothing heroic in this, they simply took over and cushioned me from my-self. Clever.

En route to the bus I managed to find every conceivable puddle and mud pool in the darkness; in the end I gave up caring and just splashed my way forward. By the time I reached the bus stop, and the street lights, my shoes and trouser bottoms were drenched. I probably left a trail on the pavement.

When the bus arrived I jumped on board squelching audibly and asked for my ticket. I gave the driver the money, and saw that my hand was caked in mud - and indeed one side of me was a thick brown slick from shoulder down. Impressive. The driver looked at me rather distastefully. While he punched out the ticket, I turned into the bright glare of the bus; everyone was staring at me as though I was a malodorous vagrant who had just stirred from a snooze in a ditch. Suddenly I was visible, and being judged. I smiled, thought bollocks, and sat down for the ride. In my imagination I went back to the Buddha still there in the night, blissfully attentive behind that lichen patina. The things he must have seen over the years from his silent, discreet vantage point.
__________________________________________ 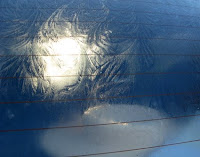 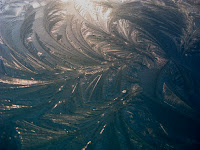 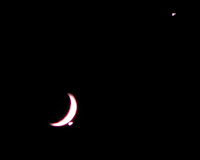 Then last night, the rare conjunction of a crescent moon with Jupiter and Venus in the clear night sky, three of the brightest objects visible from Earth. We see it as we drive home, and stop to watch from the road side. At first, the moon was transformed into the outline of a nippled breast by Venus protruding from its edge; gradually Venus separated from the moon to leave three discreet planetary bodies in drifting relation. From our earth-bound perspective they seem close together, although in reality we look past the moon's edge to planets million of miles away - the moon at 239,000 miles from Earth, Venus at 94 million and Jupiter 540 million. Astronomers suggest a similar conjunction occurred in June of 2 BC, and various religious scholars and astrologers have connected this event to the birth of Christ

(the star of Bethlehem). It seems such propitious conjunctions also relate to the 'Chemical Wedding' of Rosicrucian and Alchemical traditions. Mmm. I just thought it was beautiful, hypnotic.

Now, this is a night to walk home through the garden, I thought. You'd be able to dance down those steps and wink at the Buddha. He'd probably wink back, he sometimes does, the Enigmatic Dude with one open hand up and one down.

'The sun glows by day; the moon shines by night; in his armour the warrior glows. In meditation shines the brahman. But all day and all night, shines with radiance the Awakened One' (The Dhammapada). 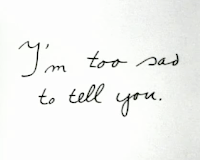 "BJA stands in a garage behind a concrete paving slab. On the floor to his left and right are illuminated light bulbs. The camera records BJA frontally from a fixed position. After approximately one minute BJA picks up the heavy concrete slab and raises it onto his left shoulder. He the shifts the block onto his left palm and holds it like a serving tray. All of this is accomplished with great difficulty due to the weight of the slab. He throws the slab onto the light bulb on his left, smashing and extinguishing it. He remains standing in the middle for a while, picks up the slab again and repeats the entire process on his right-hand side. As the second light bulb is extinguished the scene turns to black" (84). 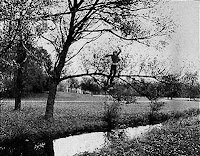 Bas Jan Ader, in an interview from 1972: "I have always been fascinated by the tragic. That is also contained in the act of falling: the fall is failure. Someone once said to me: I can well imagine that you are so obsessed with the fall; that's because your father was shot. That is obviously a far too anecdotal interpretation. Everything is tragic because people always lose control of processes, of matter, of their feelings. That is a much more universal tragedy ..." (14). 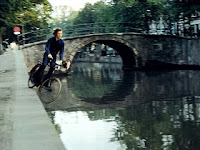 In his master's thesis (1967), Ader proposed to explore the meaning of 'fall' and its complement 'rise'. These two terms were sub-divided into categories:

1. Humpty Dumpty - fall guy - the egg suspended above the sky, and the use of the bicycle before and after its unexplained misfortune.
2. Sue Falls - table your feelings - the congratulatory letter to the Eiffel Tower and the leaning table, about to be sawed through, which contains this letter.
3. Plans for a dangerous journey and Niagara Falls ... (15-16). 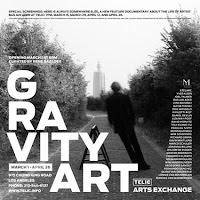 Extracts from Rein Wolfs (ed.) Bas Jan Ader: Please Don't Leave Me, Rotterdam: Museum Boijmans Van Beuningen / London: Camden Arts Centre, 2006. To see Bas Jan Ader's Nightfall, and some of his other 'fall' films (from the roof of his house, a bicycle into a canal, a tree branch into a stream etc.), see 'Selected Works' here
Posted by david williams at 18:28