'The form of the monster ... was forever before my eyes, and I raved incessantly concerning him' (Mary Shelley, Frankenstein). 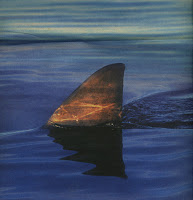 Carnivorous creatures are in the news in Australia over the holiday period. A stray alligator - an escaped pet? - wanders into a camp site in New South Wales (30 December) and is restrained with a volleyball net. A group of kayakers are circled and nudged by a great white off Sydney (28 December); one of them is knocked off his kayak but scrambles to safety. A 51 year old man is taken by a great white off Rockingham, south of Perth in Western Australia (27 December).

Sharks in particular tended to catch my somewhat paranoid imagination during my 14 years in Australia (and they still do, pathetically). Friends regaled me with terrible tales of narrow escapes and crunched surfboards and lost limbs; with more than a wink-wink ooo-er hint of 'get-a-life-Daveo', they liked to feed my wide-eyed fafucksake Englishness, within which a hedgehog is about as scary as it gets; and it was fed. In the end, I was always a little wary swimming and body surfing, much as I loved it; encounters with the sea were invariably coloured with a certain frisson. And while watching the surfers at Margaret River in W.A. or at Bell's Beach in Victoria, I often found myself scanning the water's surface for a shadowy presence. Although I saw countless darkly ominous 'shapes' (usually clumps of seaweed pulsing in the currents), I never really saw a shark.

I have a weird file of cuttings about sharks and other rather extreme human/animal encounters. Many of them from Australia: crocodile attacks; snake and shark incidents; even a kangaroo and a feral camel assault. Images of sharks hunting in swarming shoals of sardines, rolling and morphing in waves, like starlings. And a clipping about a fisherman who fell off the back of commercial boat in the sea off Queensland, the other crew members only noticing his absence when they arrived back at Townsville. Prolonged searches, but no sign of him. A few days later the same boat returned to the processing plant with the day's catch, including a huge cod; when they cut it open, they found the missing man's head in its stomach.

Stuff about Antoine Yates, who kept a fully grown Bengal tiger ('Ming') in his Harlem apartment for a couple of years until 2003, until suspicions were triggered when he went to hospital with enormous 'pit 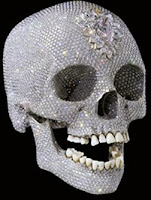 bull' bites in his thigh. An image of Damien Hurst's 'The Physical Impossibility of Death in the Mind of Someone Living' (1992), the glass-cased tiger shark floating in formaldehyde in the shark-infested waters of the Saatchi collection; and a print-out of a New York Times article about Hirst's replacement of the decaying original shark with a 25-30 year old female caught specifically for Hirst off Queensland in 2006.

There's a copy of a long article about the increase in shark attacks off Australia in 2000-1, in which a South Australian diver Geoff Grocke describes how a fellow diver was 'played with' for over an hour by a great white: 'It held him down, lay on top of him, dragged him along the bottom, knocked him around like crazy. He punched it as hard as he could, but it was like it was laughing at him. It knocked his mask off ... he felt around and put it back on. When he could see, there was this head about half-a-metre away, just looking at him. He crawled from rock to rock trying to escape, but it just kept after him. He told us he was hysterical, howling and screaming into his mask. In the end, it just got sick of him and swam off. He wasn't the same after that; he gave up diving for a while, and now he won't even talk about it' (Frank Robson, 'The fatal shores', The Age magazine, Australia, 3 February 2001. Hilariously, The Age's colour supplement is called 'Good Weekend').

Then there are all sorts of loosely related bits and pieces, including a cutting of AC Grayling on 'Loss': 'To take life in armfuls, to embrace and accept it, to leap into it with energy and relish, is of course to invite trouble of all the familiar kinds. But the cost of avoiding trouble is a terrible one: it is the cost of having trodden the planet for humanity's brief allotment of less than 1,000 months, without really having lived' (Guardian, 4 August 2001).

Pride of place goes to an astonishing, wise text called 'Being Prey' by the late environmentalist and ecofeminist Val Plumwood, sent on to me years ago by Adrian Heathfield (download it here). I recommend it for a little Christmas reading, for it is a text in which all sorts of assumptions are turned on their heads in bewildering and humbling ways.

The file's most recent addition, from October this year, is an image of a young Irish surfer riding a wave off the coast of Perth with a 500 lb great white lurking in the green wall of the wave alongside him, as if it's surfing too, like a dolphin. (Or is it a bleached log, an innocuous bit of flotsam drifting around the Indian Ocean? In truth, it's hard to tell from the image). The surfer had been unaware of the shark's presence until he was shown the photograph later. The caption above the image, inevitably sensationalist: 'White Terror: Surfer shares wave with killer shark' (Guardian, 4 October 2008).
___________________________________________ 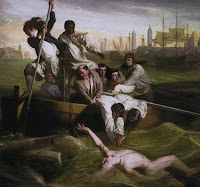 'Watson and the Shark' (1778), by John Singleton Copley: National Gallery of Art, Washington. Brook Watson was 14 years old when a shark in Havana harbour took his right foot. Years later, as Alderman of London, he commissioned this painting; he also put a shark in his coat of arms. (Source: Thomas B. Allen, Shark Attacks, New York, Lyons Press, 2001).

To access an edited online version of Frank Robson's 'The fatal shores' (from the Sydney Morning Herald, 3 Feb 2001), see here