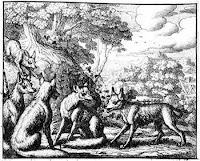 to that origin, so long as we fail to find, beneath the chatter of words, the primordial silence, and as long as we do not describe the action which breaks this silence' (Maurice Merleau-
Ponty, Phenomenology of Perception).

Why are some singers & musicians so alluring? (Is it in part because I am neither?) In particular with certain singers in a live event, something very mysterious can happen: the spatialising of an interiority, the making manifest of the topography of an embodied, affect-laden internal process. Perhaps it's related to Beckett's fascination with the transposition of breath into sculpted sound and into language: the conjunction of immateriality and the materially palpable in the border lands of the mouth. Perhaps it's related to something like Lorca's duende, a passionate & ephemeral life force in the face of mortality. Beyond technique into the marrow of forms within the sounds of shadows, blood, wound, wind: duende the smasher of styles, like Goya 'painting with his knees and fists in bituminous black'. A body burns, becomes transparent to release contoured energy that is of that body but does not seem to belong to it; and it touches us, moves us. Maybe. Who knows? I'm sure as hell no expert.

But what's clear to me (although hard to articulate without recourse to epiphanic metaphor) is that, live, some singers flare into appearance in a context so often deadeningly laminated by surface appearance(s). Something else happens - the paradox of vulnerable courage in present-ness, rooted in a body here/now and bearing the grain of that body's 'musics'. The event of breath moulded into vibration, rhythm, texture, intonation, colour: music as feeling's kinetic sculpture; song as a soul portrait written on the wind. It can feel like the privileged witnessing of the baring of a soul that implicates us all, and sometimes we meet and fall in love with those that have this power.

(It is perhaps interesting to note in passing the news from Italy last week that stringent new measures passed by Silvio Berlusconi's government to further restrain mafiosi and other convicted criminals in prison include a ban on inmates singing. It seems they've been passing on messages and orders in songs in native Southern dialects which are impenetrable to their Northern Italian wardens - Neapolitan, Sicilian, Pugliese etc. So, song as outlaw private language, seditious conduit for society's others).

Last Thursday night, Fleet Foxes played in Bristol. A beautiful 5-piece band from Seattle who understand the layered conjunctions of close harmony voices and sounds (they've called their music 'baroque harmonic pop jams'). At the same time they create space for astonishing solo sections sung by Robin Pecknold, alone onstage with his guitar. Looking like a lanky pioneer hybrid of a somewhat shy Russell Brand and my friend Swen Steinhauser, Robin has the face of a Giotto or Cimabue, and the spectral presence of Bob Dylan close at hand. He sang solo versions of 'Oliver James' and 'Tiger Mountain Peasant Song' from the Fleet Foxes album, as well as Judee Sill's 'Crayon Angels' and a startling unplugged 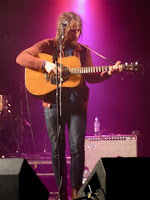 'Katie Cruel' (drawn from Karen Dalton's version on her album In My Own Time). He stuffed the lead from his guitar into his jacket pocket, walked out into the darkness on the apron of the stage, and sang. Just the rhythmed chop of his guitar, his silhouette, a tapping Blundstone, and that voice unleashing and reanimating a traditional song with its roots hundreds of years ago. And something happened ...

A fleet fox in the room.
Power and fragility. So young and yet so old.
Somehow, it fills me with hope and courage.
This action which breaks the silence.

When I first came to town they called me the roving jewel
Now they’ve changed their tune, call me Katie Cruel

For Karen Dalton's 'Katie Cruel' on In My Own Time (1971), go here: 'I was going to say it’s a fragile voice. But of course it’s not a fragile voice, because it’s been smashed into a million pieces. In ‘Katie Cruel’ she does embody the character absolutely. There’s something that’s inherent in her voice, an understanding of this kind of sorrow. She knows how to be sad' (Nick Cave in album booklet).

'Karen's voice is a voice for the jaded ear; a combination of Billie Holiday, Ella Fitzgerald and Jeannie Ritchie, the Appalachian singer. There's a horn quality to it and her phrasing is exquisite. I once heard it described as cornmeal mush, but it's more than that. When she sang about something, you believed her ... Karen had true, true greatness that had not been recognised. I said to her, 'It's going to annoy the hell out of you but you'll probably only get recognised after your death'. I think her time is coming now, because people are fed up of slick, over-produced voices. And this old world is not a child any more, we need the truth. It doesn't need to be in words, it needs to be in delivery' (Lacy J Dalton, in Laura Barton, 'The best singer you've never heard of', The Guardian, 23 March 2007).

If I should leave you
Try to remember the good times
Warm days filled with sunshine
And just a little bit of rain
(Karen Dalton, 'Little Bit of Rain'')

For Robin's brother Sean Pecknold's videos for Fleet Foxes' 'He Doesn't Know Why' and 'White Winter Hymnal', and other animations, go here