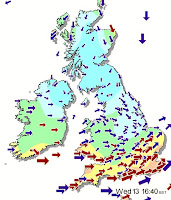 In those art practices that most engage me, there is always weather. An environment in process, a ‘field’ rather than an ‘object’. An invitation to predictive interpretation of signs, patterns, behaviours in atmospheres characterised by complexity, variation, possibility, anomaly, disturbance, ephemerality, unfinishability; the core dynamic lies in the relational axis between stability and instability. An implicatedness in sensory, phenomenal events: temperature, wind speed/direction, humidity, pressure, atmosphere, resultant phenomena of various kinds (e.g. optical). Weather is always contextual, and at the same time in the ephemeral spatio-temporal events that characterise its happenings the local is invariably implicated in the trans-local. Where does the weather begin, and where does it end? ‘Any event is a fog of a million droplets’ (Deleuze & Parnet 1987: 65).

Blow Wind Blow / You are my Sunshine / California Sun / I Don’t Care if the Sun Don’t Shine / Just Walking in the Rain / After the Clouds Roll Away / The Wind Cries Mary / Come Rain or Shine / It’s Raining / Jamaican Hurricane / Let the 4 Winds Blow / Stormy Weather / A Place in the Sun / The Summer Wind / Uncloudy Day. (Playlist from ‘Weather’, the first episode of Bob Dylan’s recent US broadcasts as a DJ on ‘ Theme Time Radio Hour: dreams, schemes and themes’).

Consider weather’s centrality in histories, politics, cultures, economics, science, bodies, identities, emotional lives. Today our media is full of weather and/as catastrophe: the floods, droughts and other eruptive anomalies, the ‘storms from Paradise’ of global warming throwing us all backwards into the future. Then there’s the potency of weather in the imagination: different poetics of weather. Hovering in my mind is a cloud of artist-practitioners of weather, their noses to the wind, including authors of haiku (with its obligation to include kigo, a season or weather word), Walter de Maria, Robert Smithson, Robert Morris, Nancy Holt, James Turrell, Denis Oppenheim, the Harrisons, Gary Snyder, Andrei Tarkovsky, Bill Viola, Olafur Eliasson, Tacita Dean, Min Tanaka (‘body weather’), Richard Long, Simon Whitehead, Lisa Robertson, Ben Marcus (author of the terrifying ‘The Weather Killer’, 1998). And what of weather and/as consciousness? Both involve dynamic, non-homogeneous environments forever in process, mutable, an ever-changing flux of micro-events in a relational field of infinite complexity …

As a most pervasive, protean and powerful force, perhaps weather suggests a dramaturgy of unfolding through a ‘logic of intensities’, an ‘eco-logic’, concerned ‘only with the movement and intensity of evolutive processes. Process, which I oppose here to system or structure, strives to capture existence in the very act of its constitution, definition and deterritorialisation’ (Guattari 2000: 44). Here we are close to Lyotard’s ‘theatre of energetics’, in which what appears is ‘the highest intensity … of what there is, without intention’ (Lyotard 1997: 288).

Philosophy sometimes intertwines promiscuously with meteorology, particularly in Lucretius, Spinoza, Nietzsche - perhaps above all in Deleuze whose staging of thought is a veritable becoming-weather. The shock of thought as lightning strike, the book as perfect storm and weather-factory. Consider the lexicon of Gilles the weatherman: the thisness of the concept, its event; difference and repetition; relations of speed and movement, symptomatologies of force; immanence, assemblage, anomaly, multiplicity, rhizome; connectivity, encounter, flow; the outside, the fold; intensity, sensation, ‘non-subjectified’ affect; haecceity, becoming-molecular, ‘a Life’. It’s all there.

Of course all outdoor site work necessarily engages with the unpredictabilities of weather, either opening itself to the generative possibilities of weather’s creative agency within the work – weather as co-author of events in contexts where site is conceived as active medium - or (fruitlessly) trying to deny it entry to the site as ‘container’/ backdrop. But what about encouraging weather indoors? In studio or gallery-based practices, weather can occur in the form of phenomenal events generated, deliberately or otherwise, by a particular set of conditions. Sometimes weather’s intervention is formally representational and consciously framed as artifice: e.g. the hosed indoor ‘rain’ in Brith Goff’s Gododdin, 1998, which seems to have been generative both in terms of its excess in the scenography’s ‘material imagination’ and of an invited recognition of the predicament of performers. Or, more complex in terms of perception and embodied immersion, Olafur Eliasson’s installed Weather Project in the Tate’s Turbine Hall (2003), with its sublime indoor ‘sun’ and haze of ‘clouds’, and its elaboration of an anomalous behavioural ‘field’ indoors. At other times, weather’s presence represents an opportunist preservation of the by-product of felicitous accident: e.g. raindrops falling through the broken glass dome of Peter Brook’s Bouffes du Nord and landing in a small pool in The Mahabharata.

On other occasions, weather’s apparition is both more artificial and actual, more wonder-ful for the nature of its contrivance. I think of the creation of clouds in a number of Lone Twin performances, enactments of a poetics, economy and ecology of transformation, circulation and inter-connection, in which Gregg Whelan and Gary Winters’s hot sweating bodies literally steam to become further imbricated in the hydrological cycle. The clouds actualise an ephemeral passage that soon dematerialises, leaving in their trail a palpable density of associations and metaphorical after-lives, as well as a certain poignancy, an absence. (‘The cloud, then, is no more than this: I’m missing something’ - Barthes 1978: 170. Italics in original). At a time when the cumulative actions of human beings are becoming a ‘force of nature’, clouds and rain always contain traces of other histories, other bodies, elsew/here. Like the best stories, weather always creates an ‘electrified periphery’ (Marcus 2004: x).

In today’s paper, details of yesterday’s weather ‘around the world’; in a moment of drought I look for the presence of rain elsewhere and the local temperatures, scant details of the event of ‘nature’ in different urban contexts; Amsterdam (18), Brussels (15), Copenhagen (20), Dakar (28), Florence (23), Karachi (30), Milan (24), New Delhi (29), Oslo (17), Strasbourg (16), Warsaw (15), Wellington (7). Here today, ’bright spells, but showers are likely later (20)’ - so, another day of multiple weathers, but the showers haven’t materialised yet. Meanwhile, there are tropical storms in the north-west Pacific, one of them developing into a super-typhoon called Saomai which has just struck the south-east coast of China; I wonder what’s happening there right now? Multiplicity and difference in the pliable simultaneity of space. (Michel Serres has explored the fact that the French language uses the same word for time and weather, temps).
As Doreen Massey writes, space is ‘the sphere of the possibility of the more-than-one. Without space there is no ‘multiplicity’ in that sense … That is the meaning of space as a simultaneity of ongoing stories: that sense of ‘right now’. Right now there is someone growing mangetout for your table; right now there is chaos on the streets of Baghdad; right now it is just about noon on the West Coast of America (while it is already evening here in London)’ (Massey 2003: 114). Right now, as the sun falls, people are endeavouring to return to their shattered homes in Southern Lebanon. Right now severe rainfall has produced catastrophic landslides in North Korea. Right now it’s fucking cold and wet in Wellington.
The ‘weather-ed’ works I privilege as models are radically porous, they propose: let what’s out-there in-here. Take, for example, Yoko Ono’s ‘video sculpture’ Sky TV (1966), installed at the Indica Gallery in London. Like so many of her Fluxus-inflected conceptual works, which rehearse a pedagogy of the imagination, Sky TV exists first as an instructional text, a score, that can be effected materially or imaginatively in order for the work to be realised; the work will exist if it is ‘constructed in your head’. A camera is placed outside the gallery, focused on the sky, with a live-feed relay to a monitor inside. In ways reminiscent of Duchamp and Cage, this work undoes the integrity of the self-contained art object. It punctures the confines or boundaries of the gallery, and dis-places a mediated everyday; as with Cage’s 4’33”, questions of authorship, control, perception, boundary and the parameters of art come into play. It introduces a simultaneity of times and spaces, a composite rhythmed space-time, an interface. It invites us to apprehend and contemplate processes and unpredictabilities unfolding beyond the agency or ownership of an art commodity context, while paradoxically riding on the hypnotic allure of TV.

’This weather is the vestibule to something fountaining newly and crucially and yet indiscernibly beyond. Perhaps here we shall be other than the administrators of poverty …’ (Robertson 2001: unpaginated introduction).

And then there’s the verb, ‘to weather’, and the effects of weather(ing) over time. Brecht’s costumes at the Berliner Ensemble, sculpted and grained by bodies. The pitted back wall of the Bouffes du Nord, scarred by fire and water. The landscape of Beckett’s face. The scuffs, smears, stains, rubbings, wear, tear and other traces inscribed by humans and others into the very fabric of the urban and domestic, through the habitual, the unintentional, the accidental: the stuff of a forensics of anonymous histories and overlooked behaviours, and of deep mappings of location, occupancy, the passage of bodies now absent … (I am thinking in particular of performance maker and scholar Mike Pearson’s work on ‘archaeologies of the contemporary past’ and the ‘restoration of an absent present’: see e.g. Pearson 2006) 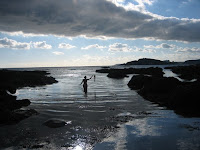