the idea of south


'You do not have to sit outside in the dark. If, however, you want to look at the stars, you will find that darkness is necessary. But the stars neither require nor demand it' (Annie Dillard 1988: 31). 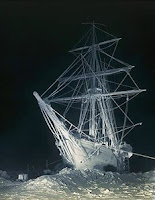 During the Olympics, I've been reading about Antarctic explorers - I'm not really sure why. Perhaps it's the terrible weather here in Devon, combined with associations leaking from the inescapable nationalist rhetoric of 'heroic' endeavour from the BBC in Beijing. Certainly some possibility of a vicarious 'outside' and 'elsewhere' as an antidote to despondent peering out at the rain from the sofa during yet another medal ceremony with oh so jolly national anthem accompaniment.

In particular, I've been looking at David Thomson's fine book about Scott, Shackleton and Amundsen (2002), Scott's journals, Apsley Cherry-Garrard's The Worst Journey in the World, Trevor Griffiths's screenplay for The Last Place on Earth, Sarah Wheeler's Terra Incognita, Francis Spufford's I May Be Some Time, and collections of Frank Hurley's and Herbert Ponting's remarkable photographs of Shackleton's Endurance and Scott's Terra Nova expeditions respectively. Finally, and much less familiar to me, some material about the Australian geologist Douglas Mawson, whose 1912-13 trek with Mertz and Ninnis during the Australasian Antarctic Expedition is perhaps (alongside Shackleton's journey from Elephant Island to South Georgia 3 years later in 1916) the most bewildering story of them all.

The bare bones of Mawson's journey, set in inconceivably harsh blizzard conditions 'among rolling waves of ice', are as follows: Ninnis's sudden disappearance down a crevasse with the dog-drawn sledge containing most of the team's provisions - the two others peering down the crack in the ice to see nothing but a dog on a ledge 150 feet below, still alive but its back broken; 315 miles to get back to base - enough food for only 10 days, but nothing for the dogs; an improvised tent using a tent cover, some skis and sledge struts; the gradual cull of dogs for food during the return journey, everything consumed, including the paws (stewed); Mertz's death en route, probably hastened by Vitamin A poisoning from eating dogs' livers; Mawson's fall into a crevasse, his sledge wedging in the ice above his head, then hauling himself out by the rope from which he dangled; his eventual arrival back at the base, Cape Denison, with his ship the Aurora having already departed and now just a dot on the horizon; when the men who had stayed behind to look for him eventually found him, unrecognisably bedraggled, they asked: 'My God, which one are you?'; and finally, another winter spent in the huts before the Aurora's eventual return. Mawson's story is genuinely astonishing, humbling, and at times oddly funny in pitch-dark ways that remind me of Joe Simpson's Touching the Void.

A few notes on what lingers for me from this bleak but fascinating reading:

* the mythic shape of some of these narratives, and their interrelations with the constitutive myths of 'nation', 'empire', 'patriotism', 'heroism', 'leadership', 'manliness', 'nobility' (already rehearsing some of the core drives that would lead to mass carnage and suffering in the first World War); the power of these stories in our imaginations, and at the same time the futility and absurdity of so much of what actually occurred, and the muddle of motives; 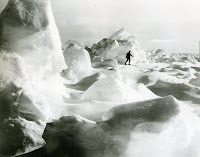 * the degree to which the 'great white south' seems to have appealed as a site of wholesome, untarnished 'purity', 'perfection' and possible 'salvation' for many of the British explorers (including Scott), those rather 'boy's own' conservative men unable to deal with the complexities and changes afoot in the 'civilised world', its 'order' threatened by disarray in the face of the contradictions of modernity. In relation to solitude, Annie Dillard quotes Plotinus, 'the flight of the alone to the Alone' (1988: 48). With these men there is the sense at times of mythical quests in the fulfilment of destinies, or allegorical journeys into the sublime in which 'pilgrims' are obliged to perform some kind of terrible, futile penance - but for what?;

'The Pole of Relative Inaccessibility is "that imaginary point on the Arctic Ocean farthest from land in any direction". It is a navigator's paper point contrived to console Arctic explorers who, after Peary & Henson reached the North Pole in 1909, had nowhere special to go. There is a Pole of Relative Inaccessibility on the Antarctic continent, also; it is that point of land farthest from salt water in any direction. The Absolute is the Pole of Relative Inaccessibility located in metaphysics. After all, one of the few things we know about the Absolute is that it is relatively inaccessible. It is that point of spirit farthest from every accessible point of spirit in all directions. Like the others, it is a Pole of the Most Trouble. It is also - I take this as given - the pole of great price' (Dillard 1988: 19).

* I am struck by the genuinely extraordinary qualities of people like Douglas Mawson, or Tom Crean and William Lashly, and the flawed ambiguity of so many others entertaining and internalising the severely compromised myth of 'heroism' and the idea of south - Scott, Teddy Evans, Shackleton, etc.;

* the inadequacy of many of the British explorers' understanding of the possibilities and predicaments of animals in these horrifying conditions: the incompetence and sentimentality in their use of dogs and ponies, despite advice from the Norwegians (Nansen and others) - and the gradual becoming-animal of Scott's abject Polar party, man-hauling their way to their deaths - unaccommodated man, bare life, reduced to the most bestial of states physically, and yet oh so disarmingly calm and dignified - so 'English' - in their discovery of failure and in their dying (of landscape and weather);

* the actual material implications of the weather conditions for the human body and mind, beyond the stiffness of upper lips clouded by 'frost smoke': depression, cramps, freezing sweats, swollen limbs, bleeding gums from scurvy, shivering fits ('until I thought my back would break', 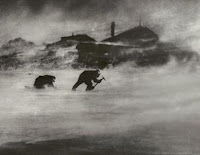 Cherry-Garrard), diarrhea, mental confusion, exhaustion, snow blindness, the blackened festering tissue of frostbite on noses, fingers and toes, hypothermia, etc. The mystical quietism of the naturalist Edward Wilson - 'I can never forget that I did realise, in a flash, that nothing that happens to our bodies really matters' (Thomson 2002: 148). On the horrors of frostbite, Frances Ashcroft writes: "When freezing is rapid, needles of ice may crystallise inside cells, puncturing cell membranes. If ice crystals rub together, they may physically tear the cells apart, which is one reason it is not advisable to rub frostbitten areas' (2001: 72);

* the radical perceptual disorientation of white out, of the ganzfeld of absolute 'smooth space': 'Smooth space is occupied by intensities, wind and noise forces, and sonorous and tactile qualities, as in the desert, steppe, or ice. The creaking of ice and the song of the sands ... Where there is close vision, space is not visual, or rather the eye itself has a haptic, non-optical function: no line separates earth from sky, which are of the same substance; there is neither horizon nor background nor perspective nor limit nor outline or form nor centre; there is no intermediary distance, or all distance is intermediary. Like Eskimo space' (Deleuze & Guattari: 479, 494).

* the shocking suddenness of loss of life: on Scott's Discovery expedition, for example, Seaman Vince, wearing inappropriate boots, sliding helplessly from the ice into the sea, never to be found (like Evans, like Oates); and then there's the dog Osman who was washed overboard during the Terra Nova's journey south from New Zealand, only to be thrown back onto the deck by another wave;

'My name is Silence. Silence is my bivouac, and my supper sipped from bowls. I robe myself mornings in loose strings of stones. My eyes are stones; a chip from the pack ice fills my mouth. My skull is a polar basin; my brain pan grows glaciers, and icebergs, and grease ice, and floes. The years are passing here' (Dillard 1988: 49).

* the arrogance and chauvinism of some of the British sponsors and of members of the Royal Geographical Society, and their outrageous dismissal of Amundsen as some kind of dodgey dilettante-cum-'cheat', rather than the consummately prepared & emotionally uncluttered pragmatist in his element that he seems to have been;

* the anachronistic language of repressed Edwardian men, so often unable to communicate their fragilities, fears and desires to themselves, let alone each other: Scott's use of the phrase 'up queer street'; Shackleton's insistence on curtains for the beds in the shared hut in order to allow men to 'sport their oak' in private;

'One wonders, after reading a great many such firsthand accounts, if polar explorers were not somehow chosen for the empty and solemn splendor of their prose style - or even if some eminent Victorians, examining their own prose styles, realised, perhaps dismayed, that from the look of it, they would have to go in for polar exploration' (Dillard 1988: 22-3).

* the elaborate (and profoundly understandable) activities generated to distract and amuse during the uncomfortable, long periods of waiting: illustrated lectures, 'scallywag competitions' (whatever they were), theatrical performances with cross-dressing, football on the ice, the printing of a paper (the South Polar Times) - the weird inventiveness and playful resilience of human beings in the most extreme of conditions; and the surrealism of the determination to retain some kind of (middle-class) 'normality' despite everything, e.g. the Christmas meal Scott and the others had lugged onto the ice plateau en route to the Pole - although they were fast running out of supplies, they enjoyed pemmican and horse meat stew, with onions, curry powder and biscuit; a sweet hoosh of arrowroot, cocoa and biscuit; plum pudding, and finally raisins, caramel and ginger. Happy Christmas ...

'Wherever we go, there seems to be only one business at hand - that of finding workable compromises between the sublimity of our ideas and the absurdity of the fact of us ... I have, I say, set out again. The days tumble with meanings. The corners heap up with poetry; whole unfilled systems litter the ice ...' (Dillard 1988: 30, 47).

For an outstanding article on the RSA Arts & Ecology website by the writer Tony White - about Antarctica, Shackleton, climate change and opera - see here. My thanks to Barbara Campbell for the link.