something out of nothing

'You gather things up like a person who leaves a burning house, which means very randomly ... I am not seeking an answer. I just want to say, "This is very odd, indeed"' (WG Sebald)

I have been re-reading texts by and interviews with WG Sebald. Alongside the uncanny repetitions and correspondences, the looping narrative structures, the mysterious photographs that act like 'barriers or weirs which stem the flow' and 'slow down the speed of reading' (Sebald), the displacements, double binds, silent catastrophes, spectral (re-)apparitions, somnambulist circlings and vertigo, the constellations of melancholic stones and dust and fog of this 'ghost hunter', I have been struck by his accounts of the 'questionable business' of writing and its compulsive, draining 'preoccupation with making something out of nothing'.

In an interview with Eleanor Wachtel (1997): 'Once you get hold of a thread you want to pull it out and you want to see, you know, what the colours of the pattern are. And the more difficult it gets ... the more intrigued you become, the more you know that there is something buried there. And the less you want to give up on it". 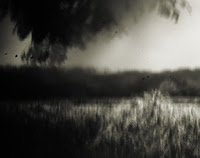 Later in the same interview: 'It is a characteristic of our species, in evolutionary terms, that we are a species in despair, for a number of reasons. Because we have created an environment for us which isn't what it should be. And we're out of our depth all the time. We're living exactly on the borderline between the natural world from which we are being driven out, or we're driving ourselves out of it, and that other world which is generated by our brain cells. And so clearly that fault line runs right through our emotional and physical makeup. And probably where these tectonic plates rub up against each other is where the sources of pain are. Memory is one of those phenomena. It's what qualifies us as emotional creatures, psychozootica or however one might describe them. And I think there is no way in which we can escape it. The only thing that you can do, and that most people seem to be able to do very successfully, is to subdue it. . And if you can do that by, I don't know, playing baseball or watching football on television, then that's possibly a good thing, I don't know".

Eleanor Wachsel: "What do you do?"

Sebald: "I walk with the dog. But that doesn't really get me off the hook. And I have, in fact, not a great desire to be let off the hook. I think we have to try to stay upright through all that, if it's at all possible".

From a public discussion with Joseph Cuomo (2001): "I never liked doing things systematically. Not even my PhD research was done systematically. It was always done in a random, haphazard fashion. And the more I got on, the more I feel that, really, one can only find something in that way, i.e., in the same way in which, say, a dog runs through the field. If you look at a dog following the advice of his nose, he traverses a patch of land in a completely unplottable manner. And he invariably finds what he's looking for. I think that, as I've always had dogs, I've learnt from them how to do this ...

"And so you then have a small amount of material, and you accumulate things, and it grows; one thing takes you to another, and you make something out of these haphazardly assembled materials. And, as they have been assembled in this random fashion, you have to strain your imagination in order to create a connection between the two things ... You have to take heterogeneous materials in order to get your mind to do something that it hasn't done before. That's how I thought about it. Then, of course, curiosity gets the better of you...".

From The Rings of Saturn, in a section related to Michael Hamburger:"For days and weeks one racks one's brains to no avail, and, if asked, one could not say whether one goes on writing purely out of habit, or a craving for admiration, or because one knows not how to do anything other, or out of sheer wonderment, despair or outrage, any more than one could say whether writing renders one more perceptive or more insane. Perhaps we all lose our sense of reality to the precise degree to which we are engrossed in our work, and perhaps that is why we see in the increasing complexity of our mental constructs a means for greater understanding, even while intuitively we know that we shall never be able to fathom the imponderables that govern our course through life". 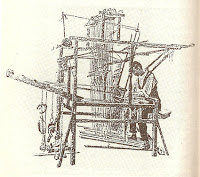 And finally, in the same book, Sebald returns to the recurrent trope of writing and/as weaving: "That weavers in particular, together with scholars and writers with whom they had much in common, tended to suffer from melancholy and all the evils associated with it, it is understandable given the nature of their work, which forced them to sit bent over, day after day, straining to keep their eye on the complex patterns they created. It is difficult to imagine the depths of despair into which those can be driven who, even after the end of the working day, are engrossed in their intricate designs and who are pursued, into their dreams, by the feeling that they have got hold of the wrong thread".
Posted by david williams at 22:45