taking a line for a walk 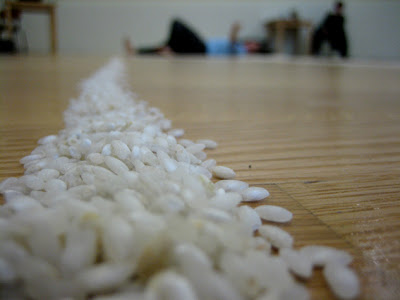 The following text was written for my friends and sometimes collaborators Malgven Gerbes and David Brandstätter, two Berlin-based choreographer-performers. It is a response to their performance work Notebook, which will be performed at the Internationalisches Festival des zeitgenössischen Tanzes der Landeshaupstadt München in Germany in October 2010.

____________________________________________________
Taking a line for a walk (for malgven & david)
The memory of movement.
If I think back to when I first spent time in a studio with Malgven, two things struck me. First, her energized drawings in her notebook – usually architectural configurations, spaces materializing on the empty page before your eyes. A new page, a new drawing. She used paper so freely, I once suggested to her that she was hungry for space. Secondly, her remarkably patient attention to detail in moving, the economy and clarity of her impulses, the dynamism of her stillness. Her embodied lightness reminded me of a phrase Paul Valéry once wrote, about being ‘light as a bird, not light as a feather’. On paper and on the dance floor, she inscribed space with self-sufficiency and the lightest of touch; images appeared, and then dispersed. Erasure as release, return to potentiality.
If I think back to when I first spent time in a studio with David, he seemed to be a horse to Malgven’s bird. A more animal presence, an unpredictable energy flaring like magma. Watching, smiling, prowling, jumping. He struck me as extraordinarily sensitive, a live wire - and what animal behaviourists call a ‘lean-into’ creature, yes, like a horse: tactile, relational, capable of great generosity and stillness.
In Notebook, Malgven and David are both engaged in mark making, conjuring up ephemeral architectures and dynamics, places and rhythms. She draws with her uncannily precise movement and her gaze, sculpting space; he draws with rice. A white Fuji-mound of rice unfurls like a ball of string, and the line is taken for a walk. At first it registers rectilinear spaces, there and not there, shadow traces of remembered or possible architectures established for Malgven’s embodied inscriptions - and then wiped away with the lightest of touch. After a while, in my mind at least, the rice becomes something more complex and elemental, like weather: rain drops, snow, wind, then waves unfolding across a shore with a hiss.
Only the barest of means are employed: two people, a broom, the floor as scriptable surface, the rice – a homogeneous singularity and a granular multiplicity. The rice is both wave and particle, like light.
Attention is amplified. Stillness moves.
Inevitably I think of calligraphy, Zen gardens, and the (di)stilling of the ego to a deep-breathing economy of form. I think of the term ‘ma’ in Japanese aesthetics: the ‘empty’ space in a bowl that is the ground for form’s appearance; the depth in an ink-wash painting; the silence in music; the active space of potentiality between things. According to ‘ma’, emptiness is active and full to overflowing.
I think of Freud’s Wunderblock, in English often called the ‘mystic writing pad’, the surface for memory’s inscriptions and erasures, the notebook for the work of consciousness.
And I think of William Blake: ‘To see a world in a grain of sand …’
In Julien Crépieux’s video images, his camera another notebook of mnemonic inscriptions, other lines are traced in light. As dusk falls over London and the contrails of planes dissolve in the night sky, in my mind’s eye I remember and see again the trajectory of a tiny old dog, and the passage of a small inquisitive child; the flex of tree trunks in a forest in the wind; a ship skirting the coast of a Japanese island; the choreography of litter in the Seoul traffic.
The movement of memory. 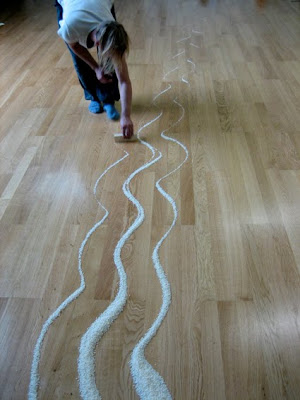