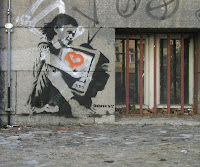 More holiday reading, and another list - this time from a brilliant and acerbic essay by Chris Petit, in a fine new collection called Restless Cities, in which at one point he describes the effect of deregulated television as 'an audio-visual Allied Carpets':

Graffiti by Banksy
Posted by david williams at 17:36