For the past couple of months, in the gaps in teaching, I've been working again with Lone Twin Theatre on The Festival, the final part of The Catastrophe Trilogy. Since early January we've moved around from studio to studio in the south-east of England - The Point in Eastleigh (semi-affectionately known as 'Beastleigh'), New Greenham Arts near Newbury, the Basement in Brighton, and finally the Pit in the Barbican, London. The last two locations have taken us ever further underground, currently in London into the ancient underbelly of the city.

The season at the Barbican (as part of BITE) opens tonight with Alice Bell, then tomorrow Daniel Hit By A Train, and Thursday the premiere of The Festival. All three parts in the trilogy are performed in a 'marathon' cycle on Saturday this week and next (2.00, 5.00, 8.00).

It's been a productive few weeks, involving a lot of talking, singing, writing, getting lost, aching limbs, and a great deal of keepy-uppy, the addictive deferral technique of so many devising companies. At one point we constructed a target for our shonky football skills, a paper Elvis mask taped to a broom; we called him 'Antoine'. After a week or so, his face was creased and worse for wear, as if he'd been up all night.

In retrospect the two weeks at Greenham were compellingly odd, uncanny, for New Greenham Arts is located at what was the Greenham Common air base. The studio in which we were rehearsing was apparently the room in which pilots were briefed. I spent most of one day in that room standing in for Nina who was away, learning her part in an evolving dance structure. The next day, I could barely walk. It seemed both surreal and fitting that we would dance and sing in such a ghosted context, with an awareness of its massively contested existence during the Reaganite '2nd Cold War': the Cruise and Pershing missiles, the 19 year period of the Greenham women's peace camp, not to mention the alleged nuclear accident at the base in 1958.

As Paul Virilio has suggested, every technology 'produces, provokes, programmes' its own accident: invent the car and you also invent the car crash. Ain't it the way. 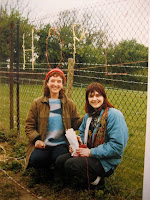 When I came home from Greenham, Sue showed me a picture of her with her friend Rachel at the perimeter fence near the silos in 1981, with the word HOPE stitched in wool into the fence behind them. 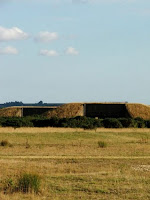 Maintenance Area) are still intact, although the nuclear bomb proof steel doors have long since gone. Today, 19 years after the base closed, these 10 metre high, reinforced concrete silos covered in clay and grass are protected by seven layers of high security fencing, as if the shelters have been mothballed but remain ready, just in case ...

The former nuclear command and control centre at Greenham base, originally designed to withstand a thermonuclear airburst explosion, is currently used by a private company on the re-branded 'New Greenham Park Estate' as an 'ultra secure Data Bunker', its role to 'guard your systems and data from every potential threat that could compromise the availability of your business critical applications'. So, the redundant residuum of Cold War architecture has itself become a commodity in a neat bit of entrepreneurial recycling. And in truth its 'reinforced blast-proof walls', solid steel doors and 'military electro-magnetic pulse protection' look like serious shit in the commercial data protection business (see www.thebunker.net). I feel mightily relieved I don't have any data that merits that sort of attention, and at the same time wonder quite who's availing themselves of The Bunker's services. Evidently the 'perpetual war' of an ongoing paranoid 'state of emergency' persists in other guises.

Meanwhile, just down the road the Atomic Weapons Establishment (AWE) at Aldermaston continues its insidious work, in collaboration with the US Los Alamos National Laboratory in the Nevada desert. Aldermaston's been at the epicentre of British weapons research and development from the earliest British atomic bomb, the 'Blue Danube', tested off Australia in 1952, to hydrogen bomb testing in the Pacific in the 1950s, to the WE177 and Polaris in the 1960s, to the Trident warheads and current research into a new generation of nuclear weaponry in and around its its Warhead Assembly Facility and the Orion Laser Facility.

Makes you proud to be British.

Aldermaston remains the destination for the annual CND march from Trafalgar Square. And a women's peace camp holds monthly protests at Aldermaston. Keepy-uppy.