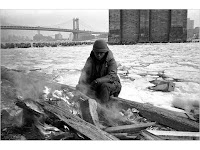 Let’s start by revisiting the bare bones of the performance projects by Taiwanese-American artist Tehching Hsieh, realised between 1978 and 1999. Six projects in all, beginning with a series of five year-long performances. First, one year of solitary confinement in a sealed cell with no communication. Second, a year of punching a time clock on the hour every hour and photographing this action: 24 frames a day for 365 days. Third, a year living rough outside on the streets of New York, drifting and seeking shelter, never going inside. Fourth, one year tied at the waist with a rope to the performance artist Linda Montano, with a prohibition on touch. Fifth, a year spent abstaining wholly from art, its making and its spheres of influence. Finally, a 13-year project in which Hsieh proposed to make art without ever showing it in public, a project during which he effectively disappeared. On New Year’s Eve 1999, at the cusp of the new millennium, in a brief event at the Judson Memorial Church to mark the project’s ending, Hsieh simply told those who had gathered that he had succeeded in keeping himself alive …

The publication of this superb monograph is timely indeed. To date very little of substance has been published about this most remarkable artist and his profoundly unsettling body of work, despite the fact that its contours and challenges are etched indelibly into the psyches of so many involved in contemporary art and performance. We know these deceptively simple shapes, the sculptural forms of the bare bones outlined above, and they are as honed as the shapes of some of Beckett’s most economical work. Or rather we think we know them, for they linger on in unresolved reverberant forms within us. In reality, individually and collectively these works confront and resist claims to knowledge: about art and its parameters; about the passage of time, meaning, identity, freedom; and ultimately about what really happened in the seconds and minutes and hours and days and months and years of these extraordinary ‘lifeworks’.

In a brilliant opening essay, ‘Impress of Time’, Adrian Heathfield contextualises and unfolds the implications of Hsieh’s ‘life lived at limits’ (58) with consummate sensitivity and thoughtfulness. He treads lightly and respectfully throughout, refusing to explain this work away in any singular and inevitably reductive ‘reading’, instead approaching each work in turn not as a referential or symbolic narrative structure but in terms of what it does. In this way, he seeks to articulate something of the affective ‘force’ of this body of work as a ‘constellation of enduring ideas, echoing in the present’ (58).

As well as providing detailed descriptions of each of the projects in turn, Heathfield explores a wide range of such ideas, including: Hsieh’s conception of art and life as simultaneous processes; his embodied instanciations of radical paradox, including the ambiguity of relations between constraint, solitude, freedom and thought in his work, and his deconstructive ‘binding

together of activity and negation, production and redundancy’, public immersion and isolation, movement and stasis (45); the differing temporalities of photography and film, and the unstable epistemological status of documentation; Hsieh’s embodied stagings of an ethics of alterity, relationality and civility; his recurrent engagement with aspects and structures of ‘the law’ (he cites Kafka as a core stimulus), set alongside his vulnerable status as an illegal immigrant in the US; his decelerative ‘wasting of time’ in non-productive and uneventful works of extreme duration, and the critical frictions his ‘use-less’ slowness seem to propose within the accelerated temporalities of late capitalism. En route, Heathfield also traces relations with Conceptualism, Performance Art, Body Art in the West, and connections with a range of other artists including Bas Jan Ader, Harry Houdini, Hiroshi Sugimoto, Abramovic and Ulay, and, perhaps most startlingly as a deterritorialising line of flight, the tightrope walker Philippe Petit. These connective genealogies are invariably and finely attuned to differences, and Heathfield resists collapsing this relational cartography into any homogenising empire of the selfsame.

The bulk of the book (pp. 63-315) is given over to Hsieh’s exhaustive documentation of each of his ‘lifeworks’. Scores, flyers, maps, punch cards stamped and signed, legal documents attesting to Hsieh’s own ‘rules’ having been respected (cells and ropes sealed and unbroken, punch cards stamped etc.), and thousands of photographs. Hsieh also includes calendars registering minor breakings of his strictures, such as hours missed in the punching of the time clock: 133 absences in the total of 8,760, each one catalogued in relation to one of three possible ‘reasons’ - ‘sleeping’, ‘late’, or ‘early’.

Many of the beautifully reproduced images comprise lengthy series of stills cumulatively registering the passage of time, in dated punch cards, say, or gradual hair growth. It’s intriguing to revisit the hourly photographs of ‘Time Clock Piece’ in this print context, laid out on 31 consecutive pages, each page containing 12 vertical columns / film strips of 24 images (i.e. one day per strip, 12 days per page). The lay-out produces an uncanny juddering temporality, and at the same time foregrounds the sheer enormity of the (t)ask. Its astonishing difficulty is somewhat elided in the high-speed, suppressed-hysteria energetics of the 6-minute stop-motion animated film version, within which each day – each column within the book - is condensed into a second (see Hsieh 1999). On the page one can skim and flick, or endeavour to accept it as a kind of meditation exercise: an invitation to engage with the im/possibility of paying attention to each image, to the rare blank spaces when Hsieh failed to make it, and to the infinite blank spaces of the unimaginable 59 minutes or so between each image. The labour of attempting to ‘read’ it as a (ruptured) continuum takes time and real effort. Cumulatively it’s incapacitating, one soon struggles with a kind of ‘blindness’ and defaults to skimming; and in the end we come no closer to understanding what really happened. One recognises Hsieh’s absolute clarity of purpose and will-ful integrity in the work, but ‘he’ is always elsew/here.

Ultimately, Heathfield locates Hsieh as ‘a sentient witness of time’ (11), engaged in practices of ‘aesthetic duration’, with each work ‘a sense passage in which corporeal attention is drawn to (a) time reforming’ (22). Each of Hsieh’s ‘untimely’ projects constructs a space of severe, self-imposed privation and constraint within which time passes and thinking happens. Each performance elaborates a rigorously precise architecture for the event of thought as art; but none of those thoughts are communicated. The internal life of the being in human being - Hsieh’s lived experience of brutalising bare life in extremis - is forever withheld in an economy of denial that serves to create empty spaces for our own projections and dealings with incomprehension. As Tim Etchells puts it in his letter to Hsieh, the extensive documentary traces of the work that survive ‘show everything but tell nothing’ (357). Hsieh moves implacably towards the self-erasure of ever greater illegibility, invisibility and silence to leave us confronted with ‘a sculpture of nothingness’, and we are pulled back endlessly to ‘a face off with the void’ (360). Or, as Hsieh puts it with characteristic economy and lack of sentimentality: ‘Living is nothing but consuming time until you die’ (335).

The book draws to a reflexive end without closure in a long and engaging interview/exchange between Hsieh and Heathfield (‘I Just Go On In Life’), and a series of open letters to Hsieh by Peggy Phelan, Marina Abramovic, Tim Etchells, Santiago Sierra, and others from Hsieh’s personal archive. The latter include a hand-written note from an irate and anonymous Chinese person – ‘Artist? UGH!’ (354); and a delightfully formal letter of support from a (real) estate agent in Michigan – ‘I don’t totally understand exactly what you are doing but I do think it is very important. Keep on with your good work…’ (350). The letters allow different modalities of writing to open up other more intimate perspectives on and creative responses to the work, most effectively to my mind in the exquisitely performative contributions of Peggy Phelan and Tim Etchells. Finally, Carol Becker writes back into and out of the book in an elegant summative post-script, in which she applauds Heathfield’s approach to the curation of these materials. His framing, she suggests perceptively, creates ‘a safe holding environment where the work can rest … The intent of the pieces appears intact, allowed to exist in its emptiness and silence, still elusive even after so much has been said’ (369).
________________________________________ 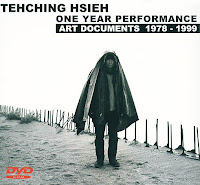 This review of Out of Now was first published in Performance Research 14:2 ('On Training'), June 2009: issue edited by Richard Gough & Simon Shepherd
Posted by david williams at 23:19