burning the house down 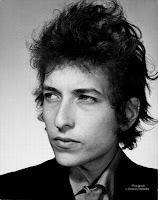 I have been reading Dylan on Dylan, a fine collection of interviews with Bob Dylan from the early 1960s until 2001. Dylan is intriguing throughout: always astute and thoughtful, mercurial, contradictory, sometimes grouchily deflective - and often genuinely hilarious. Sometimes he deals with inept interviewers' questions with playfully unravelling jazzy riffs that bust things right open. This is the only way to keep himself sane, it seems, in a culture that just won't let him be who he is becoming. Repeatedly it constructs the versions of 'Dylan' it needs, then expresses outrage at his having changed.

During a 1966 interview for Playboy with Nat Hentoff, for example, when asked 'What made you decide to go the rock'n'roll route?', Dylan replies:

- 'Carelessness. I lost my one true love. I started drinking. I wind up in Phoenix. I get a job as a Chinaman. I start working in a dime store, and move in with a 13-year-old girl. Then this big Mexican lady from Philadelphia comes in and burns the house down. I go down to Dallas. I get a job as a "before" in a Charles Atlas "before and after" ad. I move in with a delivery boy who can cook fantastic chili and hot dogs. Then this 13-year-old girl from Phoenix comes and burns the house down. The next thing I know I'm in Omaha. It's so cold there, by this time I'm robbing my own bicycles and frying my own fish. I move in with a high school teacher who also does a little plumbing on the side, who ain't much to look at, but who's built a special kind of refrigerator that can turn newspaper into lettuce. Everything's going good until the delivery boy shows up and tries to knife me. Needless to say, he burned the house down and I hit the road. The first guy that picked me up asked me if I wanted to be a star. What could I say?'

- 'And that's how you became a rock'n'roll singer?'

In the same interview, Hentoff asks Dylan whether 'jazz has lost much of its appeal to the younger generation', and off he goes on his own surreal, free-associatin', free-tootin', jive improvisation:

'I don't think jazz has ever appealed to the younger generation. Anyway, I don't really know who this younger generation is. I don't think they could get into a jazz club anyway. But jazz is hard to follow; I mean you actually have to like jazz to follow it; and my motto is, never follow anything. I don't know what the motto of the younger generation is, but I would think they would have to follow their parents. I mean, what would some parent say to his kid if the kid came home with a glass eye, a Charlie Mingus record and a pocketful of feathers? He'd say, "Who are you following?" And the poor kid would have to stand there with water in his shoes, a bow tie on his ear and soot pouring out of his belly button and say, "Jazz. Father, I've been following jazz". And his father would probably say, "Get a broom and clean up all that soot before you go to sleep". Then the kid's mother would tell her friends, "Our little Donald, he's part of the younger generation, you know"'.


Later Hentoff tells Dylan that one 'adult commentator' has referred to him as "self-consciously oddball and defiantly sloppy", then asks his thoughts about 'far-out hair styles'. After bad-mouthing the 'adult commentator', and then explaining that essentially long hair's about warmth ('People with short hair freeze easily'), Dylan's off again, his critical-poetic mind runaway:

'I guess if you figure it out, you realize that all of one's hair surrounds and lays on the brain inside your head. Mathematically speaking, the more of it you can get out of your head, the better. People who want free minds sometimes overlook the fact that you have to have an uncluttered brain. Obviously, if you get your hair on the outside of your head, your brain will be a little more free. But all this talk about long hair is just a trick. It's been thought up by men and women who look like cigars - the anti-happiness committee. They're all freeloaders and cops. You can tell who they are: they're always carrying calendars, guns or scissors. They're all trying to get into your quicksand ...'