the tears of things (for pina)

In no particular order, some images, culled from a reservoir that has coloured and buoyed my imagination for 20 years or more. These (and others) are indelibly etched into my psyche, and they proliferate and animate still: in my 20s and 30s, this work changed everything for me...

A group of women scurry across a leaf-strewn floor in pursuit of a man who plays the same short extract from Bartok's Bluebeard on tape. Rewind, replay, shuffle. Later, a slow somnambulist dance of partners, the women bowed and passive, their faces hidden, the almost-naked men masquerading their bodies - performing body-building poses to the audience, displaying them to both comic and alarming excess (1).

A woman in her underpants walks through a field of carnations playing an accordion. Around the edge of the field, guards patrol with alsatians on leashes. Later, Lutz Forster 'signs' the Gershwin song The man I love. Comedy and pathos in this overlaying of nostalgic heterosexual song and signing. The overlay doubles and re-doubles the song's lyrics, making them un-familiar and re-writing them. The male body mimes and 'tells' - through an iconic corporeal discourse of a possible love to which a dominant ideology is metaphorically 'deaf'. Forster himself is both source and site of the narrative, and detached from it, consciously showing/dis-playing it to us (2).

A group of besuited men repeatedly touch a solitary woman (Meryl Tankard) like a child - pinch her cheek, tousle her hair, pat her. Cumulatively over time, their actions constitute a kind of rape; intimate, patronising 'affection' is defamiliarised through repetition to reveal the shadows this infantilising tactile economy suppresses (3).

Two dinner-suited men, smug, self-congratulatory, mask-like smiles, posturing an image of suave gentility, wealth, sophistication. Then they squirt or dribble little fountains of champagne from their mouths - straight up, splashing down over their faces and suits, 'wetting themselves', like children. A kind of critical comic display of the infantile drives that underlie and inform their masquerade (4).

An environment of towering, bristling cacti, peopled by a discontinuous dream-like array of figures. Couples waltz. Passers-by pass by. A woman in bra and pants hangs immobile and upside down, her body apparently suspended from a cactus's spikes. A man force-feeds a woman, like a goose, coercing and constructing her; she lies inert. A man in a balaclava wheels another woman around the space in a glass tank of water; it's uncertain whether she has drowned or is dreaming, her body literally floating through space. A man in a skirt, shades and a leather jacket dances alone. A woman with two black shoes in her mouth struggles repeatedly to lift herself from the floor. A blindfolded man dances alone, a tea bag held over each eye by a red cloth, his partner a tea towel. Then there's a dancing pantomime walrus, and a group standing as if ready for a rather odd family portrait: a masked woman (one of those 2-dimensional Victorian paper cut-outs sometimes used for parties); two others beside her, their hats suspended above their heads, as they wriggle to fit inside them; and a slumped woman on a chair in front, her hair covering her face (5).

A man struggles across a field with an enormous wardrobe balanced precariously on his back. A drunken woman with a bottle in her hand shouts and lurches at the centre of a flock of sheep; the sheep respond to her every move, instantly and collectively, her impulses rippling out through this animal corps de ballet. A man, gravity-bound, chases a flock of starlings as they swoop and soar. Dominique Mercy in a ball gown, pinned to the wall of a room by a model helicopter hovering in front of him, buzzing him, its whirring blades pushing an updraft under his skirt (6).

A woman with impossibly long limbs and hair, a spectral somnambulist presence in a white night slip, dances through a maze of tables and chairs in a deserted cafe. A man clears her passage, his attention to his task all-consuming and selfless (7).

The everyday defamiliarised. The image as aggregation: the conjunction of bodies, objects, rhythms, music, space as psychic landscape. Even smell (the peaty earth in Rights of Spring). Bachelard's 'material imagination'. Brecht's gestus ablaze, signalling through the flames (8). Accumulation and repetition (what repetition?) Masquerade. The voyeuristic economy of spectating: the 'dis-play' of performing. Montage. E-motion: the continuous leak of affect. Excess. A corrosive theatricality. Irreducible ambiguity. Layers of fragmented narrative. Reversals. Ec-static exposures, uninsulated. Identities on the move. Possible worlds. The heart-land laid bare, in its resilience and fragility.

Love's work, its grain, its shapes.
The tears of things. 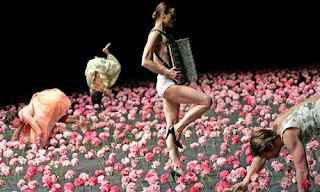 Notes
(1) Bluebeard.
(2) Nelken.
(3) Kontakthof.
(4) Two Cigarettes in the Dark.
(5) Ahnen.
(6) Die Klage der Kaiserin ('The Lament of the Empress').
(7) Cafe Muller.
(8) 'Gestus is at once gesture and gist, attitude and point: one aspect of the relation between two people, studied singly, cut to essentials and physically or verbally expressed. It excludes the psychological, the sub-conscious, the metaphysical unless they can be conveyed in concrete terms' (Brecht).

To watch Lutz Forster's The man I love (from Chantal Akerman's 1982 film One day Pina asked me...), see here

For a listing of other Pina Bausch materials on YouTube, see here