'And when today he lights up a cigarette, he uses a flintstone and a fuse, like everyone else. "In a boat", he says, "that is the best way. The wind blows the matches out, but the harder the wind blows, the more the fuse glows" (Walter Benjamin, 'Spain, 1932'). 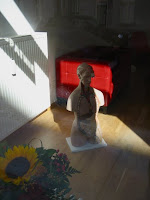 Over the last week or so, I have been in Berlin, then working at the Tanzfabrik in Potsdam with two choreographers and a video artist. Berlin, with its historical layers, its open spaces, slow rhythms and laidback feel, its adventurous contemporary architecture alongside older buildings, is a perfect city for drifting, and S and I walked and walked. The city is ghosted by so much that lingers in collective European psyches: the rise of fascism and the Second World War, its post-war isolation, the wall and its collapse, the reunification of Germany. Then for me there are other layers from German film, from Christiane F and Wings of Desire to The Lives of Others. When I first 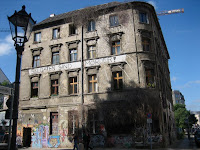 went there, Berlin seemed melancholic, hovering on the lip of hallucinatory slips and tears in time; turn a corner past the grooviest little gallery you ever did see and there's one of the synagogues that was trashed during Kristallnacht, or the site of book-burnings by Goebbels's henchmen, or the pock-marks of bullets in walls, or Boltanski's golden bricks naming those who lived in the missing building erased by a bomb, or the line where the wall once stood, or the golden angel from where Bruno Ganz's angel surveyed mortal humanity in a divided city. And yet it is full of space and

light, and change; there's a sense of optimism, of something beginning. Although officially bankrupt, the city feels dynamic and shifting, its sediments on the move, offering up a kind of archaeological mapping of 20th century histories and the morphing cartographies of the new Europe. It is a graffitied memory machine with an eye on the future, and it has creative juice.

Of the countless new buildings in the city, Daniel Liebeskind's zinc-covered Jewish Museum is perhaps the most astonishing, structured like a zigzagging bolt of lightning or an angular line of fire, with gashes in its blue-grey outer skin. Some commentators have read its form as a 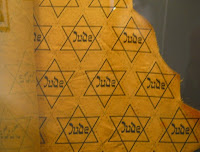 fractured and dispersed Star of David. (The photo on the left, from the museum, is a bolt of cloth produced by a German manufacturer and printed with the yellow stars the Nazis forced Jews to wear). During the development of this project, Liebeskind (ever the conceptualist) had drawn straight lines between addresses on a street map of Berlin around the museum's location, land abutting what was the line between East and West Berlin; in this way he traced invisible links between Kleist, Heinrich Heine, Walter Benjamin, Paul Celan and others to produce an 'irrational' matrix or constellation of Jewish culture here in the form of a distorted star. He also employed Benjamin's 'urban apocalypse' One Way Street as a structural model, its 60 sections incorporated into the zigzag. Liebeskind has called the project 'Between the Lines', and in part his conceptual and structural (one might say 'dramaturgical') starting point seems to have been two lines and their shifting relations: 'One of the lines is straight but fragmented, while the other is winding but never-ending ... They move apart, become detached and are perceived as being separated from one another. They thus reveal a void'. The spaces between cultures and their people, the trajectories of shifting historical 'destinies', producing an unstable relational axis of tensions and encounters. The straight line cuts through the zigzag, and creates a number of empty spaces: charged zones of remembering and forgetting, of contemplation and mourning, of potential and disappearance in the aftermath of what Blanchot called the 'utterburn of history'. In particular, the Holocaust Tower and the Garden of Exile, spaces of uncanny embodied affect. In their configurations, materials and relations to light, they do things to you. The 'fuses glow'.

In the vast, cold, concrete wedge of the Holocaust Tower, Liebeskind's 'voided void' with its unnerving door illuminating the passage of people entering or leaving, then shutting with a terrible click, daylight enters through a slit from the outside at the very top of a tightly angled corner (impossible to enter and inhabit this corner, like the bow of an abandoned ship). One 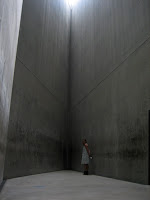 looks up for the release of sky, of outside, and fragments of everyday sounds drift into the space - life goes on elsewhere, but one cannot see anything of it here. A kind of blindness. This looking up is a straining as if one is interred underground. A metal ladder runs up a side wall at the other end of space; but it is functionless, little more than an emblem of futile im/possibility, it's much too high to reach. It supports a few tiny, fragile spiders' webs. The walls are chilly. Everything in the field of vision is monochromatic, shades of grey. People's movements are slow, quiet, restrained, private; we look isolated and a little spectral in the shadows, tiny craning figures dwarfed by the monolithic brutal planes of this 80-foot high silo. Space as sculpture, memory as form, architecture as music - but here all decoration is cauterised, erased. A 'writing of the disaster' in bare concrete and light. A dead end.

Elsewhere in the building, there is a staircase that leads nowhere. 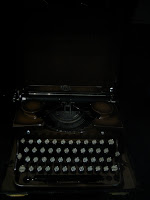 At the end of an underground passageway sloping upwards past minimal traces of shattered lives, a minimal selection of personal possessions and mementos of great intimacy: a child's tiny toy monkey, an exquisite typewriter, a sewing machine, letters, photographs - past listings of death camps and diasporic destinations from Sydney to San Francisco - at the end of this gradual ascent, a glass door leads to the Garden of Exile. 49 rectangular concrete pillars 10-12 feet high placed in a grid equidistant from each other with rectlinear passageways between them. The ground is angled, the pillars just off vertical, and one's balance is slightly thrown; it feels out of kilter, not quite 'right'. Oleaster is planted in the tops of each column, 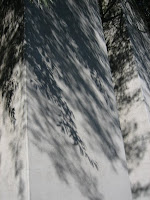 its foliage casting moving shadows over the grey surfaces; they soften the pillars somewhat and provide a kind of fragile shelter, a canopy of something displaced still living and moving. Again, a space of slowing down into associative memory and contemplation, its configuration producing palpable effects on perception, orientation, the angle of the spine, rippling movements of emotion around one's slightly altered axis. Body weather.

Liebeskind's garden directly prefigures some of the formal and affective qualities and implications of Peter Eisenman's Holocaust Memorial on Cora Berliner Strasse near Potsdamer Platz, which was opened six years later than the Museum in 2005. There too you move in canyon spaces between concrete slabs on uneven sloping paths the width of a human body, but an explosion in scale as occurred. No longer a garden, for only a few isolated trees are 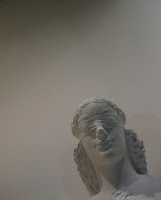 planted in a proliferative field of grey slabs - over 2,500 of them. When you enter the memorial, you disappear into the slabs, as if engulfed in ossified grass or a vast frozen grey wave, and the city recedes. Inside there are shafts of light, shadows, cobbles and gravel, walls of infinitely shifting textures and greys, fleeting glimpses of other people, kids running and playing. In some ways, it seems an anonymous empty environment from which the personal has been erased. Underground, shadowing the memorial on the surface, is an information centre about the Holocaust: the Room of Dimensions, the Room of Families, the Room of Names, the Room of Sites ... 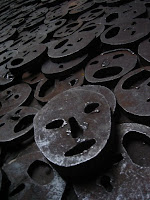 The fifth and final void in Liebeskind's building houses the Israeli artist Menashe Kadishman's installation Shalechet ('Fallen Leaves'). More than 10,000 flattened, round, mask-like faces cut from thick sheet steel, frozen into expressions rather like Munch's screamer, or emotionally blanked, lie scattered on the floor of another towering empty space, and we are invited to walk on them. Schematic eyes, nose and mouth, yet somehow individual and vulnerable (much more so than the sheep Kadishman has so often painted). All of them the same, anonymous, and yet slightly different - in expression, shades of autumnal rusting, sheen, scarring. ('The face is only the frozen moment of the rising oars or their dip into the sea' - Edmond Jabes, The Book of Questions). One becomes hyper-aware of the implications of one's weight and movement as the negotiation of this uneven, peopled surface inevitably generates sudden metallic groans and clankings amplified by the space. Dissonant, angular trajectories. Some 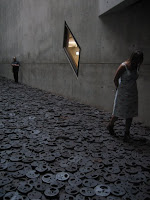 people move imperceptibly slowly, hesitantly, trying to be light, careful, silent - to be attentive to the implications of their actions in this field of ruins, and present to the recognition that their weight, their life rests on the silent screams of others; others scamper in, posing for photos with one of the heavy heads in their hands as if it is laughing with them. Snap. At the far end people disappear under an overhang and dissolve into shadow. It feels like a setting for a piece of expressionist dance, for the terrible beauty and psychic dis-ease of Pina Bausch's tanztheater. I imagine a woman with long hair emerging quietly from the shadows and running, running, then walking, standing still as a tree, waiting, listening to voices, listening eyes open, breathing.

Later, in an old communist apartment block in Potsdam, I watch the exquisite videos Julien made in Japan and South Korea, and a compellingly weird documentary about North Korea. I read Junichiro Tanizaki's In Praise of Shadows: some beautiful perceptions and propositions about the shadowy depths in lacquerware, Japanese architecture, beneath the skin in faces - although at times it reads uncomfortably like the grumblings of a reactionary old man in an imperialist culture that was both fading and on the eve of war. And I take notes from an interview with Tanaka Min, who my collaborators visited on his farm in Japan. Min describes his 'ambition to extend the horizon of a fleeting moment' and his 'sole aim - simply to be a sensitive surface':

In Western dance, they are fascinated by only movements. All the time nice movements. Is this dance? I think that dance is not visible ... I do not dance in the place, I dance the place. Place is where I am able to stare at my own corpse ... We have not yet really been born. We are forever imperfect ... Molecules that produce energy are tempted to dance thanks to the interaction between subterranean magma and life on earth. I am just there, caught in the exchange ... My work, when finished, leaves nothing behind; I stay with ever changing life, and will leave nothing behind ...

And this, from a transcription of a conversation with Tatsumi Hijikata: